Kofi Kingston is a positive dude who gives off positive vibes, so you believe him when he says that he doesn’t really care whether he is working as a singles wrestler — after all, he’s the current WWE Intercontinental champion — or in a tag team.

In conversation with SLAM! Wrestling before Survivor Series, Kingston talked about role in World Wrestling Entertainment.

“I really don’t have a preference as far as tag team wrestling versus singles competition,” Kingston said. “They both have their benefits.”

Recently, Kingston was in a championship pairing with R-Truth. 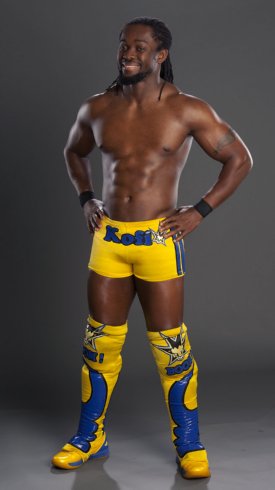 “Tagging with R-Truth was awesome for me. Even in our interviews, we had such an interesting dynamic,” he said. “I think we got grouped together because it was like, ‘Oh, these are two guys who are athletic and entertaining, let’s put them together and see what they can do.'”

R-Truth and Kingston held the tag belts from April, beating Primo and Epico, until September, losing to the current champs, Daniel Bryan and Kane.

“We fit together like hand in glove, is what he always said. He’s real entertaining, and I learned a lot from him,” Kingston admitted. “A lot of people don’t realize that Truth has been in the business now for almost 15 years.”

Kingston was also a tag champion with Evan Bourne, and they were known as Air Boom. The team was derailed on a couple of occasions when Bourne was suspended for violating WWE’s Wellness Policy. Then, in March, Bourne was in an accident and is trying to fight his way back, said Kingston.

“He’s been doing a lot of rehab for his ankle,” began Kingston. “Evan was actually in a motorcycle accident where he broke every bone in his foot, damn near. It’s been a long journey for him to get back. He’s a real positive guy and I think he’s going to be just fine. When he gets back, he’s going to be right back to being Evan Bourne and doing all kinds of incredible things. It’s just a matter of time. I’m not sure what the timetable is, but I think he’ll be back, hopefully sooner than later. I know the WWE Universe is really missing him. He wants to get back too.”

What is it going to take to get Kofi Kingston into the main event picture, maybe battling Punk?

“Everybody has their own story on how they get to the top,” he explained. “Some of the people come in and they’re kind of given that, I don’t want to say given, because we work for everything, but a lot of people have the machine behind them more so than other people, if that makes sense. And some people have to do it the hard way, just work and keep working.”

Every day that he goes to work, especially the TV tapings, is about walking into the unknown.

“I have no idea what’s in store for me. I can’t control what’s being written or my role in the show is going to be,” he said. “What I can control is being out there and putting on the best match possible. That’s my goal, to be able and go out and entertain to the best of my ability every single night. If you keep doing that, you really can’t be denied. I just take it one day at a time and just worry about that. As long as I can go out there and be in front of the WWE Universe and do what I love to do, I’m always trying to get better — if you’re not getting better, you’re only getting worse. If I keep doing what I’m doing, I do believe I’ll be exactly where I need to be, so it’s just a matter of time.” 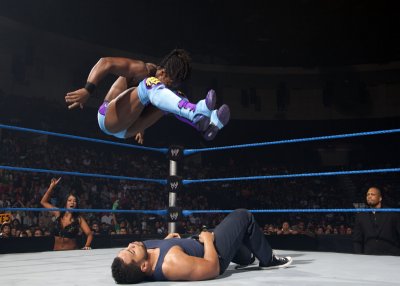 Kingston and the whole WWE crew recently got back from a two-week European tour.

“It is very grueling, but at the same time, it’s very energizing because we don’t get to go to these countries but once or maybe twice a year,” said Kingston. “When we get to the arenas, most of the time the people are just really excited to see us, so the environment is unlike anything you’ve ever felt before. So it really gets you through to the next night. You’re not really thinking about how tired you are when you’re in the ring and you’ve got people cheering for you and very excited to see you. It’s great for us because we get to see different parts of the world and we see a different part of the WWE Universe.”

The reaction of the fans in Birmingham, England, was incredible for a recent Monday Night Raw.

“This is what we live for, to be able and go out and do what we love to do, and be appreciated for it,” he said. “It makes us feel like we’re doing our jobs right, and obviously we are because you look out at the crowd and you see people just coming together, you see kids with their moms and dads, you see whole families out there, you see college roommates, a bunch of the guys coming out, some of the girls coming out too. Everybody is in this arena together and we brought them together.”

There are plenty of hassles with travel though, including this go-round, an American election.

“We had to send in our absentee votes. You find as a WWE superstar that you have to plan ahead a lot,” Kingston explained. “Even with something simple, like your bills. It’s a lot easier now with a lot of things online you can pay. But you have to be on top of your stuff, more so than the average person, because our lives are anything but routine. We’re in a different city every single night. Finding a gym to work out at. Being able to eat right. We get out of our shows so late that all that is open is fast food, which is fine for me, because I’m always trying to eat a lot of calories. But you have people that are trying to eat healthy and the only thing that is open is McDonald’s and Wendy’s, Arby’s, so it’s a lot harder to eat. So there’s definitely a lot of traveling frustrations but everyone falls into their own groove and you figure it out.”

Kingston has his eyes on some of the wrestlers on WWE developmental deals, a couple of whom have just graduated to the main roster.

“I live in Tampa, so I’m actually right down here in the mix with everything,” he said. “On the live events, we actually have guys from developmental come up quite a bit and do a loop with us on the weekend. So you get to kind of see who’s ready, who might not be ready. There’s a lot of talent down there, man. Big E Langston is a really big, impressive guy. Seth Rollins, obviously — not sure if he still is the NXT champion, but he was when he came on the Egypt tour with us. He looks to me like he’s ready to be up there. Dean Ambrose. There’s a lot, a lot of talent that I think the WWE Universe if really going to be in for a treat once these guys come up. They’re really good, really good. It’s really exciting to see the promise that is in developmental right now.”