The WWE creative team, and specifically Vince McMahon, have been hailed as at times both genius and out of touch with the fans. Sometimes those two things might even go together and lightning gets caught in a bottle — as it did in the famed Attitude Era of the World Wrestling Federation.

The Attitude Era, for those that weren’t watching or are too young to have been a part of it, existed during an undefined span of years (most often generalized as starting in 1997 and ending in 2001) in which the WWF infused their product with more shocking and adult-themed material than had previously been offered.

It has also been viewed upon lately by a growing number of fans as a sort of golden age, beloved for its TV14 rating, and is held up as a gold standard of what the WWE could be today. This is not a view held unanimously, of course, but is certainly posited by those whose first exposure to pro wrestling came with a slice of attitude. 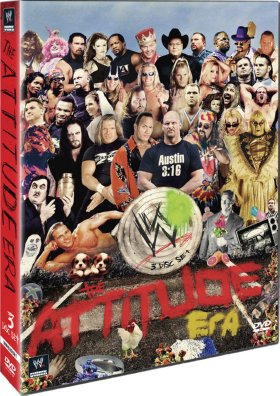 And so, let it never be said that the WWE doesn’t listen to their fans, as they deliver a DVD and Blu-Ray capturing the highest points of the Attitude Era, featuring the lewdest and crudest moments sure to satiate the appetite of those hungriest for a dose of the past.

In that sense, the purpose of this compilation, WWE: The Attitude Era, is what makes it a satisfying trip down memory lane but a one-sided puff piece that feels hastily produced. The WWE has truly raised the bar for its own compilation videos with its insightful and balanced treatments such as that given to the history of WCW, but it has also produced some overt attempts at capitalization like its WWE’s Superstar Collection series, which includes relative newcomers Sheamus and Kofi Kingston, striking while the iron is hot for the sake of cashing in on a popular trend.

There’s also another style of WWE compilations: the manifesto. In releases such as The Self-Destruction of The Ultimate Warrior, there was only one side to the story (not The Warrior’s), and WWE: The Attitude Era is sort of a combination of these last two styles.

To put the era in context, the documentary feature on the first disc (running at a svelte 45 minutes) runs through the great success of the WWF in the 1970s and ’80s, then with a single statement it dismisses the early-to-mid ’90s as “the WWE suffered through its lowest point in history.” Vince McMahon’s video message from December 15, 1997, expressing the desire to not let the audience have their intelligence insulted by simplistic storytelling is noted as a potential starting point for the Attitude Era.

That message reveals something about how the WWE looks back upon its own history. One might say that it takes courage to say “what we’ve been doing isn’t working and it’s time to change,” but on the other hand, if the audience’s intelligence was being insulted, then who was doing the insulting? The WWE has a way of absolving themselves of any conceptual attempts that failed, and just motoring on to the next thing.

In other words, yes, they told you in the early 1990s that you were watching a great product, but they told you in the late 1990s that you really weren’t, and now you’ll get the great product. It’s a little showmanship and sleight-of-hand, but it doesn’t seem to bother anybody. Jim Ross is one of the first on-screen speakers and credits McMahon with the vision for the edgier product; but just remember it was edgier compared to McMahon’s previous vision for the product.

The most logical inspiration for this shift in creative direction is attributed to the Monday Night Wars, which allowed the wrestlers the freedom to push boundaries previously untested in an environment which, as Triple H suggests, left them all with nothing to lose. Some, most notably Mick Foley, express concern that things either went too far or at least were only done for the sake of shock value rather than for storytelling, but the majority of performers look back fondly upon the freedom.

Jesse James, for the record, recounts a story of parents encouraging their four-year-old son to come up and say “Suck It” to him, for which he refuses any culpability and suggests the parents were in charge of things like that. Both he and Mark Henry admit that they wouldn’t let their own kids watch the kind of show that they themselves starred in — but that doesn’t diminish their appreciation for it.

Comments are also made by some that seem surprised at how college-aged fans were taking the show up as their new thing, but it stands to reason that these were, in large part, the same fans that had grown up as kids watching the more family-friendly product and were simply now ready for the new attitude.

The film takes a very quick look at backlash against the new direction, but ultimately defends any offensive material in the name of progressive entertainment. This leads to one of the greatest spins you’ll ever hear from a wrestler, as Mark Henry looks back on his affair with a transvestite. He claims that people come up to him all the time and say how cool he was for being comfortable with homosexuality, and he realized he may have inspired somebody to be more comfortable about themselves. All of that from a skit where he vomits after finding out the woman he was with was a man, in what was hardly a testament to tolerance.

This kind of spin is what keeps WWE: The Attitude Era from becoming an engaging investigation into why it worked then and why it stopped working later on (as much as people may pine for the TV14 era, ratings and interest began dropping before the rating level did). Successes from the period are championed, and failures (Brawl for All, for example) are acknowledged but glossed over and justified as worthwhile experiments without digging into why this period in time clicked.

James, Henry, Foley, and Jim Ross carry most of the commentary, with secondary roles filled in by Steve Austin, Big Show, Triple H, Christian, and Pat Patterson. The Rock gets a few words in and Vince Russo puts in two cents. Of all the missed opportunities in this set, not hearing from Russo on why he thinks some things work and some don’t is the most glaring.

The extras will give most fans just what they want: a collection of promos that started giving the wrestlers freedom to swear and shoot from the hip, alongside matches sprinkled throughout the years of this relatively short stretch of time that has achieved a highly revered status and seems to have taken place a lot further back in the past than it really did.

This DVD/Blu-Ray set likely won’t make any new fans for The Attitude Era, but as for its design as a chance to relive what was certainly a different landscape than what is offered today, it’s going to be a perfect gift for those waiting on yet another DX reunion. Those fans should take heart, because everything old will be new again at some point; and maybe this production is a marker of the inevitable change in focus that the WWE will once again undertake.