“Canadian Bulldog” is a working professional in the Toronto area who has a sort Jekyll & Hyde thing going. By day, he works as a business journalist with a background in editing community newspapers and newsletters. By night (and whenever else he can fit it in), he is an inept wrestling “mark” who bombards professional wrestlers and their associates with outrageous prank e-mails.

SLAM! Wrestling caught up with Bulldog after the release of his self-published anthology, Thanks for the Compliment!!! Canadian Bulldog’s Nuttiest Letters Ever! EVER!!! and was fortunate enough to speak with the business journalist side of his personality.

“My character is like an eight-year-old mark,” Bulldog explains. “He doesn’t know the difference between what’s a work and what’s not. He gets almost all the names and facts wrong.” Using this shield of ignorance, Bulldog manages to write some very funny letters and get even funnier responses from some of pro wrestling’s biggest names. The fun part of the book is that he does it without a hint of nastiness, generally refusing to get into any insulting exchanges with his targets. 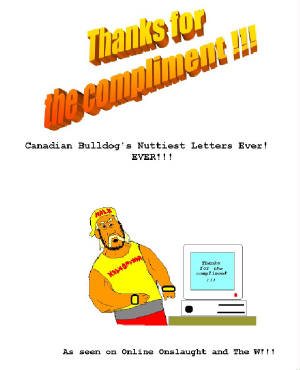 The main reason for this “clean fun” approach is that Bulldog has respect for the people he’s pranking. “If somebody was to email you or me and ask some of these ridiculous things, you would only expect to flip out. Most of them just ignore the email. I don’t take it personally — these people are quite busy in their personal lives and careers, and I’m just happy to get any kind of response. But the more frustrated they get the better it is for me.”

It’s possible that the most frustrated wrestler in Bulldog’s compilation is New Jack, who did not respond well to the request made of him. “I asked him to show up at my grandparent’s 50th wedding anniversary and jump off of a balcony,” Bulldog recounts, “and just the pure profanity of his response was wonderful.” In that sense, Bulldog is playing himself off as a traditional heel character — he wants the jeers that come with pushing the right buttons.

Sometimes, he’s pleasantly surprised by how much attention he receives in return. “I accused Brian Kendrick of pocketing my wristwatch,” he says of a particularly funny e-mail exchange. “The fact that he took time out of his day to write such a long response, I thought that was amazing.”

Bulldog had been posting his letters in columns on Online Onslaught and The W when he started seeing potential to take his joke even further. “When I started off doing this I would email somebody and get a response, and then I would just leave it,” he remembers. “And then I got advice from people reading the columns to see how far I could take some of these things.”

This testing of limits is evident in such exchanges as letters between Bulldog and “Webmaster Kurt”, who responded to Bulldog’s inquires for putting “Playboy” Buddy Rose into a Diet Supplement infomercial. “[Kurt] was passing off Buddy Rose like he was Ted DiBiase or something, with his limos and how he cleans up at the casino. The guy just got on my nerves and I’m sure I got on his nerves as well.” It was the only really nasty discussion in the book, and as such it was interesting to read as Bulldog dropped out of his character for a moment to trade down and dirty insults with one of his targets.

It’s safe to say, however, that Bulldog doesn’t get personal unless the person on the other end starts it first. In fact, Bulldog is very cognizant of the fact that he is getting positive responses from some wrestlers who are truly in tough circumstances and looking for work. “You’ll notice a recurring theme that if I see [interest], especially from someone who is struggling a bit, I’ll kill it off pretty quickly,” he admits. The usual story is that a board of governors or investors change their mind and the show Bulldog was planning falls apart. Still, it’s pretty flattering to Bulldog that he does get taken seriously at time. “There was [a response] from Malia Hosaka where I was promoting a show in outer space,” he remembers with a laugh. “I tried that one on a couple of people and got no response, and didn’t expect any. When I got her totally buying into the idea I was blown away.”

It isn’t just that wrestlers will occasionally respond with genuine interest, either. Some will respond with info as personal as a home phone number and other details. “I’ve got a list of contacts that would make some independent promoters jealous,” Bulldog brags, admitting that he was a little taken aback by how responsive some of his targets were. “With some of them I could understand as they are legitimately looking for work. When you get a home phone number for Bobby Heenan, a guy that doesn’t need the money — that was surprising.” Building the initial list of contact emails was easier than Bulldog was expecting. “The emails just come off of the wrestler’s own websites. Some of it is a bit of research and guesswork, and sometimes I go through the agents and managers.”Bulldog has been following wrestling for 20 years, ever since his grandmother introduced the sport to himself and his brother. Now Bulldog has a nearly five-year-old son named Noah, who gets a special dedication in the opening of the book. Does this mean that Noah sits down beside his dad to watch wrestling these days? “Absolutely not,” he replies without hesitation. “When I started watching it in 1985 it was a lot tamer than it is now. There’s so much adult content in it now.” He also laments the lack of humour, or at least the lack of successful attempts at humour, in today’s wrestling. “The companies very rarely try and make something funny that actually succeeds. When the WWE tries to do something funny it tends to make you groan. If you go back to the Attitude era there were definitely things that worked.”

A lot of Bulldog’s humour does work, thanks in part to the consistency of character which is evident throughout the book. Along with certain running jokes and catchphrases, Bulldog also fashions his replies in a deliberately predictable manner, a technique that allows the reader to share in the fun of the e-mails. In the end, after all, these letters are just about having fun, as Bulldog explains: “When I first started doing this, my brother said I’ve got to do a book, but I wasn’t convinced. I never had any big fancy plans for this. This was just something where I had the content, and it was just a matter of putting the stuff together.”As to the future of Bulldog and his pranks, he doesn’t see them taking over from the writing job that forces him into using his alias. Considering that all of this stems from little more than a part-time hobby, he’s been overwhelmed with the positive response he’s received to the release of his book. He is also planning on taking his comedy writing to the next level. “I’m starting a parody of all the wrestling biographies that are out there,” he explains, clearly enthused about the concept. “I’m making it about my career — which technically never existed.”

Seeing as Bulldog’s strength is in making up people and events and making them funny, a phony biography seems the next logical step. (Though Kane’s just-released WWE biography fits that bill too.) If he can then continue to put out solid material, a legitimate biography might be in order some day — minus the phony name, of course.