The rich hobby of wrestling cards

Wrestling trading cards have been around for more than a century, and the recent announcement of a Topps-WWE collaboration gives collectors a new reason to celebrate.

The agreement between World Wrestling Entertainment and Topps trading cards, which was announced earlier this month, will see the popular sports and entertainment card company produce a variety of sets devoted to WWE’s past and present stars. Prior to the agreement, Topps’ United Kingdom division had been releasing WWE cards exclusively in Europe.

Topps is no stranger to the wrestling card market, having produced cards throughout the post-World War II era.

Because of wrestling’s trading card history, Luraschi believes that the new sets will be popular with the young and old alike. “Similar to our sports products and our Star Wars products, wrestling is a property that involves a multi-generational sharing of experiences, fun and collecting among children, teens, parents and grandparents,” Luraschi said.

The first set under the new agreement will be Topps Heritage, a popular brand in their sports and entertainment lines. Luraschi believes that the appeal of the Heritage line will cross over well to the new WWE product. “Building on Topps’ successful marketing of our Sports Heritage brand, that we successfully extended to our Star Wars Heritage product in 2004,” Luraschi said, “our 2005 WWE Heritage product is going to incorporate vintage designs in showcasing a blend of current WWE Superstars, Divas, and WWE Legends from the past … that young and old can share the fun of collecting together.”

Packs of Heritage cards are set to carry a suggested retail price of $1.99 USD, a number that should help sales that have stuggled in recent years. “Few cards sell nowadays due to the high per pack price,” said Dave Gannon, organizer of the upcoming Great Canadian Wrestling Expo. 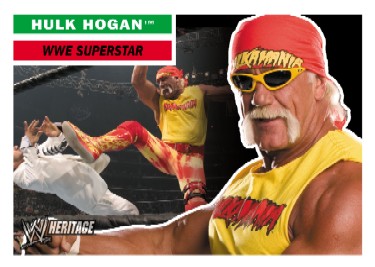 A Hulk Hogan card from the 2005 Topps Heritage set

Prior to creating its first stand-alone wrestling set in 1951, Topps issued its first mat wars cards in 1948’s Hocus Focus product. Among the cards found in that set were Stanislaus Zbyszko, the Masked Marvel, Tony Galento and others.

Since that first effort, Topps has produced cards of the greats in the wrestling industry on and off for a number of years, creating a variety of sets which children of all ages will remember vividly. Among those are WWF sets produced in the mid-1980s, which were created in Canada by sister company O-Pee-Chee.

Before Topps acquired their latest license, WWE trading cards had been produced by Fleer/Skybox International. The company had produced a wide variety of sets in the late 1990s through the summer of 2005, when they went out of business. During their run, Fleer brought a number of innovative cards to the hobby. Among these were memorabilia cards, which feature a swatch of material from a wrestling event, be it a competitor’s trunks, a valet’s ringside attire or the mat itself.

WWE has also had a trading card agreement with Classic Games Inc., Action Packed (who were the first company to include certified autograph cards in a wrestling product), Comic Images, while WCW cards were produced by Impel and Cardz Distribution during the pre-nWo years. To this point, only one card set has been created that features the stars of TNA. The set, released in 2004, was created by the now-defunct Pacific Trading Cards Inc. Cards have also been produced in Japan and Mexico, featuring the top stars of puroresu and lucha libre.

Wrestling cards, in fact, date back all the way back to the early 1900s. There were a variety of pre-World War II wrestling cards produced that were distributed in cigarette packs. These cards, however, primarily focused on amateur and Olympic wrestlers. Among these was a 25-card set known as “Wrestling and Jiu-Jitsu.” The set was created in 1913 by John Player and Sons, which was a division of the Imperial Tobacco Company of Britain and Ireland. Also popular in this era were Exhibit cards, which were produced from the 1920s through to the 1960s.

Following the cigarette card era, three companies produced wrestling card sets, including Topps, Exhibit, and Canadian company, Parkhurst. Parkhurst, a name familiar to hockey fans, is credited with creating the first “parallel” cards in the wrestling hobby (cards which look similar to standard cards, but have differing elements such as colour or photos), as several cards pulled from packs had offers for various toys.

A variety of other card-type collectibles have been produced over the years, including premium cards inserted in bags of chips, magazines and boxes of ice cream bars. Recently, WWE has been creating photo cards that have been inserted into their DVDs. Other collectibles include stickers and POGs.

Collectors can get a preview of the Topps Heritage set by picking up promotional cards featuring WWE Champion John Cena. 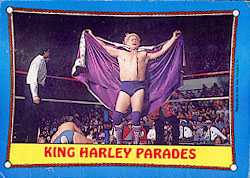 Topps and O-Pee-Chee created WWF cards during the 1980s, including this Harley Race card from 1987. 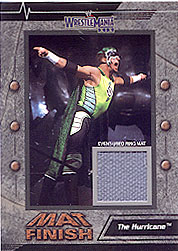 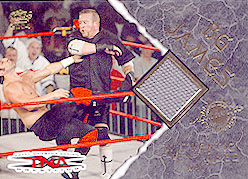 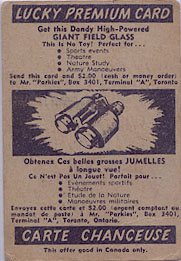 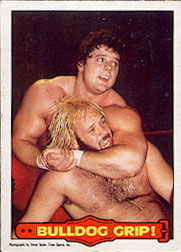 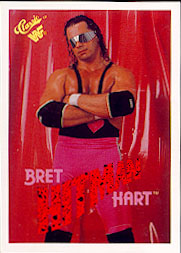 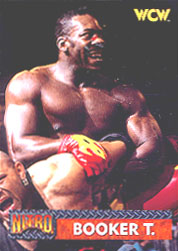