A new face will be seen on screen tonight on Impact Wrestling, one that fans of the promotion should get familiar with.

King Mo Lawal, the former mixed martial arts champion, will debut tonight on Spike TV as he prepares to be the special guest referee for the street fight between Bobby Roode and James Storm at Bound For Glory.

“I was watching TNA with my boys and Hulk Hogan was in the ring and we were talking,” Lawal said. “I wasn’t paying close attention and then I’m like, ‘Did Hulk Hogan just say King Mo?’ So I rewound my DVR, thank you DirecTV, and I heard Hulk Hogan say we’re gonna bring in King Mo and I almost fainted. That’s when it hit me. … Live TV for TNA, I almost fainted. I’m still scared. My armpits are sweating, I can’t sleep. I’m nervous. This is something I’ve been dreaming about for most of my life and it’s finally going to happen. 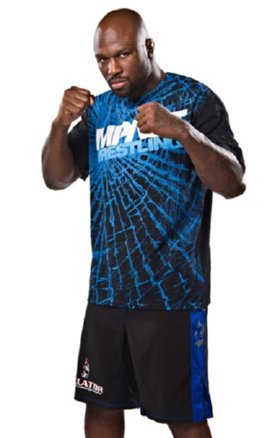 Lawal, 31, has been actively training at Ohio Valley Wrestling in recent weeks to prepare for his debut, and although he’ll start off his TNA career as a special referee, he’ll eventually get into tho squared circle as an active participant.

“Right now, as far as it comes to my first match, I’m not sure yet,” Lawal said Wednesday on a conference call. “I have a long ways to go. I’m still learning. This is not easy. People think this is easy but it’s harder as MMA. MMA is you get hit, you hit them back. This is an art, it’s entertainment, it’s tough. I’m waiting for them to tell me I’m ready.”

Training under the tutelage of Al Snow, Lawal said MMA is his craft, so he’s in no rush to jump right into the ring before he’s ready.

“I’m still a rookie, I’m a still baby within this sport and within the entertainment business,” he said. “I’m definitely in no rush to just jump out there and start wrestling and embarrass myself.”

Despite being surprised by a conversation he had with Kurt Angle where Angle told him the soreness from taking bumps oftentimes takes a while to go away, he said he’s mentally ready for the rigors of professional wrestling that he’s already started to experience in OVW.

“I treat it like it’s training camp,” Lawal said. “I’m there to learn, I’m there to improve and that’s what I do in MMA. … I’m up to the challenge.”

Lawal will still compete in MMA while being a professional wrestling, but won’t be wrestling and fighting at the same time. He’ll be around TNA until he needs to begin training for his debut with the Bellator Fighting Championships, which will come in January, also on Spike TV. There, he’ll compete in the company’s light-heavyweight tournament and when his obligations there are done, he’ll return to TNA and OVW to continue honing his craft as a professional wrestling.

Lawal, though, won’t rule out heading to Orlando a couple times while he’s in MMA camp.

“I wouldn’t mind mixing in a few appearance while in in training camp,” Lawal said. “I’m cool with that, because while I’m down there in Florida, I can go down to the Blackzilians (an MMA team) and get some more training in. I like to travel to train anyways. I’m not going to be taking any chair shots or jumping off any top ropes or doing any lumberjack matches, strap matches, cage matches, no. But I can make a few appearances.”

So what’s in store when Lawal referees the heated grudge match between Storm and Roode next week at Bound For Glory? For one, he says he’s not there to overshadow Roode or Storm, but he won’t be afraid law down the lay if need be.

“Bobby Roode tends to get out of line sometimes, so I might have to check him,” Lawal said. “You never know what’s going to happen.”