Robert Jeaudoin, who died suddenly on Sunday, September 30, was one of those pro wrestlers that successfully transitioned out of the rasslin’ business into real life, leaving his “Hangman” Bobby Jaggers persona in the past, if not his love of the Kansas Jayhawks.

In 1996, his 20-year wrestling career over, he went back to school, studying civil engineering at Kansas State University, as well as classes at Butler County Community College. He worked for the state of Kansas as an engineering tech. By 2007, he was working at the Department of Homeland Security as a road and bridge specialist. 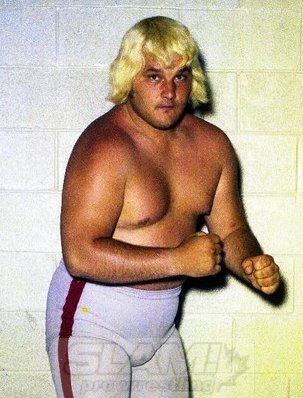 Born on January 8, 1948, in Vancouver, Washington, Jeaudoin went to Hudsons Bay High School. In December 1966, he joined the U.S. Army, and served for a year and a half in Vietnam. Jeaudoin was in the “A” Battery of the 1/30 Artillery 1st Calvary, and fought in battles in Hue, Khe Saah, A-Shau Valley, and the Tet offensive. His tattoos proudly recalled his service to his country.

Upon returning home, he had a chance meeting with Sandy Barr, who asked Jeaudoin if he had ever considered becoming a wrestler. Jeaudoin, who was a fan growing up — “Moondog” Lonnie Mayne was his favourite — jumped at the chance.

“Sandy is the one that started me in the business and more than likely saved my life as I was a messed up Vietnam vet and he got me to really put my mind and heart into wrestling,” he wrote in an email. “As it all came about I wrestled for 20 years and did ok, but we use to laugh about him saving me from the cookie factory as I was working at NABISCO at the time.”

He was trained by Tito Montez and Kurt Von Steiger in Arizona, and debuted against Al Madril. Initially, Jeaudoin worked as Bobby Mayne in tribute to his hero.

Like all wrestlers of the day, Jeaudoin hit the road — Tennessee in 1972-73, and then teaming with Charlie Fulton in a tag team managed by Sir Steve Clements. While stationed in Kansas City, he caught the eye of Dory Funk Jr., who brought him to Amarillo, which would be an off-and-on spot for years, as would K.C. 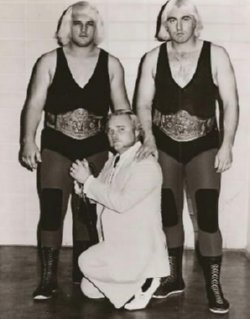 “He was a heck of a talent. He was aggressive. He was in the ballgame the whole way,” said Kansas City promoter Bob Geigel.

There was time in San Francisco in 1975 and Louisiana for “Cowboy” Bill Watts. There, he formed a championship team with Jerry Brown.

In Vancouver, B.C., he was given the chance to be the booker for promoter Al Tomko, but he clashed with co-owner Gene Kiniski and didn’t last.

Up next was Atlanta, where Jeaudoin teamed with a young Sterling Golden — who would later become Hulk Hogan — and Knoxville.

It was in Florida where “Hangman” Bobby Jaggers really was born, the one with the messy blond hair that could really talk and seemed like a younger Dusty Rhodes.

“Now was Florida, where it all came together,” Jeaudoin told the Ring Around the Northwest newsletter. “Dusty [Rhodes], Eddie Graham and the best workers in the world at that time. The only thing Dusty told me when he brought me in was I’ll give you three weeks; if you aren’t over, then look for somewhere else to go. Well, I stayed for two years on top with Dusty, in a territory where he killed other guys off in six months. We just got over and ran with it.”

Rhodes recalled his frequent opponent. “He stayed around me [in Florida]. I seen him in Kansas City, back to Florida. Then when I moved to Crockett, he came along,” said The American Dream, calling Jaggers a reliable semi-main eventer. “He was a wonderful talent. As a heel, he was just a really great bump-taker.”

Jaggers would also be in and out of Puerto Rico over his career, winning both the WWC North American and Puerto Rico titles. He also made 18 trips to Japan, as well as jaunts to South Africa.

Portland was another stop in 1984, and he would reign as the NWA Pacific Northwest champion four times, and hold the PNW tag titles with Rip Oliver and David Sierra. 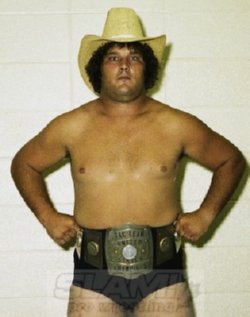 His biggest national run was in the NWA (Jim Crockett Promotions) out of Charlotte, where he was paired with “Dirty” Dutch Mantell as the Kansas Jayhawks.

After that run ended in 1988, Jeaudoin thought his time was up and began to get out of the wrestling business. The murder of Bruiser Brody (Frank Goodish) in a Puerto Rican locker room, changed everything for him. Jeaudoin was in the heel dressing room when Brody was knifed in the babyface locker room.

“When Bruiser Brody died I would say that was the start of the end,” he said. “My girls were growing up and didn’t know me. I was just tired of acting 18 at 42. I had to grow up and get a real job.”

Throughout his career, Jaggers was known as a bleeder.

“The first time I bladed it just sort of came natural to me, no sweat,” he told RATNW. “I always remember that when I broke in the business you would earn the right to blade to make money, not just do it. Through my whole career I believe I lived by that.”

Many fans also recall the infamous angle in San Antonio, which aired nationally on the USA Network at the time, where Scott Casey poured a bucket of pig slop over Jaggers. “Yes, it was real horse shit and water,” recalled Jeaudoin for RATNW. “But some of the boys pissed in the bucket too. I didn’t find out that until later.”

He and Casey had a great feud and could get the fans worked up.

“Bobby Jaggers and I were working against each other one night,” recalled Casey to historian Scott Teal, circa 2001. “The people were right on the edge of rioting. He was outside the ring and the people began to circle him. I jumped in between them and grabbed him by the hair. I yelled, ‘Get out of the way. I’m gonna run his head into the wall,’ then ran him right back to the dressing room. That saved his ass.”

After successfully transitioning out of wrestling, Jeaudoin enjoyed hobbies, including hunting and fishing, which was made easier by his rural home in Kansas.

Jeaudoin, like many a pro wrestler, had a real talent for exaggeration. 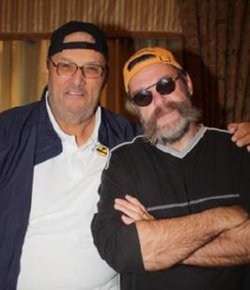 Bobby Jaggers and Dutch Mantell reunite the Kansas Jayhawks in April 2010 at a fanfest in New Jersey. Photo by Christine Coons

“He had a great gift of gab. He could embellish his story a little more than you wanted sometimes,” said Rhodes, launching into a story about how Jaggers bragged about a horse he owned in Kansas. “Me and [Dick] Murdoch went by there one time to see him. He did have a horse, but it was underfed. He was just one of those guys that could really make a story up.”

In an email to this writer, Jeaudoin swore that he would set the record straight on many things. “Let me tell you from the get go I will tell you the truth about the boys and if you don’t want to know the truth about a question don’t ask,” he wrote in an email. “The only thing I ask is you print exactly what my answers are, because that way there can be no misunderstandings between us.”

Jaggers did do a shoot interview a few years back for RF Video, where he took shots at a lot of people, and described much of his career, including what Puerto Rico was like the night Brody was killed.

Buck Robley wrestled with Jaggers a ton, and was a booker in a few territories and used his friend. Post-wrestling, they stayed in touch, and when Jeaudoin’s work would bring him to FEMA headquarters in Little Rock, Ark., they would hook up.

Robley talked to his friend just a couple of days ago.

“His health had been bad,” said Robley. “He was overweight and everything, but he told me he was losing weight and he was feeling good the last time I talked to him.”

According to his daughter, Amanda Jeaudoin-Cain, Jeaudoin died on Sunday, September 30, 2012 of renal failure, and had health issues for some time.

“My Dad is now not in any pain… pain that he had lived with for a very long time but seemed to always have a smile,” Jeaudoin-Cain wrote on her Facebook page. “He was a wonderful man and lived a phenomenal life. I didn’t get to say goodbye to you Daddy. I can’t wait till the day we meet again. I love you so much give grandma Betty a big hug she has been waiting for you for a very long time.”

“Dad had been Hep C positive since being in Vietnam,” said his daughter Liz Jeaudoin Rohloff in an email. “He had some problems this past five years with his liver going to shit because of the Hep C.”

“This past weekend dad felt sick and was taken to the hospital,” said Jeaudoin Rohloff. “At the hospital dad had a infection in his blood. Since his liver was already weak it couldn’t clean the toxins and as a result it put a strain on his kidneys and his body shut down.”

Funeral arrangements are not known at this time, though he will be buried at Dunlap Cemetery and the service will have full military honours.

“My dad was proud of his military service, his wrestling days and also proud of us as his family,” concluded Jeaudoin Rohloff. “He was a character who loved to laugh, have fun and tell a story. He told me once, “When it’s time for me too go don’t be upset. I have lived a life only some can dream about.” He was a true American hero. And a wonderful loving father and husband.”

Jeaudoin, who married his wife Donna in 1977, is survived by his daughters, Liz Jeaudoin Rohloff (Daniel Rohloff), and Amanda (Cory Cain), and two grandchildren, Asiah and Witten. He also considered his nephew, Rocky Washburn (Wendi) like a son, and claimed his two sons Tyler and Kolby Washburn as his grandsons.