Eric Pomeroy, who went by a slew of names, including The Mad Russian, Stan Vachon, Stan Pulaski, and Stan Kalmikoff, has died. He was 79. I got a chance to interview Eric on numerous occasions, and I have to say, for a man who had faced as many health issues as he had, he was always in good spirits to chat.

Much of the Eric Pomeroy story was detailed in my story on him from 2006: Eric Pomeroy: Still a happy Russian (and more). It’s a great tale, from his early days in St. John’s, Newfoundland and Labrador, to becoming a wrestler at 18, and traveling the world.

I’ll try to keep those memories, as many of our conversations revolved around hospital visits. 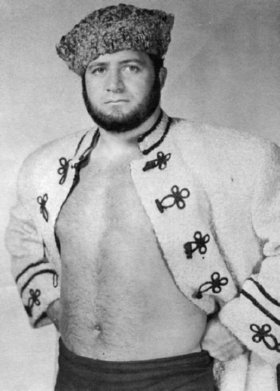 Eric Pomeroy as The Mad Russian.

Not to dwell on the negative, but his passing on September 29th at the Annie Jeffrey Memorial County Health Center in Osceola, Nebraska, means that he is not in pain. Looking through my files on him, every time we chatted, he explained some new health issue he was facing.

In October 2004, he’d just had his knees fixed. “I don’t know any guys in the business that don’t have bad knees and bad backs,” he said.

In June 2006, doctors had just fixed one of those knees after he’d wrecked it stepping wrong. He’d also broken the femur bone in his left leg. He’d also fallen using his walker and broken his hip. When an artificial hip was put in, he lost feeling in his leg down to his toes, and a blood clot formed in his butt cheek.

A couple of months later, he was telling me about his infected gallbladder, and how he was lucky to still be alive.

“I ain’t going to give up,” he said then. After course, this is a man who had a car accident in 1974 that stopped his wrestling career — but hardly ended his life. He was head of maintenance at the Osceola Good Samaritan Society in Osceola, Neb., for 30 years, and was also a valet who saddled the horses and worked with the jockeys prior to races for the Nebraska Horse Racing Commission. Pastimes included riding motorcycles and horses, and fishing and hunting with his family.

The last time we talked, in December 2007, he talked about being confined to a wheelchair. “I always say, ‘There’s someone worse off than me.’ I get by. I’ve got a good wife, good home, good mother-in-law that lives with us, and been my mother-in-law for 35 years — we get along great.”

Though I don’t have a record of it, I know I talked to his widow, Lynn, a few times and we conversed about the beatings wrestlers took over the years, all in the name of entertaining the fans. They had been married since New Year’s Eve 1978.

It’s a choice we make to remember the good times, not the bad.

Pomeroy was an excellent talent, and perhaps more importantly, an excellent, down-to-Earth Newfoundlander, who loved to talk and share stories.

As a concluding visual, I will picture Pomeroy going to visit his “brother” Maurice “Mad Dog” Vachon, who lived in Omaha, while Pomeroy was in Stromsburg, about two hours away in the flat terrain of Nebraska.

A graveside memorial services will be held Saturday, Oct. 13, 2012 at 10 a.m. at the Stromsburg Cemetery, and there will be no visitation.

Survivors include his wife, Lynn of Stromsburg; daughter, Ronda (Tim) Pomeroy of McCool Junction; granddaughters, Shanna (Adam) Preister and daughter Ellie of Kansas City, Mo. and Amber (Jeremy) Sheifield and daughter Jaylee of Council Bluffs, Iowa; sisters, Lorraine Noftal and family of St. John’s, Newfoundland and Sharon Pomeroy and children Jamie and Jordon Belisle of Ottawa, Canada; brother, Hubert (Vivian) Pomeroy Jr. and Warren and family of Clarenville, Newfoundland; mother-in-law Doris Kreis of Stromsburg, nieces, nephews and a host of other relatives and friends. He was preceded in death by his parents, Hubert and Violet; and brothers and sisters.