What do Ernie Ladd, Angelo Mosca, and The Rock all have in common? Each of these superstars got their start on the football field before transferring into the world of professional wrestling.

Add Nick Hannah to the list of gridiron bruisers who traded shoulder pads for a chance at stardom inside the ring. 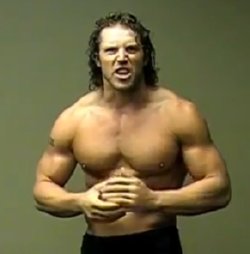 The East Wenatchee, Washington native will do just that this Saturday as he makes his official squared circle debut for the Canadian National Wrestling Alliance in Edmonton.

After playing college football for Eastern Oregon University, Hannah was signed by the National Football League’s Indianapolis Colts in 2005, but never cracked the lineup. The linebacker spent a year playing ball in Europe for the Amsterdam Admirals before returning to North America and joining the BC Lions of the Canadian Football League in 2007. A stint on the Toronto Argonauts practice squad as well as time in another U.S. league wrapped up Hannah’s days of helmets and chinstraps.

Now out of football and working as a successful personal trainer, a chance meeting with Hall of Famer, Ted “The Million Dollar Man” DiBiase , would put the 31-year-old on a totally different path. “Ted and I met through a mutual friend who runs a ministry in Phoenix, Arizona,” explained Hannah to SLAM! Wrestling. “We hit it off and talked a lot of football. After a couple of hours we discussed the business of pro wrestling and how I could be considered.”

DiBiase was en route to a Raw Legends show and asked Hannah for his football resume and some footage that he could bring along to give to WWE talent development. “Within a couple of days WWE notified me that I caught their attention and would be invited to a future workout,” said a thrilled Hannah. “I called Ted immediately and he told me I needed to ‘learn how to wrestle.’ I was given Vance Nevada of CNWA’s phone number to get started and off I went.”

The 6-foot, 225-pound hopeful was linked up with trainer Sean “Massive Damage” Dunster at CNWA’s training facility in Edmonton only six weeks ago and has been working around the clock to be ready for his time in the spotlight.

“My daily routine: weight room at 11 a.m.; 1-on-1 training with Sean and CNWA Monster Pro Champ Tyler James at 1 p.m.; pro camp at 7 p.m.; and another gym workout at 9 p.m.,” detailed Hannah. CNWA Live Events Coordinator Vern May added, “though still a novice, Hannah has his eyes on the WWE and is hopeful that his Canadian experience between the ropes will help to vault him to new heights.”

When beginning a career in something as unique as professional wrestling, Hannah was glad that the first two days of training were largely focused on terminology and safety. He compared the business to his football experience: “It’s similar to learning a new playbook. Basically it’s learning a new language and the faster I picked it up the more Sean Dunster threw at me.”

“Football and wrestling to me are both about becoming comfortable with the job you are there to do,” he continued. “Once you understand that, things slow down and I try to welcome any mistakes, fix them immediately, and strive to improve each day.”

Of course, one of the most important components to becoming a successful sports entertainer is your in-ring persona. Hannah decided to use a stage name that he has been called since high school, “NZO” (pronounced Neezo). “NZO is a babyface who is a technically sound wrestler with a rare blend of size and explosiveness,” he elaborated.

Like anyone in pro wrestling who takes a hiatus, Andy McNamara inevitably returned to SLAM! Wrestling and hopes to receive a 2011 Royal Rumble Diesel-style pop.