One of the latest releases from Kayfabe Commentaries is a rather interesting one. Vince Russo, despite only being a writer, is one of the most vilified men in professional wrestling history. After his WCW run came to an end, the company was purchased by Vince McMahon and the Invasion commenced. In this DVD, Guest Booker with Vince Russo, Russo rebooks the WCW invasion of the WWF.

Host Sean Oliver is here with one Vincent Russo to talk about what Russo would do if he booked the 2001 World Championship Wrestling invasion of the World Wrestling Federation.

After an opening few minutes talking about booking philosophy, we go into talking about the Invasion angle. Russo, drinking Yoo-Hoo chocolate milk, notes how when his hand’s not involved in things, he finds it hard to watch.

Russo says he believes Vince McMahon had a rather large hand in booking the angle and believes the angle could’ve worked with both Vince and Shane McMahon running the opposing factions. 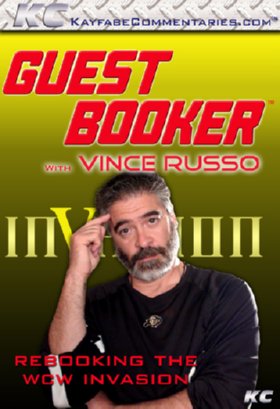 Oliver and Russo talk about how a lot of the bigger stars, Ric Flair, Sting, Kevin Nash, Goldberg, etc., were left out of the thing, mostly due to their inflated salaries. Russo says he totally understands why McMahon made that decision, but said cherry picking a few of those guys would’ve made it stronger.

Russo is flabbergasted by the fact that it took two months to get the WCW talent on WWF television. They talk about how “Diamond” Dallas Page was focused on and how Russo feels DDP was never about the money and that’s why he signed with WWF, even doing the infamous stalker angle.

When talking about the roster, Russo says the three key players you need are Scott Hall, Kevin Nash and Hulk Hogan, regardless of the cost and the headaches those three bring. He’d go as far to say that if you don’t have those three, don’t do the story. He also says he’d want to start with Booker T, Goldberg, Ric Flair and Sting as critical elements of the angle.

Russo says the angle should’ve been based on reality and the WCW titles should’ve had nothing to do with it because they make it seem fake. He says the angle sucked because it turned into a wrestling angle instead of something that was real.

In rebooking the Invasion, Russo suggests WWE starts with Hall coming back, saying he made a mistake and wants his job back. He suggests the other two original members of the nWo, Nash and Hogan, come back and have Vince McMahon cut epic promos on them, leading to the entire process taking off.

That’s the big key throughout the entire rebooking of the Invasion from Russo. It needed to start with the nWo. Russo lays out a plan that involves no one other than the nWo coming in through SummerSlam.

When Oliver asks when they’re going to bring in more people, Russo tells him to stay patient. He turns the sheets over with the names on them, giving his catchphrase, which is says will be on his tombstone, “We have 52 weeks.”

From there, Russo weaves his way through the story, going through how he’d bring in former WCW executives and wrestlers and how he’d work them into the story.

“What we worry about is logic first,” Russo says. The story he presents is interesting (and vastly different than what WWE did) and worth taking a listen to with this DVD release.

The Invasion was an area of pro wrestling history that many agree was botched by WWE. The best thing about this DVD is that you can easily see all the things Russo proposes in your head. It’s presented very well.

Russo says the two things he did in this were to stay true to logic and everybody’s character. He opines that what’s wrong right now is the layers and layers of creative teams have turned something simple into something difficult.

And that’s what Russo’s plan for the Invasion is. It’s simple, logical and, with hindsight being 20/20, makes me wish that Russo was the man in charge of booking the Invasion.