Like many things in pro wrestling these days, finishing moves aren’t what they used to be. When Hulk Hogan came down with that Leg Drop, when Jake “The Snake” Roberts locked in the DDT, when Ric Flair put on the Figure Four, it was game over. A finishing move used to be exactly that: a finish or an ending to a match.

Now, Randy Orton can hit the RKO two or three times and still not put his opponent away. Just because John Cena hits the Attitude Adjustment, doesn’t mean he will win the match. Worst of all though, any other wrestler can use the RKO or Attitude Adjustment and deliver it with the same power as Orton and Cena. How bizarre. 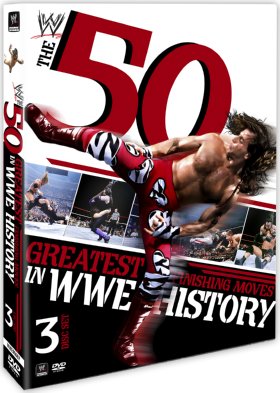 Something about that just doesn’t sit right with me. A finishing move used to be a wrestler’s trademark. Sure, many superstars could execute a hangman’s neckbreaker but only Rick Rude could perform the Rude Awakening. Anyone can do a reverse piledriver but there is only one Tombstone Piledriver. It used to be that you could steal a foe’s finishing move but you could never execute it with the same authority as they did. That was because they supposedly practised it over and over so it was their claim to fame. Nowadays, even Shane McMahon can knock someone out with a Stone Cold Stunner just like Austin.

The WWE has attempted to do so with their The 50 Greatest Finishing Moves in WWE History DVD set. Although it is not complete by any stretch of the imagination, the set does do a great job of listing the most famous finishers of them all. Where it does fall short is in the ranking of them.

With Jim Ross doing what he does best, providing legitimacy and an air of studious authenticity to any discussion about pro wrestling and other such stars as Steven Regal, Kofi Kingston, Mick Foley, Dusty Rhodes, Jerry Lawler, and Daniel Bryan contributing amusing colour and personal stories, the set is thought-provoking and at the same time entertaining. When Steven Regal regrets not wrestling Bret Hart and facing the challenge of the Sharpshooter, when the Dudley Boys discuss how and why they created the 3-D finisher, when Mick Foley postulates on the evolution of the Mandible Claw into Mr. Socko, it adds another layer to the various stories surrounding the moves and their origins.

Fans, especially those who grew up in the 1960s, ’70s or ’80s, are sure to notice the gaps — Paul Orndorff’s Piledriver, Demolition’s Decapitation, Ultimate Warrior’s Gorilla Press Slam, Roddy Piper’s Sleeper or Eye Jab, Greg Valentine’s Hammer Drop, Ricky Steamboat’s Diving Crossbody, the British Bulldog’s PowerSlam or even the Stratusfaction of Trish Stratus are nowhere to be found on the list. If there are any duplications such as Orndorff and Undertaker both using piledrivers, the more recent or active star usually wins out it seems.

Case in point, it should come as no surprise that Triple H’s Pedigree is the third best finisher on the list.

While the list itself and discussions around them on the DVD are interesting, the presentation is not. Each move is introduced with a cheesy lotto ball scene like something out of the Royal Rumble and after viewing the repetitive footage over and over again, you will be wishing for a reshowing of the legendary Blindfold Match between Rick Martel and Jack Roberts.

Yes, the animated sequence is THAT bad.

The strangest thing about the set is that it is three discs long but the countdown only takes up one. The other two disks feature a mishmash of disconnected and unrelated bouts such as Mr. Perfect versus The Texas Tornado, Kevin Nash and Scott Hall against The Giant and Lex Luger or Mankind versus Jerry Lawler. About the only match that does fit the set’s theme is the DDT versus Rude Awakening Match.

If you can ignore the monotonous lotto ball scenes and don’t put too much stock in the rankings, the list is at least a pretty comprehensive look at the innovative moves and gifted superstars who have each put their unique stamp on the wrestling industry we know and love today.