One must forgive Eric Pomeroy if he doesn’t know who he is today. His given name is what Eastern Canada knows him as; in Georgia, he had a hot run as Stan Vachon, “brother” to the Mad Dog and the Butcher; he was Stan Kalmikoff for a time; and in Nebraska, where he lives today, he’s known everywhere as Stan Pulaski, the Happy or Mad Russian, depending on his mood.

His mood lately has been dictated by a mind-boggling myriad of ailments, from an infected gallbladder to a broken femur bone, to a doctor’s misdiagnosis that resulted in a cut nerve in his hip, meaning that he can’t walk at the moment. 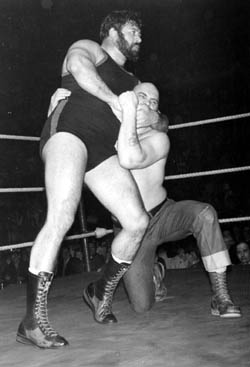 “I ain’t going to give up,” Pomeroy said recently, in between trips to physical therapy. “I just have to keep punching away. I’ve been in five different hospitals in the past year and a half, between the legs and the gallbladder.”

If one were that sort, it would be feasible to surmise that Pomeroy is hexed. His wrestling career, after all, was cut short in a car wreck in 1973 in Atlanta.

“I was going to the matches in Georgia. I was with Kerry Miller,” Pomeroy recalled of that fateful night. “I had a brand new car, but it was giving me a little trouble that day. I took it over to a place to get it fixed, see what the problem was. Kerry Miller was going down to the matches. I got a ride with him. We wreck. A tractor-trailer ran over his little car, and wiped us out. He got banged up pretty bad. I got banged up worse. That really cost me my career.”

Though he yearned to be involved in wrestling, it wasn’t to be. He was damaged goods, and was in an Omaha, Nebraska hospital for quite a while, traveling by wheelchair until he learned to walk again.

“One of the doctors told me, ‘Things have knit together in your back that we have no explanation for. If you get back in the ring, you could be paralyzed for the rest of your life and be in a wheelchair. My advice to you is to take those wrestling boots and never put them on,'” recollected Pomeroy. “I thought about that quite a bit. I didn’t want to do that, of course. … I just had to hang it up. It took me a couple of years to digest that. My wife washed up all my stuff and it’s been in a trunk upstairs and I’ve never seen it from that day to this-my boots and tights and jackets.”

Born June 12, 1933 in St. John’s, Newfoundland, with 12 brothers and sisters, Pomeroy wrestled amateur a bit, boxed and lifted weights on The Rock. There was next to no professional wrestling in Canada’s eastern-most province, so he went to live with a friend in Toronto and landed a job at the National Rubber tire company.

Eventually, he met Toronto heroes like Whipper Billy Watson and Pat Flanagan, and managed to talk his way into a tryout. His first few matches were as Lord Eric Pomeroy. Then Toronto promoter Frank Tunney told him, nicely, to get lost. “You’re a natural. You’re going to make some money someday in this business. But, you know, you can’t stay around Toronto forever,” Pomeroy remembered Tunney saying. True to his word, Tunney got him booked in Buffalo, and Pomeroy never looked back.

Pomeroy told a story about working in Buffalo when he was just starting out. “I had a match there and I was doing everything that I could do to try to be as good as I could.” When he returned to the dressing room, Hans Schmidt confronted him.

“What the hell do you think you’re doing out there?”

“What’s the matter with you?”

“What the hell are you supposed to do in the main event? You’ve done everything that’s normally possible out there.”

“I looked at him and said, ‘Schmidt, you might be a big, tough son of a bitch, but I’ll tell you, if you can’t follow me, you don’t belong in the main event.’ He was ready to snap my head off. I was just a kid then.”

Throughout his career, he worked under many different names. “Whoever they wanted me to be, I was,” Pomeroy said matter-of-factly.

The key personas are easy:

Eric Pomeroy: In the Maritimes, Pomeroy was a regular every summer, working against the various Cormier brothers, and teaming with Freddie Sweetan, who was from Nova Scotia but whom Pomeroy first met in Kansas City. “[Sweetan was] like a brother to me,” Pomeroy said. “We were very successful as a tag team up there. [He was a] super guy. You couldn’t ask for a nicer person, that’s the gospel truth. He was a hard worker, good performer in the ring, really a nice person. I couldn’t say anything bad or detrimental towards him. He was down-to-earth. His word was his bond.” 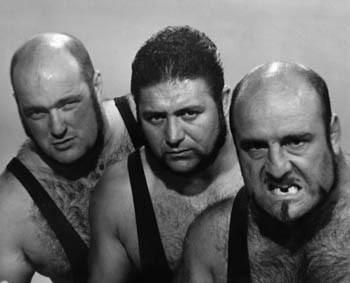 Stan Vachon: Pomeroy knew Mad Dog Vachon from his years on the road, but didn’t know Paul “Butcher” Vachon at all, since most of Butcher’s career had been overseas. Stan and Paul met in California, where Stan was working as The Mad Russian and Vachon was passing through on his way back from Japan on to Atlanta, where he’d been a hot hand for a few years. The Atlanta booker, Leo Garibaldi, had suggested to Butcher that a partner might allow for more booking choices. “I remembered what Leo had told me, so I called up The Dog. I said, ‘I’ve got this Canadian here. I’d like to bring him in to Atlanta as my brother,'” recalled Butcher Vachon. “He said, ‘Do what you want. It’s none of my business. I can’t go myself.’ Stan’s a good guy, so we made him one of my brothers.” The Vachons would have epic battles with the Torres brothers, and on occasion, Mad Dog was brought in to protect the family from the heroic Ramon, Alberto and Enrique Torres.

Stan Kalmikoff: Ivan and Karol Kalmikoff were one of the top teams of the 1950s, but by 1963, Ivan had settled into a part-time job in the Detroit zoo as a landscaper. Karol hired Pomeroy as his new “brother”, whom he billed alternately as Stan Kalmikoff and Igor Kalmikoff. “Karol kind of took me under his wing. He was older than I was. He started calling me his son. We got along pretty good together. I went down to Oklahoma when they broke up, and him and I became partners,” said Pomeroy, who was there when Karol (Karl Piwoworczyk) suffered a fatal heart attack on September 12, 1964 in Salt Lake City.

Wrestling Revue from March 1970 talked about Pomeroy’s finisher. “Pulaski’s ‘Gung Fu’ hold is considered one of the most deadly holds in pro wrestling. The Russian wears his opponent down with body slams and then kneels down behind his opponent. While the groggy victim doesn’t quite know what is going on, Stan wraps one leg around his opponent and begins to push and drive both of his fists (knuckles) into the man’s temples. No one has ever gotten out of the hold once the Russian puts on the pressure. The man’s arms become limp and the poor unfortunate soon falls into slumberland.”

Pomeroy explained his turn in Omaha. “A lot of people think it’s the wrestler themselves that make them good or bad; it’s the public that makes them good or bad. The public either boos you or cheers for you. I never changed my style, and I was here for years. They wanted to kill me. They wanted to burn [promoter] Joe Dusek’s house and everything.”

Dusek tried to talk some sense into Pomeroy.

“You’ve got to quit doing what you’re doing in the ring.”

“What the hell am I doing wrong?”

“They hate you, they want to kill you.”

“They called my house, they’re going to burn my house down one night at 12 o’clock.”

“Joe, don’t be crazy. They’re not going to burn your house down.”

A decision was reached to bring in someone that the fans would hate more than The Mad Russian; Stan suggested Mad Dog Vachon. “They brought him down, and sure enough, for a few minutes, they hated me when I went out, and they booed me. Mad Dog came out and they cheered him, and automatically he became the good guy. There was nothing planned, it was just one of those things. We had a super match, and at the end of the match, he kicked me in the groin and down I went. Then they started booing him, and they booed him after that.”

When Pomeroy returned from a trip to Japan, he was a babyface. It was fun being bad, he said. “I used to enjoy working as a villain. I could do all those fancy moves, dropkicks, head scissors, all that good stuff. But that wasn’t my thing for some reason. I liked doing it once in a while as a surprise type of thing.”

Toying with the crowd was another thing that Pomeroy enjoyed. “I could make them scream and holler at me for 10 minutes, then the next 15 minutes, make them the other way,” he said, talking about his ability to “put ’em up, sit ’em down.”

He is quick to defend the business, however. “A lot of people thought that wrestlers got together to plan matches, and workout together before matches. I’ll tell you the God’s truth-that might have happened in some other world, but I’ve never been involved in that,” he said. “A lot of people think that’s the way it is, but it’s not. Half the time, I wrestled guys that I never knew their names or ever seen them in my life, just knew them as a name. You go here and you go there, and you hear of all these guys. The next thing you know you’re in a territory with them, you’re booked with him.”

After recovering from his car accident, Pomeroy began to wonder about what to do with his life. He’d always been pretty handy, fixing things around the house. The Good Samaritan Home in Osceola, Nebraska, was looking for a repairman, and Pomeroy did that for 20 years.

He is not one to dwell on his current health issues, and credits his wife, Lynn, for love and support through the hard times.

Pomeroy’s mind does drift back to his other love on occasion.

“I just loved the business, I really did. When I got hurt and I had to quit, I’m telling you, for a long time, it just tore me up,” he admitted. “I’ve never regretted putting on my boots and going in the ring.

“I’ve done things, seen things that I would never have done in my life if it hadn’t have been for wrestling. I enjoyed my business. I’ve been to Japan several times, Australia. I’ve been across the United States countless times and Canada. Where the hell could a guy go to do that? I couldn’t have done that. For that, I thank the business. I did a lot of things, met a lot of people, seen a lot of things that I would never have seen.”