As a seven-year old, Muhammed Lawal got down on his knees and prayed for Sting to beat Ric Flair for the NWA World Heavyweight Championship at the first Clash of the Champions.

“I really didn’t pray (much), but I decided to pray to God,” Lawal said. “I was like, ‘Please God, if you love me, please let Sting win this match!’ So I was watching the match and it ended up being a time-limit draw, so I was pretty crushed when Sting didn’t win the belt, and I still think about that because I was praying for my boy Sting to win and it didn’t come true.”

Lawal, 31, is a mixed martial arts fighter by trade and life-long professional wrestling fan who will get the unique opportunity to not only compete in the cage, but inside the squared circle as well.

Thursday, Spike TV, along with TNA and the Bellator Fighting Championships, announced during a conference call they’d signed Lawal, known almost universally as “King Mo,” to a long-term deal to compete with both organizations. He’s expected to make his TNA debut this summer after starting out in Ohio Valley Wrestling once he’s finished rehabbing a serious knee injury. 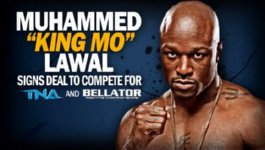 For TNA president Dixie Carter, signing someone like Lawal was something she had on her radar for a long time. She said the whole process of signing Lawal was fun.

“I don’t know, quite honestly, if there’s another athlete out there (that could do this),” Carter said. “And if there is, there’s only a handful that could even potentially pull this off. He’s a rare case.”

Lawal, an All-America wrestler at Oklahoma State who nearly made the 2008 U.S. Olympic team, was courted by WWE coming out of college by Jim Ross and Jerry Brisco, but ultimately decided to make the move to MMA, where he’s amassed an 8-1 record. But during that courting period, he spent time at Ohio Valley Wrestling, something he said he hasn’t forgotten.

“I’m not that experienced just yet,” Lawal admitted. “I’ve studied it, watched it, had a WWE tryout where I went to OVW for a week. I had the chance to work with Tom Prichard, and I learned a lot from there. I still remember a lot from there. I watched guys like Scotty 2 Hotty, Mark Henry and John Morrison out there. I picked up things to do and I also watched guys who were terrible like Nathan Jones. Not to bash him, but he’s awful. He was hurting people in there. I know what to do and what not to do to a certain extent and I’m open to learning.”

Lawal’s manager Mike Kogan told SLAM! Wrestling that Lawal, who will have separate contracts with TNA and Bellator, was “instantly captivated and interested” when approached with the idea of doing both MMA and pro wrestling at the same time by Bellator CEO Bjorn Rebney.

“When we spoke to Bjorn, that man can really sell ice to an Eskimo, and I don’t mean that in a negative way,” Kogan said. “His vision was very clear, it sounded like he knew exactly what he was looking for, there were burdens on us to deliver, just like there are burdens on them to capitalize on it and setup the right road. This is not a one-sided thing. We have to perform. We go out there and look like s—, this thing doesn’t work. The vision was awesome. It looked good, it looked solid and he put together a team of people, like Dixie Carter, Kevin Kay, we talked to Hulk Hogan and Sting. Very important, influential people were brought together in the talks. That told me these people were serious. They’re not trying to finesse a fighter into signing. They were very up-front that this was part of a larger marketing scheme and everybody has to deliver.”

That larger marketing scheme includes Spike TV marketing the King Mo brand and Kay, the president of Spike TV, said the network is going to be putting some serious resources behind that.

“Our job at Spike is to market,” Kay said. “Our job is to build it. It’s not to make fights or tell Dixie who should do what, when. What we do is market and I think we’re really good at it. When you look at the opportunity King Mo presents to be marketed, because he’s a marketing machine, we’re going to have a lot of fun doing this. We’re going to make him big in both organizations and that’s where we’ll spend the next money, marketing King Mo.”

What makes this deal so interesting is how quickly it got done. Lawal was released from his Strikeforce contract March 27 and Bellator immediately showed interested. From there, the deal was finalized in about six weeks despite a ton of moving parts between all parties involved.

“There was an ease to getting this done that, having worked in this business for 25 years, I’ve never seen,” Rebney said. “There’s a continuity that exists between the people that exist under this umbrella and specifically with these two preeminent sports franchises at Spike. It wasn’t nearly as tough as you’d think. It was like working with family and/or friends to get something done.”

In fact, this deal was kept under wraps so well that no information about it leaked out until Wednesday night. That’s something Carter was aiming for, as she said she kept the signing a secret from “almost everybody” in TNA. Now their creative team will go to work, but Lawal and Carter have already been discussing ideas.

“From Mo and I talking, we’ve come up with quite a few ideas,” she said. “The guy’s already named his finishing move. He’s got these concepts and he’s really a student of our sport. I think he’s going to make the transition very, very quickly. I know back at our headquarters and with our wrestlers all over, there’s a lot of excited people, and I’m confident our fans will be too. From the very first time he steps out on that stage, he’s going to own it and they’re going to feel that charisma hit them like a big right hand.”

In an interesting twist, Carter said TNA will follow Lawal even when he’s training for a fight in Bellator, breaking down the walls to some extent between Lawal the fighter and Lawal the pro wrestler.

“When he’s prepping for a fight, a lot of that will be covered within the show,” she said. “It’s not like he’s going to live two distinct worlds. We have every intention of blending those two together.”

So now it comes down to how to introduce Lawal to the TNA audience. Carter said Lawal won’t be introduced until he nears his debut.

“I don’t think we want to do it too early,” Carter said. “I think the timing is really important to handle this the right way, so once we get a better handle on his rehab and when he can come back, we’ll definitely hear from him and see him several weeks before he actually steps into the ring for the first time in front of everybody.”

When Carter says Lawal is a student of the game, she’s not joking. As someone who’s talked glowingly about the Four Horsemen in radio appearances, not to mention random acts like Harlem Heat and Alex Wright, this is a dream come true for Lawal.

In a 2009 interview on Lights Out Radio, Lawal talked about Arn Anderson with much regard, noting he liked Anderson’s DDT better than the Double A spinebuster.

“He used to come out of nowhere, squat down, wait until you turned around and pow!,” Lawal said. “It was real explosive, too. He has skills!”

Lawal’s passion for professional wrestling shines through when he talks about it. But what’s one of the things that has him most excited about joining TNA? The chance to meet and work with the former 16-time World Heavyweight Champion. That’s right, the Nature Boy himself.

“I love Ric Flair,” Lawal said. “He has style, swag, everything. When I was young, he talked about Space Mountain and I never knew what it was until I got older. I like Ric Flair, I like Sting. I like ’em all.”