While no one in my family are wrestling fans except me (perhaps to their credit), my Mom didn’t like seeing her youngest child watching TV alone. She would join me in watching this very unique form of entertainment. Watching TV wasn’t easy for her, due to her having lost much of her hearing, and also because English was a second language for her. Closed-captioning would help a little, but even then, if the shows were too dialogue-driven, then she could not enjoy it, unless we paused it to explain the nuances of all the conversation. But pro wrestling! Pro wrestling is something she could watch without pausing anything. She could watch it independently of any of us.

Of all the time eras for her to start watching wrestling, my Mom joined my viewing of it during the WWE’s 1990s Attitude Era, a time when the WWE pushed the boundaries of its content in terms of violence, sexuality and language unlike any other era before or since. How funny, now that I think of it. My Mom, raised in a conservative Hindu household in India, who never swore… having great laughs at the antics of D-X’s “crotch chops”; the lurid storylines of Val Venis versus Yamaguchi-San; “Sexual Chocolate” Mark Henry and Mae Young; and many other storylines that today might be considered to be “forgettable” by respected wrestling historians.

Mom also learned something new from “Stone Cold” Steve Austin: flipping the bird. Oh, she never gave it to anyone, but she finally found out what the middle finger meant. Austin proved to be my undoing when driving her around the snowy streets of Toronto: she would constantly scold me whenever I gave the finger to snowplows that happened to block my lane in the winter (hey, I was still a young driver back then, and not knowing as I do today how the snowplow drivers make all of our lives easier; my Mom was right, as always, and I was wrong).

She could understand the wrestling interviews and storyline segments, since the Attitude Era had unique characters: every wrestler looked or acted differently from one another. More importantly, wrestling, in and of itself, deals with a lot of pantomime. The facial expressions of the wrestlers helped her understand. She was an expert at reading body language and facial expressions, since she could not rely on her hearing. Her eldest grandson, Rahul, the only grandchild of hers into pro wrestling, remembered watching TNA Wrestling with her almost every week while he was attending Carleton University in Ottawa: “Her wrestling knowledge was remarkable. I recall her predicting storylines better than I could!” She continued watching WWE wrestling beyond the Attitude Era, until about early 2005, when I stopped watching WWE (with the exception of the One Night Stand pay-per-views, and one year of the revived WWE-ECW).

I only began watching wrestling on a weekly basis again when TNA debuted on Spike, in 2005. And of course, my Mom joined me.

Whenever I would visit my parents’ home in Ottawa between 2005-11, we watched TNA/Impact! Wrestling. It was a fun experience watching wrestling with her. She would “work me” during the shows, acting all upset when a heel did something heinous, threatening to walk out of the room. But of course, she stayed for the entire show. At a time when kayfabe is dead, it was fun having my Mom act as if it was still around. 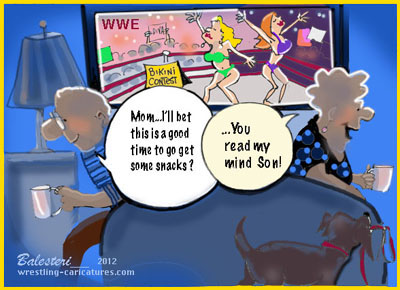 Being from India, my Mom could never pronounce most of the names from the WWE or TNA. McMahon became “McMohan” (Mohan being a common Hindu name).The Undertaker was, to her, The “Caretaker” (she had no idea what an Undertaker is). Yes, the dreaded Caretaker! (Maybe janitors are devilish in India?). Abyss became “Abby” (not a very frightening name for a monster, either). Dixie Carter was simply “Carter” to her (she asked if she was related to former U.S. President Jimmy Carter — she said they both had the same friendly smile, and that said “Carter seems to be a very nice lady”). D’Lo Brown is a name she could never pronounce, but she would do his “head roll” thing, and laugh. She preferred the funnier storylines in wrestling over the more serious ones: one of her favorites was the A.J. Styles character when he played the doofus who was chasing after Karen Angle. But when AJ became serious, she lost interest in his character. My Mom was very particular as to what she liked in wrestling, and would have been at odds with all the wrestling experts.

She respected the TNA Knockouts, those beautiful bombshells who could wrestle too. She was put off by the Beautiful People entrance, what, with all the bouncing and suggestive booty shaking — hey, what Mom wouldn’t be!? But as she watched IMPACT! for a good six years, she had her favorite knockouts: Gail Kim was at the top of my Mom’s list. She also liked Sarita a great deal: she would say, “She wrestles better than the men!” She thought Sarita was Indian, since she saw her doing yoga in a few segments of IMPACT!, and her name is similar to Indian names.

Wrestling made mother and son bond. I can’t cook and of course I wouldn’t knit! Watching wrestling is the one hobby we shared. Wrestling became our signifier and signified. Once, when I was visiting home for the summer holidays, I couldn’t find my (then in style) camouflage pants. I asked her if she had seen them. She had no idea what “camouflage” meant. Then I said “green pants.” Still, no comprehension on her part. Then it hit me: “My DUDLEY pants.” She then said, “Oh! Why didn’t you say your Dudley pants?” It can’t be often that a violent, mixed-race tag team that dressed in camouflage cargo pants saved the day.

We began to realize that wrestling was our inside secret language. During a short period when my Mom was having issues with her back, the physiotherapist told her to walk in a certain posture. She couldn’t understand. Someone told my Mom to “walk like a supermodel,” but once again, my Mom never watched supermodel shows. We had a difficult time helping her to understand how to walk while healing her posture. Then it hit me: “Mom, walk like Paul!” Once again, she understood immediately (hopefully SLAM! Wrestling readers will understand that means walking like Paul Heyman, with his New York swagger). She laughed since she never liked when I used to “walk like Paul,” though she did like me when I spoke about Paul E., who I befriended during my WWE writing days. She realized the irony that “walking like Paul” would be beneficial to her. In those moments, she became Mom E. Dangerously for me. 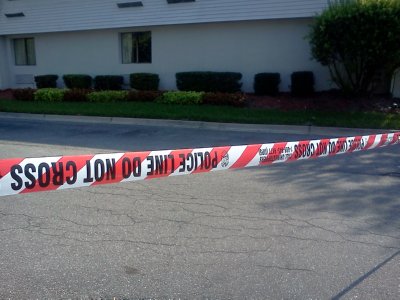 You know you are staying in a place that would make Mom uncomfortable when there is a police line — upside down! — outside.

When she passed away in August, I stopped watching wrestling. Starting a new job, I moved into a roach motel. To me, it seemed disrespectful to be in a world of comfort. I couldn’t associate myself with anything that reminded me of her: Indian food and wrestling. One weekend in late September, I had finished my lecture prep and had nothing to do, since it was raining hard outside. With some trepidation, I went to the Spike TV website, and onto its IMPACT! Wrestling page. I was afraid to click on one of the show links, for the memories it would bring back of my Mom. It would have been my first wrestling show that I could not email my Mom about, or watch with her. Wrestling would now be a solitary activity for me.

Then a small miracle happened while watching that episode of IMPACT!: I came to realize that my Mom’s voice would not be forever gone, but even more present. “Mom would have loved this part,” I thought during some segments. As I continued to watch it over the next few months, I know she would have shook her head and said, “Very bad” in the storyline when Robert Roode turned on “Cowboy” James Storm. In those moments, over the next few weeks, I realized that to remember my Mom, I should do whatever we liked to do together; I should watch what she liked to watch; I should eat what she used to cook for me (vegetarian Indian food); and that I should get out of that real and metaphorical roach motel that I had locked myself in.

“You gave to me all I know
I will stay here, I will not go….”
— Shuffle, by Bombay Bicycle Club

EDITOR’S NOTE: Ranjan is remembering his late Mom’s enjoyment of pro wrestling by attending TNA’s Sacrifice PPV tonight in Orlando. This is his second article on Moms for SLAM! Wrestling, the first being his interview with Paul Heyman, dedicated to the ECW genius’s late Mom.