TORONTO — Ring of Honor’s Border Wars iPPV may have had its issues with the streaming from the website, but live, it was quite the spectacle, seeing the ROH World title and the tag belts switch hands during a hot, hot card.

The show Saturday at the Ted Reeve Arena in the city’s east end was a nearly fully event, with attendance a little hard to judge since so many people chose to stand rather than sit in the general admission seating. Regardless of where they were, though, the fans were heard — particularly “Section C” which bonded as a unit on the floor when the section’s sign was used as a weapon.

Understandably, it was the main event that left a memorable image in everyone’s mind, with a very pro-Kevin Steen crowd turning Davey Richards into a seething heel at times. 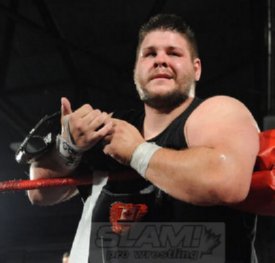 Richards fought with everything he had in a match that had several different twists and turns. Richards executed an exploder suplex to the big man on the edge of the ring apron, which seems physically impossible. Steen fought back in typical Kevin Steen fashion by not only spitting in Richards’ face, but also slapping Richards’ mouth guard free. Steen then wanted to sample a taste of what it’s like to be champion, and actually put Richards’ used mouth guard in Steen’s own mouth, eliciting gasps from the audience.

After several failed piledriver attempts by Steen, Richards delivered a double-underhook piledriver of his own, only for Steen to kick out at two. The action spilled to the floor, where Steen drove Richards into the ring apron with a couple of powerbombs. Back in the ring, Richards secured the Ankle Lock, only to have Steen counter into the Sharpshooter, which was very well received by the Toronto crowd. Richards re-countered into the Ankle Lock, only for Steen to escape, knock Richards into an exposed second turnbuckle and finally deliver his double-underhook cradle piledriver to become the new ROH World Champion. Jimmy Jacobs at ringside proved to be a non-factor.

ROH president Cary Silkin refused to personally hand the title to Steen, so referee Todd Sinclair had to do it instead. Nevertheless, it got very emotional at the end, when Steve Corino came to the ring and got face to face with Steen, only to embrace him with a hug.

“This is like watching my little brother succeed,” Corino said after the show in the parking lot, watching Steen mingle with fans, the title on his shoulder.

The other big title match was titled a “Fight without Honor” for the tag team belts, and pitted Wrestling’s Greatest Tag Team, Charlie Haas and Shelton Benjamin, against the champions, Jay and Mark Briscoe.

The WGTT actually got outsmarted in the early going. Jay Briscoe distracted WGTT, allowing his brother Mark to sneak up from behind, wearing a customized hockey jersey and helmet and attacked with a hockey stick that the Maple Leafs currently have no use for. Benjamin snapmared Mark Briscoe off the top rope to the arena floor, which received some chants that aren’t going to be repeated on a family website. And in an attempt to top his previous act, Benjamin leapt from the canvas to the top turnbuckle, with a hiptoss to Jay Briscoe. Not to be outdone, the Briscoes set up a table on the outside, and with Benjamin placed across it, Mark two-stepped his way across the middle rope, but ended up taking too much time, as Haas pulled him back into the ring with an Angle slam. Benjamin then tried to German suplex Jay Briscoe off the ring apron through the outside table, which thankfully didn’t work out. But he did end up putting Briscoe through the table eventually, with a much safer move. Despite Haas being opened up in this one, WGTT claimed ROH tag team gold for the second time, as Haas used a cloth filled with some sort of chemical substance, to put Mark Briscoe directly to sleep. 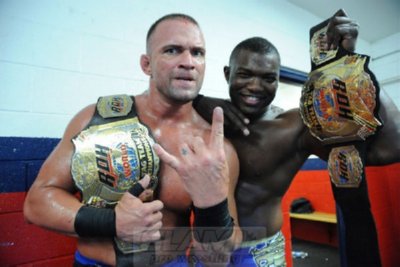 The other main story that came out of the iPPV had to do with the online technical issues. SLAM! Wrestling’s own Matt Bishop was one of the ones who could not log onto the ROHwrestling.com website to watch the show he had paid to review for the site.

ROH was quickly aware of the problem, and posted this message online:

Again we are extremely frustrated by the ippv result tonight and offer our deepest apologies. Since Showdown in the Sun, we have been working endlessly to provide an optimal ppv experience which we believe we have achieved.. For our website, we increased our server memory x3 and doubled its processing power. Still, it seems that our architecture could not handle the excessive user logins and we are left with a great stream that our fans can not see. If a refund is demanded, it WILL be given. Otherwise we would like to offer full retention of the replay for Border Wars as well as FREE access to the Best in the World PPV on June 24th for anyone who ordered Border Wars tonight. This will also include retention of the Best in the World PPV in your myPPV accounts. We WILL get this right no matter what it takes in time for Best in the World.

In the arena, nothing was announced, but it is unusual for an intermission during a pay-per-view taping, let alone a second countdown for the crowd with announcers Kevin Kelly and Nigel McGuinness in the ring to start things off.

Prior to the iPPV, there was an opening dark match, involving ROH veterans Grizzly Redwood and Delirious. This really got the crowd excited, as the streamers immediately started to fly.

“The Manbeast” Rhino, who returned to the promotion recently, took on former ROH World champion “Die Hard” Eddie Edwards in the opening iPPV match. Edwards utilized one of the most unique counters to the gore, which was a low dropkick to Rhino’s horn. A miscommunication between Rhino and manager Truth Martini allowed Edwards to pick up the duke off a schoolboy. Rhino also had a word with Martini afterwards. Unfortunately for Truth, the word was “moron!” But being the slick manager that he is, Martini was able to talk Rhino down, paid off with a wad off cash, and lives to see another day.

“Managers should know that they should be supporting actors,” Martini said recently. “You have to know when to get the crowd to react. You can’t do it when something important is happening in the match, because you don’t want to take the heat away from the wrestler.”

The six-man tag nearly blew the roof off the place, with the Young Bucks and Mike Mondo versus The All Night Xpress and TJ Perkins, so three former TNA stars, one former WWE star and one former WWE trainee, with Rhett Titus being the odd man out. Kenny King really picked up the pace off the hot tag and regained the advantage for his team. Matt Jackson was the recipient of an electric chair/blockbuster combination by the All Night Express, followed by a 450 splash from TJ Perkins, which secured the victory for the team of Perkins and the ANX.

“I think ROH has the best tag team division in wrestling right now,” King said. “The teams in ROH aren’t just teams. We practice, live and travel together as well.”

Jay Lethal chalked a one in the loss column of “The Dominant Male” Tomasso Ciampa’s otherwise unblemished record, as Lethal executed a series of backbreakers, finally ending the sequence with the Lethal Combination. Not even Ciampa’s new bleached blond beard could save him in that one.

Toronto’s Jimmy Korderas received one of the loudest pops of the night, as he refereed the bout between “Canadian Icon” Lance Storm and “The Prodigy” Mike Bennett. After the show, he downplayed the moment, placing the spotlight on the wrestlers, but Korderas did admit to tearing up in the ring.

Storm received quite an ovation in his own right, and may have added to it, coming out to Fozzy’s “Enemy.” It almost became a West Side Story in Eastern Canada, as fans started wondering, ‘How do you solve a problem like Maria?’ though Bennett’s girlfriend Maria Kanellis was conspicuous by her absence. Brutal Bob Evans was in Bennett’s corner, however.

“Maria has worked with some of the best in the wrestling business,” Bennett said earlier this week. “She was asked to come in for Final Battle, and afterwards we kind of sat down and thought we should keep this thing going.”

The action and this one went back and forth. Storm kicked out of Bennett’s signature Box Office Smash, and Bennett’s manager Brutal Bob Evans guided him to the safety of the bottom rope, resulting in Storm having to release his Maple Leaf half crab. The end came when Storm took a steel chair and offered Bennett a seat, but when Bennett declined, Storm created a smash of his own across The Prodigy’s back, which led to the superkick and the victory for the Canadian Icon. Look for a rubber match for these two, as Bennett will likely cry foul over the hometown refereeing.

Another Toronto boy was Michael Elgin, fresh off his Match of the Year candidate from Showdown in the Sun against Davey Richards. Elgin surprisingly adhered to the Code of Honor in his match with Adam Cole, only to put Cole away with a corner powerbomb, followed by a tornado bomb. Elgin did some incredible power moves, including one time where, seated on the second turnbuckle, he lifted Cole from the ring apron up into a superplex. Cole did get somewhat of a moral victory afterwards, delivering a well-placed superkick to Elgin’s manager Truth Martini.

“The crowd in the Ted Reeve Arena is just insane,” said Elgin. “There’s just nothing like it. I think they’re even on par with New York City. They’re live and they’re with it.”

Roderick Strong certainly earned the right to wear an ROH Championship, having the fight of his life against “Belfast Bruiser” Fit Finlay. The match for Strong’s TV title was a very technical one, but in the end, Strong bested the Irishman with a running Mafia kick. At the end of the match, Finlay not only received a standing ovation, but also chants of “Please come back!” In all his years in ROH, Strong may have developed his own bond with those same fans.

“ROH fans are a little too hard on the product, just based on the fact that they don’t want to enjoy it anymore. They want what they want, and they want it like that always,” Strong said a while back. “It’s like any relationship. You never think it’s going to go through rough spots, but the fans have stuck with Ring of Honor through the tough times and can now appreciate the product for what it is.”

Ring of Honor returns to Toront on Saturday, October 13th, at the International Centre in Mississauga.