Right off the bat, it is necessary to point out that Gorgeous George Jr., who died May 12, 2012, of cancer, is not related at all to the famous Gorgeous George from the 1940s and 1950s, even though he copied his gimmick impeccably and legally changed his name to George Wagner as well.

Gorgeous George Jr. carved out a good career on his own from the mid-1960s into the early 1980s, and while his name and gimmick may have been borrowed, he wouldn’t have lasted without talent of his own. 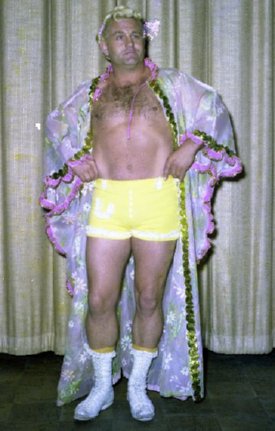 As Gorgeous George Jr., he was a champion in singles and tag team, and would later be a manager as well, primarily for The Mongolian Stomper Archie Gouldie, in Knoxville, Tenn., and Mobile, Ala. “I guess because of his name, probably, he had more heat than anybody,” Gouldie said.

His story actually starts on August 2, 1937, when he was born Charles Richard Phelps in Olivia, Minn., to William and Lila Phelps. His father worked for the Milwaukee Railroad, and the family, three boys and two girls, traveled all over the country.

When he was old enough to head out on his own, Phelps started a band, Dick Phelps and the Echo Men, and he played guitar, piano, drums. He also worked in a cement block factory, unloading blocks, and gained a fair-sized chip on his shoulder there. Tough and with a love of fighting, Phelps would end up working on the athletic shows on the traveling carnival circuit, under promoter Chief Little Wolf. One of his Minnesota buddies was Eddie Sharkey, who would become a wrestler as well, and later the trainer of the likes of the Road Warriors and Rick Rude. On the AT shows, Phelps would box or wrestle, and he also ran an optical illusion game, where it was head of a human and body of a spider, and a rock’n’roll burlesque show.

Next up, he was off to Arizona, where Iron Mike DiBiase trained him to be a pro wrestler.

Phelps only trained about two weeks

“I had a lot of athletic ability and I was well coordinated,” he said in a long interview with Scott Teal’s Whatever Happened To … newsletter.

His first match came against Bob Hamby: “The poor guy was fighting for his life because I think I pulled every hair out of his head that he had left. I grabbed him in a headlock and … I’d catch myself finding my mind back out on the street. I’d think, ‘Uh, oh!’ Then I’d loosen up. When it was over, he says, ‘I’ve had easier street fights than that.'”

You could take the man off the streets and into the ring, but you couldn’t take the streets out of the man, he explained to Teal. “At first, the transition of pretending to be stiff and being stiff was hard for me. I had been a fighter all my life, so I went in there for blood and guts. Every time I locked up with somebody, it was like locking up with a bull elephant.”

With the original Gorgeous George having died in 1963, Phelps was free to pretend to be Gorgeous George Jr. His mother-in-law made his robes, copying what she saw from photos of “The Human Orchid.”

It wasn’t the last time that family would play a part in his career either, as, like the original, he had his seconds that accompanied him to the ring.

Gorgeous George Jr.’s first valet was his brother, Bob, in Arizona. Up next would be Frenchie Bernard, whom he met in Vancouver, and was with for a couple of years. His nephew was Sir Bradley for a short while, followed by his brother-in-law, Reese. Finally, Suzette was his third wife Brenda.

The GG gimmick came naturally: “I loved it. It was showmanship, which I loved. When I was a musician, I could stand on stage and sing and do comedy. That just took me where I left off. I had no reservations about it at all.”

He wasn’t always Gorgeous George Jr., though. After losing his hair before departing the Arizona territory, he went to Missouri, where Phelps worked as Dick Marshall, the Fighting Marine.

When his hair grew back, so was Gorgeous George Jr. But this time, in Oklahoma, he was a babyface, teaming with Jerry Kozak, Haystack Calhoun and Jack Brisco. It was in Oklahoma that Phelps legally changed his name to George R. Wagner.

There was one more variation too, in Vancouver, for promoter Rod Fenton.

“Fenton was good friends with the original Gorgeous George, so when Gorgeous George Jr. came into Vancouver, Fenton wouldn’t let him use the Gorgeous George name. Instead, he billed him as Gaylord George,” wrote Joe Hamilton in Assassin: The Man Behind the Mask. “I practically started George Jr. years earlier when I took him from Phoenix, Arizona, where we worked for Ernie Muhammad, to Kansas City.”

Part of the reason, said Phelps, was that he wouldn’t kiss butt. “I was more a homebody than I was an office stooge,” he told Teat. “I would have liked to have made it a little further.” 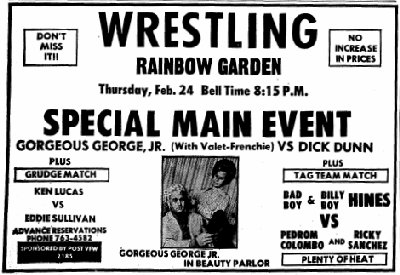 One of the names GG Jr. is most associated with is Bobby Shane, with whom he held the championship tag titles in Florida and Georgia.

“He was a good friend of Bobby Shane and he was given a good push. he was a good entertainer too. He was good,” said Moose Morowski, who got to know the pair in Australia, where Shane was the booker and feuded with Gorgeous George Jr.

As a manager, Gorgeous George Jr. would often don the tights to help his charges. Gouldie was his main guy, but he did also manage Mike Boyette and Frankie Lane.

Post wrestling, Phelps was a carpenter, then drove a truck.

He stayed friends with Scott Teal, whom he had met when Teal worked in the Florida office and later for Nick Gulas in Nashville. Like Phelps, Teal drove a truck. In 2009, George called Teal on the cell phone, and the met up on the road.

“We’re both truck drivers and he wanted to know where I was. Turns out, he was less than eight miles ahead of me on I-65 south in Elizabethtown, Kentucky,” recounted Teal. “We stopped at a rest area and, when I told him I wanted to take a photo of him by his truck, he showed me he still had the guns.” 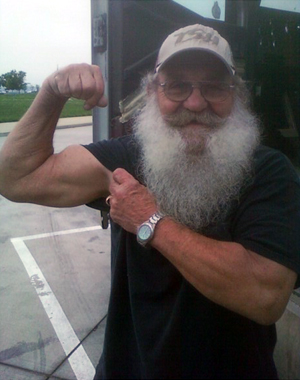 Gorgeous George Jr. poses for Scott Teal in 2009 at a rest stop along the highway. Photo by Scott Teal, Crowbar Press

According to Teal, George has been in the hospital for almost two months. He woke one morning with pain in his hip so bad that he was taken to a nearby hospital, and later life-flighted to Centennial Hospital in Nashville. Tests revealed an infection in his hip caused by a bacteria called MRSA, which is difficult to treat. Doctors scraped out the infection and got him up and moving around. They also discovered a mass in his right kidney and did tests on April 16 after the procedure to clear up the MRSA. Turns out it was cancer.