On Saturday, Kevin Steen became the 17th Ring of Honor World champion, and the first Canadian to do so. After all his bold talk, Steen came through.

In front of a jam-packed Ted Reeve Arena in Toronto for the Border Wars iPPV, Steen won the ROH World title by defeating Davey Richards with the move he’s more associated with — a move banned by ROH officials not too long ago — the Package Piledriver. 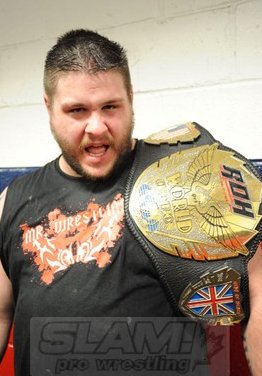 What were his first thoughts after winning this long-awaited championship?

The crowd was behind Steen right from the get go. Early in the night, there were chants of “Kill Steen Kill” in the arena. A contingent of Montreal supporters even made the trip, hoping to see Steen get his hands on the title.

“Yeah, that was really something. As soon as the match before us came back, I heard the ‘Kill Steen Kill’ chant and it fired me up pretty good. The crowd definitely helped,” said an overwhelmed Steen after the match.

Steen is truly “The King of Indies,” as he became the first wrestler to hold both the ROH and Pro Wrestling Guerrilla (PWG) World titles.

“I think it has a great ring to it!” expressed Steen, who is also one half of PWG’s tag team champions.

From his first ROH opponent, B-Boy, to former ROH booker Adam Pearce, Steen received praise on Twitter from a lot of his pears the past two days. Pac, Tyson Dux, WWE World champion and former ROH World champion CM Punk and even arch-rival El Generico are amongst those who sent him their congratulations on his big accomplishment.

Winning a wrestling title is for a wrestler the equivalent of winning an Academy Award or a Grammy, especially one with such reputation as the ROH World title. Usually, after winning an award, an artist will have a few minutes to thank whoever he wants.

Accordingly, SLAM! Wrestling decided to give Kevin Steen such opportunity.

“I just want to thank my parents for giving me the chance to be a wrestler … they paid for my training and never, ever tried to discourage me. They were behind me from the start, 100%. My wife and my kid too because they put up with my insanity and obsession for pro wrestling which can’t be easy. And last but not least, myself. I f—ing rock!”

Steen sure did rock the building on Saturday night, but now that this one is in the books, what else needs to be accomplished for him in ROH?

Exactly the kind of answer you’d be expecting from “Wrestling’s Worst Nightmare” and your new Ring of Honor World Champion, Kevin Steen.