A lot can happen in three years. When SLAM! Wrestling last spoke with Nicole Matthews, she was a star on the rise. Today, her career has flourished internationally both as a singles wrestler and as part of a tag team with partner Portia Perez. Along the way she has won several championships and wrestled in both Australia and Japan, while continuing to engage, thrill, and incite wrestling fans everywhere.

However, the Vancouver, British Columbia native has continued to study her craft; Japan was one example of that. 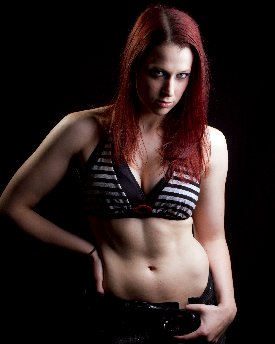 “I learned to be adaptive and to wrestle a different style than I usually do. It definitely took me out of my comfort zone, and that’s how you grow,” Matthews told SLAM! Wrestling. “The style was a little more fast-paced compared to how I usually wrestle in North America. My favorite match over there [Japan] was the Ninjas versus Hiroyo Matsumoto and Saya. It was the last match of the tour, and everything just clicked. I found it surprising how appreciative of comedy the crowd was. Obviously the Canadian Ninjas had no problem obliging to that. The crowds in Japan tend to be less rowdy, but more appreciative. It was an experience I will always treasure.”

Out of the many titles she has won, Matthews cites the SHIMMER Tag Titles as being the most personally gratifying because she had the opportunity to share the championship with her tag team partner Portia Perez. They call the team the Canadian National International Nation of Jalapeno Awesomeness (NINJAs).

“Honestly, just being able to be able to team with Portia so frequently was the highlight. We feed off each other incredibly well, and I often wish we had the opportunity to team up with each other more often,” Matthews said. “One thing I can say for sure is that her mind for wrestling has rubbed off me. Without a doubt, of everyone I’ve met in wrestling, she gets it more than anyone I know. Portia understands wrestling on such a deep level. In any situation, I can ask for her opinion on something and she’ll think of a solution that I never would have and it’ll blow me away.”

In fact, Matthews found that it didn’t take her and Perez much time to gel as a tag team. “We teamed up for the first time literally the day after we met. The first couple times weren’t as smooth as it is now, but pretty damn good for teaming up for the first time. Our personalities meshed right away.”

Back in 2008 in Scranton, Pennsylvania is the only occasion that Matthews has wrestled against Perez. “Now I was excited, because that’s the town The Office is set in. Apparently, that’s the only thing to get excited about though! There was barely anyone at the show. I think I can confidently say no Canadian Ninja fans have ever seen us wrestle each other! I would one day be interested in wrestling Portia. It’ll be one to remember, that’s for sure.” 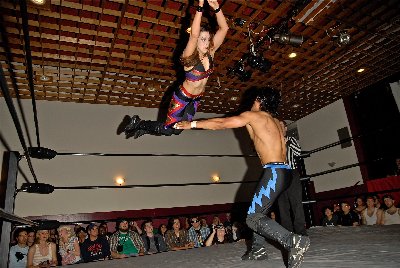 Nicole Matthews takes to the air.

Another special time in her career was Matthews’ three tenures as ECCW Women’s Champion. “I would say my most memorable reign was my last one. Winning the title in a tables match against Tenille Tayla was a spectacular way of starting the reign out. Also, for the year I held the title, I really evolved to an all-around character. Before, I mostly focused on just developing my in-ring abilities, but during that last title reign, my promo skills and character became more established. As strange as it may sound, losing the title to KC Spinelli exactly a year after I won it was the best way to end the tenure as well. We told a really compelling story with two polar opposite characters. Plus, we topped it off with a great match.”

To ECCW Women’s Champion KC Spinelli, Nicole Matthews is nothing short of an icon. “She is the most well-known, top indy wrestler in the Pacific Northwest Wrestling with a fan base that will not let you forget that. Nicole’s self-expectation and drive to out wrestle most men is impressive to say the least. She has travelled internationally to show her talent to the world and is never short on funny spots or new talents. It means the world to me that I have not only been able to learn from Nicole, from the very beginning of my career, to now owing my accomplishments these last few years to her kindness of caring for someone who is just like her, just wanting to wrestle. It is my honor and privilege to say I know what I do because of Nicole Matthews.”

Matthews had a role in training KC Spinelli so the question was asked as to how Matthews felt about Spinelli beating her for the ECCW Women’s title. “I couldn’t be more proud of her. Spinelli had a rough start in wrestling, but she stuck it out. She proved to herself and to everyone else she has what it takes to be a top name in female wrestling, and continues to prove that. Her most recent showing at SHIMMER really showed what she’s made of. I’m confident she’ll continue to work hard, listen to advice from those around her and continue to impress in ECCW, SHIMMER and coming up, Femme Fatale.”

Two titles that Matthews is eyeing are the International Femmes Fatales title from the Montreal NCW promotion and the prestigious SHIMMER championship. “My main goal is to one day hold the SHIMMER championship that Saraya Knight currently holds. It’s amazing how many opportunities SHIMMER has given me, and to represent the company one day as champion would mean so much. The Femme Fatales title is also a goal. The quality of Canadian female talent is definitely on the rise, and the woman who holds that title [Kalamity] is arguably the best in the country.”

In Femmes Fatales, Matthews had the chance to work with Mercedes Martinez in Quebec, which she says was a great experience. “Whenever you wrestle who has more experience, you learn. The crowds in Quebec are quite loud! I’ve quickly discovered they do not like it when you proudly declare you’re an Anglophone.” 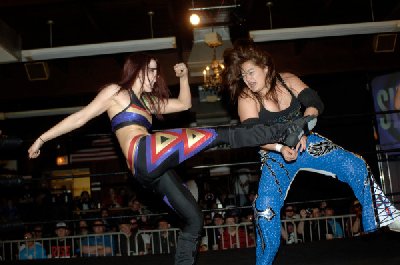 Nicole Matthews delivers a kick to the midsection.

When initially wrestling in Japan and Quebec Matthews did find she struggled with the language barrier. “Honestly, I always feel bad because they always speak much more English than I speak Japanese, or French. Really it’s me who makes it harder to plan a match due to my language ignorance! Over time, it’s become an easier issue to deal with. Luckily, wrestling is a bit of an international language that everyone speaks.”

However, Matthews’ immediate goal is helping her ECCW stable The Riot regain the ECCW Tag Team Titles. The purpose as Matthews sees it for The Riot is bringing the fun back to ECCW. “It’s a group of uber-talented and creative wrestlers who will put on the best match of the night, and do it with a tremendous amount of energy. Mediocrity and boringness are the antithesis of what Riot is about.”

Alex Plexis, one of Matthew’s Riot stablemates, described that what makes them so unique and engaging is that it wasn’t something that came about due to circumstance or all of them being thrown together by ECCW. “It was an initiative we all took to get ourselves together on the shows, have fun and be entertaining. We’re all close friends outside of the wrestling business and I think that gives The Riot a chemistry that’s easy to connect with. Nicole really adds to that. She brings a great character to the table that’s so genuine it makes anything she’s involved in that much more real and entertaining. That character combined with her wrestling ability makes her and incredibly dynamic and entertaining performer.”

The Riot stable is made up of Matthews, Plexis, Ravenous Randy Myers, and Andy “The Dreadful” Bird. “I could not have asked for a better group of guys to work with. The way the four of us feed off each other is amazing. My creativity and excitement for wrestling has been at an all-time high when working with these guys. By nature, I’m a complete goofball and kind of a prick, and most people don’t know how to handle that. We’re all similarly natured, and not having to stifle yourself in the ring is incredibly liberating. Every time someone sees us in the ring, we want them to want to come back to see more.”

Myers has only positive things to say about working with Matthews. “Nicole is a one-of-a-kind talent. A true star who does things her way. It’s an honor and privilege to be on the same team as her.” 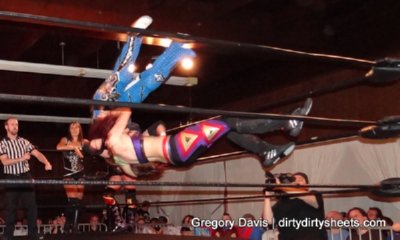 Another of Nicole Matthews’ travels took her over to Australia. While there she found that the style of wrestling and the crowds were very similar to those in North America. Out of the matches she had while in Australia, Matthews was very happy with her three-way match against Jessie McKay and Madison Eagles. “One of my favourite matches I’ve had, for sure. Jessie and I have worked each other a fair amount, and we always have good chemistry in the ring together. I hadn’t worked Madison very much before Australia, and it was amazing. In my opinion, she’s in the top five of female wrestlers in the world.”

Also, while she was in Australia, Matthews had the chance to connect with former ECCW Pacific Cup winner RICK. “RICK was on one of the shows I was on! We had actually just a month earlier worked the same show in Surrey, BC for ECCW. So I was on two shows in a row with RICK…one in Canada and one in Australia! Wrestling sure makes it a small world.”

In the future, Matthews has said she would like to go on a tour of Europe and one particular wrestler she hasn’t had the chance to face in the ring in a singles match as of yet. “One on one, I have never wrestled Sara Del Rey, and I would absolutely love to.”

As one of top women wrestlers that Canada has produced, Matthews has a very unique perspective as far as the current state of women’s professional wrestling. “I think on the independent level, female wrestling is doing really good. On a mainstream level, I still think it’s lacking. Whether it’s talented females not getting opportunities there, or questionable hiring methods, there is definitely a difference of quality between indies and mainstream. I hope that changes in the future, and wrestling fans everywhere get to see talented wrestlers on their TV, female or male.”

Despite all the time that her wrestling career takes up Matthews is still studying kinesiology part-time at Simon Fraser University. Surprisingly she’s never been recognized while on campus. “I have never had that, no! I bet it’d be a bit awkward if it was in a lab while I was dissecting a rabbit…”

Alongside wrestling around the world and her studies, Matthews also works at a full-time job. “I am an Aquatic Program Supervisor now, which is a full time job with the city. That career is my main focus now, along with wrestling. Circumstances have made school take a bit of a back seat.”

Yet even with her studies and full-time job, Nicole Matthews plans to continue to enthrall fans the world over.