Extreme Championship Wresting was known for very violent matches, but as the ECW Unreleased Vol. 1 DVD/Blu-Ray proves beyond a shadow of a doubt, the promotion was capable of putting on very high caliber wrestling matches. 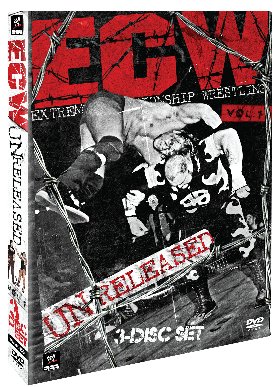 One of the standout matches in the collection is a match between Eddie Guerrero and Dean Malenko for the ECW World Television title. While these two wrestlers met several times during their WCW and WWE days, the match shown here between them is in many ways better. The biggest difference is that in ECW the match was given a lengthier period to breathe and consequently you can see Guerrero and Malenko feeling the freedom to try different things. As a result the false finishes come fast and furious and a typical finishing move is not the end of the match.

There is also a great match between Chris Jericho and 2 Cold Scorpio with a ton of submission moves used during the match that are rarely seen nowadays. The match demonstrates not only how good Jericho was at this early stage of his career, but also the great talent that Scorpio was in the ring.

The collection contains the infamous NWA championship match between Shane Douglas and 2 Cold Scorpio that led to the formation of Extreme Championship Wrestling, the Sabu and Taz grudge match from Barely Legal 1997, and an unending array of skills being demonstrated in a match between Rob Van Dam and Jerry Lynn from 1998.

The host for this collection is the voice and play-by-play commentator for ECW, Joey Styles, and unlike other recent WWE releases, Styles provides a great deal of background and insight into what was happening in ECW at the time that each of the matches take place. One thing that becomes apparent listening to Styles’ commentary on the matches in this collection is how good he was. His passion and knowledge bleeds through in virtually every match and instantly helps you to connect and get into the excitement. Another plus was that many of the matches include interviews with the participants which adds greater dimension about the storyline motivation for the confrontation between the wrestlers.

Of course, no ECW collection would be complete without a good degree of violence — particularly outside the ring. A great example of this sort of match is the ECW World Heavyweight match between Taz and Shane Douglas. This match was Taz’s first heavyweight championship match and instantly demonstrated that he belonged at this plateau.

Other matches includes the full match where Tommy Dreamer won the ECW Heavyweight Championship from Taz in April of 2000, Shane Douglas fighting Cactus Jack (in an uncle Eric t-shirt no less!), Mike Awesome versus Masato Tanaka, Tommy Dreamer against Justin Credible, Rhino in a match with The Sandman for the ECW World Television Title, and many other great matches. Personally, being able to see the full Tommy Dreamer/Taz match was a real highlight, especially the speeches after the match.

A fascinating part of watching the various bouts is you can slowly see the production values improving because they are in chronological order. In the early matches you can clearly see that the ECW crew are learning what the best way is to shoot a particular match, but by 1999 the quality of the television production was very strong.

The DVD version does not include any extras, but the Blu-Ray version includes two extra matches, Tommy Dreamer versus Jimmy Snuka and Terry Funk versus Sabu versus Shane Douglas, both of which are pretty strong.

The balance shown in ECW Unreleased Vol. 1 is impressive as it would have been incredibly easy to simply focus on wrestlers that fans are familiar with from their time in WWE such as Rob Van Dam, Taz, Chris Jericho, Eddie Guerrero, Tommy Dreamer, Cactus Jack, and Raven. Yet an equal amount of attention is given to Justin Credible, Jerry Lynn, 2 Cold Scorpio, and Shane Douglas. Still there will be one shock for ECW fans watching this collection, which is that there are no matches featuring the Dudley Boyz and Al Snow. Both were large parts of ECW and for none of them to be included in this collection is a strange omission.

Despite that minor complaint I found myself tapping out to the high quality, passion and great matches found in ECW Unreleased Vol. 1  DVD/Blu-Ray and can only hope there will be a second volume soon. So if you’re looking for a fun wrestling DVD or Blu-Ray pick this one up while you can!