Nikki Matthews vaulting to the top

Nicole Matthews has enjoyed a very quick rise through the pro ranks and her contemporaries believe a great deal more awaits this talented relative newcomer. 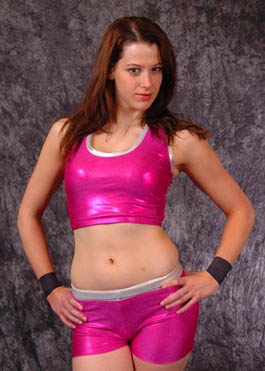 “I was extremely lucky how quickly I got into SHIMMER,” said the 22-year-old Coquitlam, British Columbia native and resident. “I initially sent a tape December of 2006 when SHIMMER had an open casting call, so to speak. He [promoter Dave Prazak] e-mailed me back after watching… and basically said I was still a little too green for SHIMMER, which I totally appreciated and agreed with.”

“Nicole’s first demo was sent to me when she had less than a year of actual experience as a professional wrestler,” said Prazak. “Much like I did with her eventual partner Portia Perez a year earlier, I let her know what I thought of the first demo and encouraged her to work as many independent wrestling events as possible to get more ring time, work on a few things, and gather new footage to include on a follow-up demo. I remained in contact with her, and when a last-minute opening came up on our volumes 15 and 16 taping a year later, we gave Nicole the opportunity to come to Chicago and show us what she could do.”

Matthews has shined for the promotion since, a big step from being the spectator she had been for most of her life.

“I have been a huge wrestling fan, mostly watching WWF, since as long as I can remember,” said Matthews.

She remembers her brother getting her hooked on wrestling at an early age, as well as taking her along with him to Extreme Canadian Championship Wrestling (ECCW) shows when she was a teenager. In late 2005, she saw her friend Sid Sylum debut there and was impressed. She relayed her excitement to Memphis, currently the promotion’s champion, and he suggested she give the sport a try for herself. About a month after seeing Sylum, she began training.

“For the first six months, I had three trainers: Michelle Starr, Aaron Idol, and Scotty Mac. Starr was the booker of ECCW at the time, and he needed girls to debut quick so Rebecca Knox had some opponents. So after three months of training, me and Veronika Vice debuted in February of 2006. We both continued training, and six months into our training, the ECCW school switched over trainers, and Vance Nevada, Disco Fury and Halo (now unmasked and named Artemis Spencer), were the new trainers. I’ve been hugely fortunate in having such a variety of trainers.”

“When I took over she had the basics,” said Fury. “She had another female to work with, which helps. Veronika and her could learn the ropes together. I think that really was a bonus to them both.”

Matthews’ natural athleticism — she competed in swimming and volleyball in high school — assisted her on the cardio side of wrestling training, but it did little to prepare her for the abuse of ring action.

“The bumping obviously wasn’t the most fun thing to do at first. The thing that bruised me up the most though was running the ropes! I had huge, dark bruises near my armpit and hips. I thought I was hiding them pretty good, but my mom got a peek at my hip bruise, and she freaked,” said Matthews.

Nevertheless, she never thought about giving up, stressing she “wanted it way too much for that to happen.”

“I had a great training experience. There was a great group of people when I was training. There is about a group of 10 of us who trained within a year of each other, and we are a pretty tight-knit group.”

“The crop of students at that time was very dedicated to learning all they could from everybody that came through the door. Some people would tell the stories and some would kill them with cardio,” said Fury. “I really can’t remember a time in her time with me when she didn’t come out with something new. Chain wrestling is what she does best. She spent the most time on doing that. I know she smiled every time one of the instructors said that’s how the class would end.” 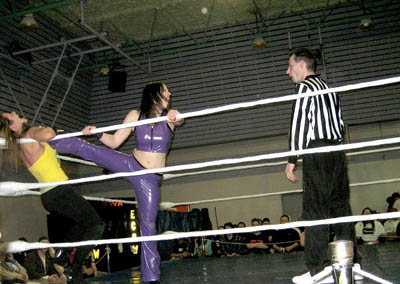 Matthews keeps her opponent under control and shares her thoughts with the crowd.

In addition to ECCW, Matthews wrestled for promotions across the Canadian Prairies in her first year, thanks in large part to Nevada.

“Early in our careers, me and Veronika, (along with Gurv Sihra and Vance Nevada), did a cross-Canada tour, hitting Alberta, Saskatchewan and Manitoba. Vance set that up for us in the summer of 2006. We set up, wrestled, and tore down every show,” Matthews said, and admitted with a laugh that these days, she lets the new students do the setting up and tearing down.

Once in SHIMMER, Matthews began making her bones wrestling mostly tag matches. She and Perez formed their tag team in October 2007, and together formed the Canadian NINJAs (National International Nation of Jalapeño Awesomeness) in March 2008.

“The only tag experience I had before that was mixed tag action, partnering with Sid Sylum for the most part. Portia and I versus Ashley Lane and Lorelei Lee was the first all girls tag match I ever had,” Matthews said. “One of the differences I found was the fact that you need to be aware of your partner and have to be concerned about your chemistry together. Luckily for me and Portia, we clicked right away. Obviously Dave Prazak saw something in us and knew we would click. An awesome difference between tag and singles wrestling is sharing the bumps!” 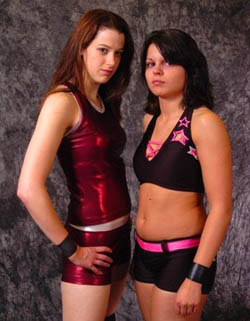 Perez noted the two never even met each other before their teaming, only becoming acquainted for the first time when Perez picked up Matthews from the airport in Chicago. But they soon became good friends, “bonding over French toast platters at Denny’s,” according to Perez.

“Nicole was still quite new to wrestling when she first came in to SHIMMER, but her talent was very evident even then. I remember in our second tag match, which was against Ariel and Josie, standing on the apron watching her and just being so impressed by her athleticism,” Perez said.

Perez said the two had good chemistry from the start and they have been able to build on it, to the point where they now know each other’s personalities, strengths, and weaknesses.

“Over the past couple years she’s grown into a very confident and well-rounded wrestler, and she’s only going to continue to get better. Her ability to step up and excel in whatever situation she’s put in — tag team or singles, comedy or mat wrestling — is something that I believe to be very special,” said Perez.

“The initial tag team outings from Portia and Nicole from 2007 are like night and day compared to their tag matches now,” Prazak said. “They showed potential at a time we were starting to build our tag team division, so it worked out that we were able to sort of hide how green some of the new talent was by having them in limited roles in tag team matches at first.”

The gains they have made is evident, as Matthews and Perez won the SHIMMER tag belts May 3, 2009.

Prazak called the Canadian NINJAs one of the most established acts on SHIMMER’s events, and heaped praise upon Matthews.

“Without question, Nicole has shown the most improvement and growth as a performer out of anyone on the SHIMMER roster during the past two years. We’ve seen her develop into one of the best young female heels in North America right before our eyes, improving with each passing DVD release,” he said, adding a recent singles match she had against Daizee Haze was a gem. “Nicole proved in her matches against Nikki Roxx [formerly Roxxi Laveaux] and Daizee that she’s much more than a tag team wrestler in SHIMMER, and there’s a lot of room for her to grow even more as a singles star in the future. The sky is the limit.”

“I am proud that she is doing very well for herself and one day I hope she can return the favour to some other up-and-comer,” added Fury.

When not in the ring, Matthews is studying kinesiology at British Columbia’s Simon Fraser University, and she also works as both a lifeguard and swim instructor. But it is very apparent that wrestling is where her heart lies.

“It has been an unreal experience. There is so much talent and knowledge in that locker room, it is mind blowing. And everyone is so encouraging. Everyone just wants to have a good show. It has definitely given me more exposure. I was an unknown before coming to SHIMMER, and now little by little, people are getting to know Nicole Matthews.”