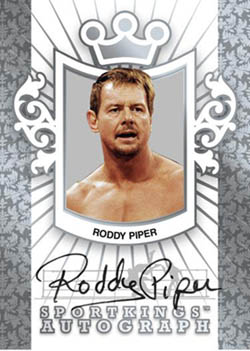 Rowdy Roddy Piper is a very familiar name to fans of the squared circle and to some moviegoers who have seen him over the years on the big screen. Either way he always leaves an impression, sometimes a good one and sometimes a bad one, and for that reason and a host of others he made the cut for the third edition of the wildly popular Sportkings series this year.

Sportkings Series C is a high-end trading card set that pays homage to some of the greatest athletes in the history of sports and entertainment. There have been just two other wrestlers in the previous releases so this is quite an honor for “Hot Rod”.

“Roddy was one of my all-time favorite wrestlers and he is a Canadian from Saskatoon to boot,” said Dr. Brian Price the owner of Sportkings LP, and a Canadian himself. “After Hulk Hogan and Andre the Giant, Roddy was a perfect fit for the upcoming Sportkings Series C.”

There are two very limited cards that fans can look for. The first is a beautifully painted base card of him that shows off a vintage pose of the former champion. 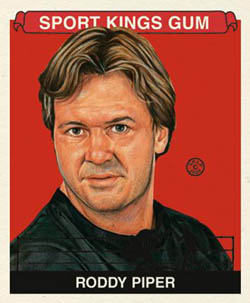 The second is a “Sportkings Autograph” card showing the legend in the latter stages of his career. That card should be very sought after since this is the first certified autographed card of him, in a multi-sport release, and there have only been a handful of his certified autographs in the marketplace over the years. These days Topps has been the only place to get an autographed card of his until now.

The release will co-inside with the National Sports Collectors’ Convention in Cleveland, which is set for July 29th through August 2nd.