The 10-year anniversary of the death of Owen Hart on May 23rd passed rather unremarkably. Aside from a few articles — notably the Calgary Sun‘s piece from February(!) — Owen Hart’s widow chooses positive path — and a lot of Facebook status updates, it went by unrecognized by mainstream press, but not by those that loved Owen.

It is hard to believe ten years has passed since that day that changed wrestling forever. His influence is there. I know two people who have named their sons Owen in tribute to him. Many wrestlers still use his moves. On Saturday I attended a Prairie Wrestling Alliance Show in Calgary. It started with a ten-bell salute in memory of Owen and Davey Boy Smith, and several wrestlers used trademark Owen Hart spots during their matches. The current generation of wrestlers grew up watching Owen and you can see that influence in many of them. 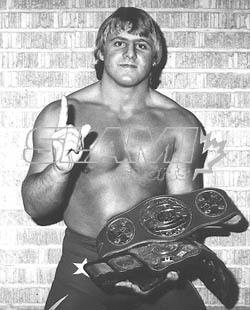 Owen Hart was number one early in his career in Stampede Wrestling. Photo by Bob Leonard

Owen’s memory also lives on in the Owen Hart Foundation, which his widow Martha established in December 2000 with part of her wrongful death settlement with the WWE. The foundation supports a housing program and a scholarship fund. Every spring the Foundation brings a Comedian to Calgary to raise funds. Past performers have included Bill Cosby, Howie Mandell and Jay Leno. This year the foundation presents Jerry Seinfeld on June 16th.

In the weeks leading up to the anniversary, I found myself reading chapters of wrestler’s autobiographies about Owen. I’ve also gone through my DVD collection to find his matches and relive the memories. While a compilation dedicated to Owen hasn’t been released — and probably never will due to the ill feelings Martha has towards the company — there is lots out there to see on other sets; matches against Davey Boy Smith, Shawn Michaels, Steve Austin, Bret Hart, and Edge just to name a few. Watching these reminds me of what an incredibly talented man Owen was. I would rather watch a classic Owen Hart match on DVD than just about anything WWE or TNA has to offer today.

What I will remember most about Owen is the one instance in which I got to spend some time with him. I was invited to stay for the traditional Sunday night dinner at Stu and Helen’s house in the summer of 1996. I will never forget walking into the big dining room and Georgia Annis said, “Jason, you are sitting next to Owen” with a knowing smile. I took my seat, too nervous to say much because one of my idols was sitting next to me. It did not take long for him to make me feel comfortable and start chatting me up. I tried not to talk to much wrestling because this was family time, but he did good-naturedly rib me in an attempt to make me believe he and Davey were losing an important tag match on Superstars. I still clearly remember Owen offering me honey for my tea over dessert. It’s a small thing, but even now seems funny to have a big, world-famous wrestler turning and asking me that.

After dinner Owen brought young Oje out to the ring that was always set up in the backyard and watched his nephew Matthew Annis practice backflips from the top rope, just like Owen did. A few weeks later Matt contracted flesh-eating disease and died. T.J. Wilson (Tyson Kidd in ECW), then just 15, was also fooling around in the ring, and taking video. I have a brief video clip of Owen shaking my hand in the ring, and me commenting, “This is probably the closest I will get to being in the ring with Owen Hart” before the camera battery died. I wish that statement hadn’t been true.

I will always remember Owen, from the stories that were told to me by others and I read in books, for his incredible matches, and for the way he treated a 17-year-old kid with dreams of his own who was just awed to be in his presence. I miss him and I always will.