Even though Bobby Roode arrived late for the scheduled sit-down interview with SLAM! Wrestling earlier this week, that doesn’t mean he isn’t mindful of the time. In fact, when you’ve held the TNA World Heavyweight Championship longer than anyone else in the company’s history, you truly appreciate every minute of every day.

“Seven months,” he said proudly, talking about his lengthy reign. “I’ve had the opportunity to do it for seven months, and it’s been great. Because it’s always been my dream.” 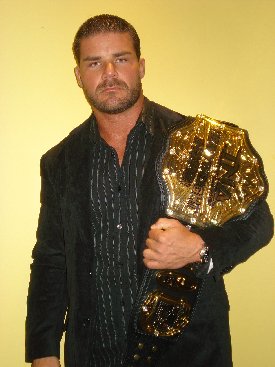 Bobby Roode poses with the TNA World title on Tuesday in Toronto. Photo by Bob Kapur

“When I was watching wrestling growing up, the world title was always the main event on TV or pay-per-view. When you get into the business, you want to be a world champion, because when you are, you’re the main event guy, you become the focus of the company — that was always what I wanted. Now that I’ve gotten the opportunity, I actually want it more.”

Many wrestling fans and pundits actually thought that it might have happened a few years ago, during Roode’s initial singles run between 2006 and 2008. After a lengthy feud with Eric Young, Roode engaged in a high-profile feud with Booker T. Roode impressed many with his ability to compete among the company’s elite, and it looked like he was poised to break out into the company’s upper echelon. Instead, his singles run inexplicably came to an end.

“Honestly, I was hoping to (have a title run back then),” he confided. “But at that time, where our company was, and the people that were in the company, wrestling-wise, who knows how successful a title run for me would have been if I’d gotten to that point. Obviously people didn’t think it was the right time.”

Instead, Roode was paired with James Storm, and over the next few years, the duo achieved tag team greatness.

“Everything happens for a reason,” he reflected. “It was a real learning experience for me. I was right at the peak of getting to (the top tier), and when it didn’t happen, I felt it was taken away from me. James was at the same point at that time, too. We both felt like they had pulled the rug out from under us. And that just lit a fire under us — I think that’s why we were so successful together.”

“Beer Money — and at the time, we weren’t even called Beer Money — was only supposed to be together for a short time, maybe two or three months. But together we achieved a lot of success, and looking at where we are now, it bettered both of our careers. Now we’re both getting a second opportunity at rising to the top and being singles stars.”

The experience taught Roode a valuable lesson about patience and perseverance.

“I realized that you have to make the best of things. And that when you’re given the ball, to carry it the best that you can. I think I’ve done that.”

Cut to a year ago, when Roode was one of the participants in the company’s first Bound for Glory series. The tournament featured a number of TNA’s wrestlers, earning points for winning matches, with the winner earning a title shot at the company’s major annual Bound for Glory PPV. The tournament became the focus of the company last summer, and considered results from TV, PPV, and even house shows. With such prominence, Roode’s win not only made him a viable contender for the title, but the most logical choice to capture the belt.

“Last year’s BFG series was a bit of a learning curve,” he said. “It was hard for people to get behind it right away, because nobody really knew how it was structured or how to calculate the points. Even the wrestlers were confused at times. If the wrestlers can’t understand it, it’s hard to expect the fans to understand it. But as far as making new stars and putting a strong emphasis on the championship — I think that gives credibility to the series and to the company.”

The tournament is being held again this year, and Roode is watching with much interest — as it’s his plan to still be champion when this year’s Bound for Glory PPV takes place in October. To do that, though, he will first have to successfully retain at the upcoming Destination X PPV, which will be available on Viewers Choice Canada on July 8. In fact, it is on this week’s Impact that Roode will find out if he has to face Austin Aries at the PPV — Aries will get the opportunity if he surrenders his X-Division championship.

But that also presumes that Roode will still be holding the title in July, meaning that he survives this weekend’s series of house shows, which bring TNA close to the greater Toronto area. On Friday, the action will take place in Buffalo, NY, at the Coca-Cola baseball field. Saturday’s show will be at the General Motors Centre in Oshawa. And on Sunday, Roode and company will be at the Hamilton Convention Centre. 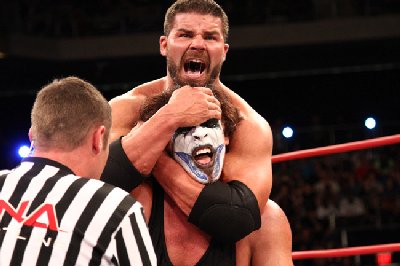 Roode confirmed that he will be appearing at all three shows. But even though the Peterborough, Ontario, native will be on home soil, he doesn’t expect — or even care if — the Canadian fans give him a babyface reception.

“I don’t know that the fans will treat me like a hero,” he said. “Honestly, I’m not going to treat Oshawa or Hamilton any differently than I would Des Moines, Iowa or Louisville, Kentucky. I’m going to go out there and be the guy you see on TV every week — I’m not going to change my style.”

That may be true in terms of character, but that doesn’t mean that a TNA house show is the same kind of experience as watching it on TV. On the contrary, as anyone who has attended a live TNA even can attest, the show is a truly unique experience that’s a lot of fun.

“It’s different, that’s for sure,” Roode agreed. “It’s an up close and personal way to see a wrestling event. To get to meet the people you see on TV, and get a photo or autograph from them. It’s very fan friendly, there are give-aways to come backstage and there are tons of merchandise give-aways. It’s a fun, real family-oriented night. If you’re a wrestling fan, it’s a great experience. I have a lot of fun at the shows.”

What’s more, is that Roode also gets a chance to visit with his family and friends, something that he doesn’t get to do as regularly as he’d like. In the past couple of months alone, he has traveled to Europe for a series of shows, and last week was in Los Angeles and many other cities promoting the company’s summer tour.

“It is nice to come to Canada and spend the night at home in my own bed every night,” he said. “And not having to eat at a Denny’s or IHoP for three or four days in a row. That’s always good about coming to Canada. And to see some friends and family when I’m here, so they can come out to the show and see what I do every day. It’s not a vacation. People think it must be nice to travel the world. It is, and I’m fortunate, but there’s a lot of wear and tear you go through as well.”

Which is not to say that Roode is complaining — “wear and tear” aside, he wouldn’t trade his position for anything. Holding the title as long as he has, he’s as motivated as ever — actually, maybe even more than ever.”

“I’m still learning, and I want to still learn. My eyes and ears are always open, and I want to be better every night. I’m hoping to continue my reign for quite a while. I’m lucky enough to be able to say that I’m the longest reigning world champion in the history of the company, and I want to hold that record and keep it going. I want people to talk about me, and talk about my matches, and be remembered as a great champion who’s well respected and who carried himself well.”