LAS VEGAS – It was like old times. Mick Foley has the audience’s attention, telling story after story about his career and the people who made it happen, including notes to himself hastily written on his hand. The only difference was the location and the reason — Foley received the Art Abrams Lifetime Achievement Award at the Cauliflower Alley Club reunion. And the fact that Foley was dressed a little less haphazardly than normal. 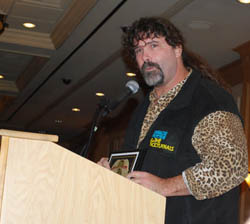 There are few wrestlers who captivate a crowd for nearly 30 minutes the way Foley can, and the time raced by Tuesday night at the Gold Coast Hotel & Casino in Las Vegas, just as Foley had to race out to catch a red-eye flight for a TNA taping for Wednesday.

Introduced by friend and mentor Terry Funk, who had the crowd laughing uproariously, Foley was all over the map with his comments, popping from his high school wrestling coach — who he’d brought as his guest — to his legacy.

With a room full of wrestling legends, including his trainer Dominic Denucci, frequent opponents such as Raven, Rick Steamboat and Funk, and other influences, like Jim Ross, Foley had a hard time fitting everyone in.

He said he had 100 people on his list of people to thank, “and then the plane landed.”

The Lifetime award, named after a key figure in the Cauliflower Alley Club’s history, didn’t quite fit perfectly, he admitted, especially recounting the oft-told tale of the famed No Rope Barbed Wire, Beds of Exploding Barbed Wire, Timebomb Deathmatch he had with Funk in Japan.

But, having questioned Executive Vice-President Karl Lauer that he indeed was the choice, Foley learned that 17 or 19 board members had voted for him. Not knowing who didn’t vote for him gnawed at him, he admitted. “I know Bockwinkel was one of them!” he cracked.

As good as Foley was on the microphone, he came a close second to Men’s Honoree (retired) “Cowboy” Dan Kroffat, who speaks at dozens of charity events a year around Alberta. Looking polished and professional, Kroffat was eloquent where Foley was electric.

Kroffat thanked three key people for his successes, teasing that it would be individuals, when in fact he honored the media for telling their stories and keeping them alive, the other workers for being a team and helping build up stars, and the fans. “Without you, there would be no us,” he said.

The rest of the evening had its light and serious moments.

“Wildman” Jack Armstrong got the Golden Ear Award, given to someone who had multiple names and personalities during their career. “I believe I broke a million miles by plane and a millon miles by car,” Armstrong guessed, launching into some of his many characters, including Lenny Solomon, Super Scorpion and Ali Ben Khan.

On the more serious front, Rick Martel was emotional receiving a posthumous award for his late brother Michel Martel, and Jake “The Snake” Roberts, during the open mic segment, apologized to his eight children for never being around.

Other awards presented Tuesday include Men’s (retired) honoree Alex Knight, Women’s honoree (retired) Darling Dagmar, and the Family award for the Gilberts, with Tommy Gilbert paying tribute to Lou Thesz and son Doug (“the baby”) sharing his love of wrestling. Unannounced ahead of time are the Red Bastien Friendship Award, which went to Darla Staggs Taylor, who had been a fan since she was first taken to the matches at nine months old by her parents, and the Jason Sanderson Humanitarian Award, which went to Lisa “The Adjuster” Haynes for her charity work, Save Our Strays Vermont (www.saveourstraysvt.org).