Those were the results from an all-star card April 20 at the third and final day of the 2011 Cauliflower Alley Club reunion, which provided an evening of laughs, entertainment and emotion for a sellout crowd at the Gold Coast Hotel & Casino.

Slaughter captured the club’s highest honor, the Iron Mike Award, named after club founder Mike Mazurki, for a remarkable career that saw him rise from his original character of “Beautiful” Bobby Remus to become a symbol of American patriotism.

Slaughter told fans and wrestlers from around the world that he was destined to be a wrestler, from the time he snuck into his parents living room as a kid to watch wrestling on TV with his father.

“There was not a Saturday that didn’t go by without our TV trays and our TV dinners,” said Slaughter, a former WWE world champion who now is the company’s goodwill ambassador, helping to raise money for children’s hospitals and other causes.

Long-time friend Roddy Piper, who presented Slaughter at the banquet, singled him out as the only human being ever to be a G.I. Joe doll and personalized the icon, saying his kids still call him “Uncle Bob.”

Piper said Slaughter saved his hide after a wrestling-related stabbing in Raleigh, N.C., tending to his wound and getting him immediate medical attention. That kind of behind-the-scenes incident is something fans don’t see, Piper said.

“Every time I hear his name, I get this tingling and I want to see him, and I’m always sad when I leave him,” said Piper, who handed Slaughter a symbolic silver ear pin that the rowdy one originally received from tough-guy great Gene LeBell.

Slaughter brought the fans to their feet in appreciation for his accomplishments, but Honky Tonk Man had them on their feet for a more lively reason.

After accepting his award as an active men’s honoree, Honky (nee Wayne Farris) talked passionately about a career that will still see him do up to 60 shows this year. 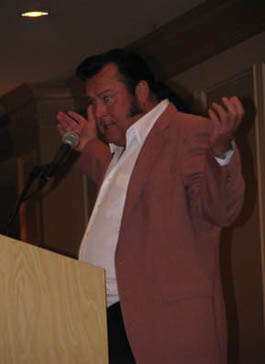 The Honky Tonk Man addresses the audience at the Cauliflower Alley Club banquet before launching into song. Photo by Greg Oliver

“I had this dream of being in pro sports and entertainment. Professional wrestling gave me the opportunity to do both,” said Honky, who was headed for a career as a teacher. “I’ve lived that dream a thousand times.”

At the conclusion of his talk, the longest-reigning WWE Intercontinental Champion hit the floor, strutting and strumming to the familiar strains of his ring music. Joined by former WWE manager Sunny (Tammy Sytch), Honky, clad in a salmon sportcoat and black slacks, had the crowd rock and rolling to the familiar lyrics: “I’m just a Honky Tonk Man/ I’m cool, I’m cocky, I’m bad.”

That gig just about everybody going. “What a performance!” said an admiring Beautiful Bruce Swayze, one of many former wrestlers in attendance, who has a son in the music business in Nashville, Tenn.

Slaughter, Piper and Honky were part of a group with WWE connections that felt as though the Gold Coast had been transformed into Titan Towers West, the company’s corporate headquarters.

In addition to several past WWE champs, also in attendance were Jim Ross, Jerry Brisco, Ricky Steamboat and Bruno Lauer, who all have been familiar figures in the company as road agents, talent scouts and, in Lauer’s case, an all-around gopher.

Lauer received the CAC’s manager award for his at-ring service to dozens of wrestlers as Downtown Bruno and whiny Harvey Wippleman. He joked that most people receive recognition at the top of their careers, while he has gone from a main-event manager and former WWE women’s world champ to a concierge for the company.

“Now that I’m completely washed up, everywhere I go, they want to give me an award,” he said.

Another familiar face from the WWE, Rick Martel, received the CAC’s Lou Thesz Award. Martel held then-WWF tag team titles with Tito Santana and Tony Garea, and also had a 19-month run as American Wrestling Association world champ from 1984 to 1985. In fact, CAC president Nick Bockwinkel said he specifically recommended Martel for the AWA title, calling him “handsome as hell and a great worker.”

Martel, whose brother Michel received a CAC posthumous award the previous night, countered by praising Bockwinkel for “never taking it easy on me.”

Also recognized at the 46th club reunion were Awesome Kong (Kia Stevens) who is poised to debut in the WWE after making a name for herself as a monster female wrestler in the United States and Japan.

“I wasn’t a skinny bitch,” laughed Kong, who praised Ross and “Stone Cold” Steve Austin for helping to get her into the WWE.

Another former WWF tag champ, Pat Barrett, received his International Award a year late — the Icelandic volcanoes of 2010 prevented him from passing across the Atlantic last year from his home in Ireland.

The good-natured Barrett regaled the crowd with stories from his worldwide travels, concluding: “Every country in the world has wrestling in one form or another. It doesn’t have baseball and it doesn’t have rugby but it has wrestling and we should be proud of it.”

Robin Smith, better known as “Rockin’ Robin” received the retired women’s award and joked that she would not repeat her attempt to sing America the Beautiful to open WrestleMania V in 1989.

A former WWF women’s champ, she recalled that she was raised in an unusual manner, with her late father, “Grizzly” Smith, and half-brothers Jake “The Snake” Roberts and Sam Houston, wrestlers all.

Even as a school child, Smith said she felt a little out of place when a favorite teacher asked pupils each Monday about their weekend activities. “Most kids went, ‘Well, grandma came over and we had dinner,'” she said. “I said, ‘I watched my mom and dad play poker with a giant, two midgets and a nice guy in a mask.'”