In 2003, SLAM! Wrestling Producer Greg Oliver wrote a piece about the lack of professional wrestlers on the Canadian Walk of Fame. This prompted David Freitas to launch “A Star For Stu” campaign the same year to nominate Stu Hart. Unfortunately, when the names were announced for the class of 2005, Stu’s name was not on the list. 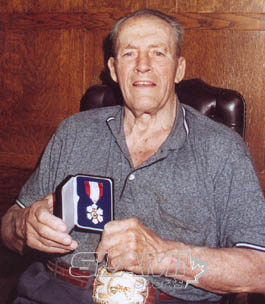 Stu Hart with his Order of Canada. Photo by Bob Leonard

Fast forward six years. The walk now includes names like magician Doug Henning, fashion designers Dean & Dan Caten, model Daria Werbowy, and band Nickelback. While none of those names are undeserving, it remains a mystery why so many people, many relatively unknown or still early in their careers, like Nelly Furtado, are on the walk yet still no wrestlers.

“We pay attention to things like the Star for Stu campaign. We received a lot of nominations for Stu, we are tracking everything and doing the best we can. Lots of people were nominated who deserve to be on the Walk, it is a tough choice to make. We have to look at it like this — it isn’t a case of deciding not to induct Stu, but a decision to induct these people,” Heidi Pyper, Manager of Sponsorships, Communications and Special events for Canada’s Walk of Fame told SLAM! Wrestling in 2005. “Stu Hart is deserving, and wrestling is deserving as it is huge entertainment worldwide. Stu as well as people like ‘Whipper’ Billy Watson are deserving of a star. We are limited by numbers, we can only do a few inductees every year and we will see Stu Hart on that walk for sure someday, it is just a question of when.”

The question of when remains open, with no wrestlers on the walk. It is an easy argument that if Canadians still in the middle of their careers like musicians Jann Arden, Sarah McLachlan, director James Cameron, and comedian Howie Mandel are on the walk that there is a place for Bret Hart, Owen Hart, Edge, and Chris Jericho.

The world has changed a great deal since 2004. The world of social media has been used for good, like getting Betty White to host Saturday Night Live, and evil in creating Rebecca Black. Now is a time to use that social media for another positive — to add Stu Hart to Canada’s Walk of Fame.

There is a Facebook event inviting people to nominate Stu which is receiving positive feedback. You can join and invite others to nominate Stu. You can also go directly to the site and place your nomination. Nominations close at midnight April 30th.

Stu Hart has received the Governor General’s Award, is in the George Tragos/Lou Thesz Professional Wrestling Hall of Fame, and has a deserved place in the WWE Hall of Fame. Based on his accomplishments and influence, in my opinion, he deserves to be the first wrestler on the walk, and hopefully start a trend recognizing some of Canada’s greatest entertainers.