Abdullah the Butcher forks his way to WWE Hall of Fame

Abdullah the Butcher, the hardcore wrestling icon who sadistically stabbed his opponents with a dinner fork, was having a nap when he got the news of his induction into the WWE Hall of Fame. 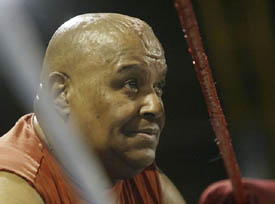 Abdullah the Butcher in 2009. Photo by Darren Brown, Ottawa Sun.

“When they phoned and said, ‘We want to put you in the Hall of Fame,’ I started smacking myself to make sure I was hearing them right,” he says from his home in Atlanta. “It took them a while to get me in to their Hall of Fame, but I’m very happy. Even though I don’t live far away, they’re going to pick me up in a limousine. I love it!”

Hailed as “The Madman from Sudan,” Abdullah the Butcher (born Larry Shreve) grew up in Windsor, Ontario, learning the martial arts of judo and karate before making his wrestling debut in 1958. “Montreal promoter Jack Britton took one look and said of me, ‘He’s a natural,'” Abdullah says with obvious pride. “And the people feared me. At the age of 22, I was packing houses in Montreal.”

Over a half-century later, The Madman from Sudan is confident that he could still pack houses. “If you were to put me with The Undertaker today, we could sell out any place,” he says. “I need a new hip, but I still look 100 per cent good. Hulk Hogan and I wrestled in Japan for two weeks back in the ’80s, selling out and having great matches, and we could do it again today. I think we could still give the people action.”

Abdullah the Butcher would also have a heated rivalry with Andre the Giant, selling out arenas and stadiums in Montreal, Tokyo, and Puerto Rico. “In San Juan, we had a hell of a match,” says Abdullah. “But if Andre and me were to ever have wrestled in New York, we could have drawn the biggest crowds in history.”

It’s never a good sign when Abdullah the Butcher brings out a fork!

Tussling with the likes of Lou Thesz, The Sheik, Terry Funk, Bruiser Brody, and Carlos Colon, Abdullah the Butcher wrestled all over the world, for practically every promotion. “But I’ve never met Vince McMahon Jr.,” says Abdullah. “The WWE were scared of me because I was an outlaw, and I did not kiss anybody’s butt. The boys, back in the day there, would say, ‘Don’t bring Abdullah in — he’ll be trouble.’

“Ric Flair was another one who was scared of me,” he adds. “I fought Ric Flair in Texas before he was the world champion, but he didn’t want anything to do with me after that. Once again, I was a different kind of wrestler, and I wouldn’t kiss Flair’s butt. I could have drawn a lot of money with him, but he didn’t want to wrestle me.”

Abdullah’s bloody and memorable war with Dusty Rhodes, throughout the state of Florida, is a feud that fans still ask him about. “We had barbed-wire matches that were crazy, and the fans loved it,” he says. “They were good matches, but the thing about them is that they’re very dangerous. You make one mistake and you could rip your eyes out of your head, or cut yourself up into pieces.

“I’ve wrestled all over — Kuwait, Korea, Uganda, New Zealand. I enjoyed Australia, the promoter was Jim Barnett, and they had a lot of good wrestlers there, and every night I’d wrestle in front of sell-out crowds.

“Every place I went, it didn’t matter, I could bring business up in the territory. Every country I wrestled in, I could have a great match with their top stars, and I did — all over the world.”

After a long pause, Abdullah opined on a career spanning six decades: “You can’t bring the time back though. I love the wrestling business, and I can still go. I’ll probably die in the ring.

“And there’s so many guys you respect, many of them are gone, you know? When I went to wrestle for Stampede Wrestling, Stu Hart was like a father to me and took very good care of me. I seen all of his sons and daughters grow up, and it was a very nice family. I always cared deeply for Stu Hart, and that dungeon is where all the great stars came out of — right there in Calgary, Alberta. Wrestling was their life.”

Abdullah had this advice for aspiring wrestlers trying to break into the business: “I want all the kids to know that sports should come second, to a good education,” he says. “They have to learn these computers, and make sure they stay in school. And make sure you take care of your mother and father, because they brought you into this world and you need to take care of them.”

Looking forward to the WWE Hall of Fame induction ceremony on April 2, Abdullah says he hopes to reconnect with old friends like Mick Foley, Terry Funk, Big Show and the Undertaker. He also anticipates that fans and wrestlers alike will visit his famous restaurant, Abdullah the Butcher’s House of Ribs, over WrestleMania.

“People who visit my restaurant can take home the forks and ask me to sign them,” he says with a laugh. “Because that’s what the people love — the violence.”