In a 1970 magazine, “The Big K” Stan Kowalski is described as someone who “can hand out the rough stuff and take it as well when the occasion demands.” Forty years later, Kowalski is still handing it out through his generous charity work around his hometown of Minneapolis. 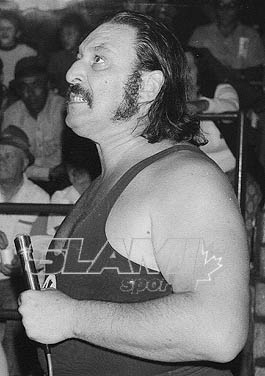 Stan Kowalski looks into the ring during a Stampede Wrestling stint. Photo by Bob Leonard

On April 2nd, Kowalski will be one of many wrestling oldtimers who are throwing their support behind Kenny Jay and his benefit for the Histiocytosis Association of America. Naturally, Kowalski was one of the first to offer up his services to “The Sodbuster” when he first launched the fundraiser 12 years ago.

“Kenny was a great guy and he gave to wrestling. He was wrestling guys that outweighed him by 50, 60 pounds, and he kept coming and he never complained,” said Kowalski. “He didn’t bitch about this or that. He was just one swell guy. He always did the best he could in the ring, and that’s all anybody ever asked — do the best you can.”

Somehow, the 84-year-old Kowalski is managing to fit in the appearance. He goes from fundraiser to speaking engagement to visits in a veterans home to a charity dinner without hardly stopping to pause. In fact, he claims to only sleep three to five hours a night.

Where does he get his energy?

“That’s what everybody asks me. I don’t know!” he said with a laugh. “You just keep going.”

Part of it comes from putting things in perspective. “I see all these guys, and I go to the VA homes, and see these lonely guys there with nothing.”

Kowalski is a World War II veteran himself. “I’m one of the last of a breed that’s fast disappearing.”

Currently he is the state chairman for homeless veterans, and has hopes to turn a warehouse into housing with the right deals. Around town, people know to call Kowalski if they need something, as he’s a scavenger extraordinaire, with a wealth of connections, many dating back to his wrestling days.

Facing many young veterans these days, Kowalski shares an inspirational line that concludes his speeches: “If you were honorably discharged from the military of the United States of America, I care not if you are white, black, red, yellow, or brown skinned, you will forever be my brother.”

Listing Kowalski’s charitable and humanitarian works would be almost as long — and varied — as his list of victims from his 25 years in wrestling.

Besides his work with veterans, he’s been involved in the United Way for half a century, he was Santa Claus at a local school for 15 years, served on a school board, the state boxing commission, the YMCA, a local athletic association, ran with the Olympic torch, organized 9/11 memorials. He also has run, unsuccessfully, for political office. Needless to say, the list goes on.

He was born Bert Smith on May 13, 1926 in Minneapolis, and grew into a 6’2-1/2″, 290-pound man. After wrestling and playing football at North High School, he served in the Navy for three and a half years aboard a submarine in the Pacific during the Second World War.

After the War, he enrolled at the University of Minnesota, and met the local promoter Joe Pazendak who worked out at the University and was an unofficial assistant wrestling coach. “He saw something in me that I guess told him, ‘Hey, why don’t you try being a pro?'” said Kowalski.

Turning down a chance to play football for the Green Bay Packers in 1950, Kowalski turned to pro wrestling, debuting as Buddy Marco for the old NWA promotion run by Tony Stecher in town. “I grew a little beard, put a crew-cut on and tried to pass myself off for an Italian. But I was wrestling as one of the good guys and that was a good prop for it.” 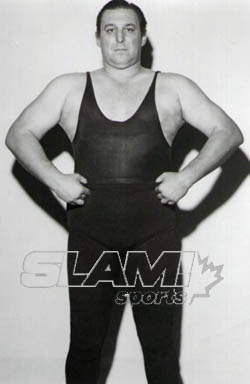 A trip west really helped him grasp the skills needed to be a successful pro.

“I went out to Los Angeles when I was still young and trained with Sandor Szabo. He was a great guy and a great teacher because he took time and he was there with you, showing you. He was right in the ring with you,” he said. “I left him and went out on my own a bit and came back to Minneapolis.

“I wrestled a guy named Stan Matysik. I got friendly with him. He told me, ‘Stan, you’re a good wrestler but you’re never going to make it great because there are too many popular guys out there. Why don’t you try turning the other way, and do it to them before they do it to you?’ That sounded pretty good. I used a few punches and a few kicks and some hair pulling. I started winning matches. That was back in ’52. I started winning matches. Well, this is fun! Then I just kept it up. I never was really a brutal type guy where you rip and tear. I liked to wrestle too.”

Kowalski considered himself a hybrid heel. “I combined them both, and I think that’s what got people really upset because they knew I could wrestle, yet I’d go for the trickery.”

The name change wasn’t that hard, prompted by notorious promoter Jack Pfefer, who was in Boston at the time, and obviously a fan of the Tennessee Williams play A Streetcar Named Desire. “The Tony Marco didn’t fit well. My family name is Kowalski,” he said, addressing his Polish roots. “My grandfather when he hit Ellis Island, he wanted to talk English. He asked somebody, all the Poles there going through Ellis, ‘How do you say Kowalski in English?’ They told him it’s Smith because k-o-w-a-l in Polish is pronounced Koval, which is a person that works with metal, a metal worker or a smith. So they told him Smith. When they called his number and they asked him his name, he said Maximillian Smith. My dad was born under that name, and so was I. Then I went back to the family name.”

Though he also had a stint in Ohio for Al Haft as “Slamming” Sammy Silvers, was Ivan Kola in Amarillo, and was Krippler Karl Kovacs for a tour of the WWWF, it was under Krusher Kowalski (Krusher with a “K” to avoid confusion with “The Crusher” Reggie Lisowski), or, later “The Big K”, that he achieved fame.

Naturally, there was some confusion between Stan Kowalski and Wladek “Killer” Kowalski, from Windsor, Ontario.

“I got into Boston in 1954, and Pfefer started calling me Killer Kowalski, because Wally was around and he was making big noise around New York, and we were in Boston. I was probably the biggest guy that Pfefer had. He did a lot of copycatting. He had a Gorgeous George Grant, he had Nature Boy Buddy Lee. He would take names and get somebody to fill them, and just change the name a little bit. He started calling me Killer Kowalski, but then when I left him and came back to Minnesota, I felt like that really wasn’t a good thing to, and I went to Krusher.” (Both Kowalskis were friendly, and Stan says they went out for dinner a few times.) 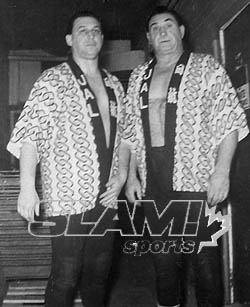 Though he would form noted teams through the years with the likes of Hiro Matsuda in Oklahoma, Kim Duk in Tulsa, Black Jack Daniels in Florida and Texas, Kowalski’s best-known pairing came with Tiny Mills, a veteran who had teamed for years with his brother Al Mills.

“Tiny came in when I was still a prelim guy here. We just kind of hung out. He was there, and I was alone, I wasn’t married or anything yet. We hung out and he rode with me because I knew where to go. We got to be real friendly,” Kowalski recalled of the beginnings of the Murder Incorporated tag team. “He was going to Calgary and he asked me if I wanted to go with him. I said, ‘I’m already booked down in San Francisco. When I’m finished there, I’ll give you a call.’ His brother Al was quitting. Al had something wrong with him. That’s just before Al died, as a matter of fact.”

It was Kowalski that lined up bookings for the new team in Japan, Australia and New Zealand, and asked Mills to join him.

In 1959, they both returned to Minneapolis, which the Alberta-born Mills called home as well.

The team worked well for a decade, despite the 14-year age difference.

“We looked quite a bit alike, long black hair, black tights. I wore a black shirt with a circle K on it though. We just got along fine. In the 10 years we were together, we never had an argument. It just came time when Tiny didn’t want to go, or I wanted to go, so we split.”

After breaking up with Mills, Kowalski put in another dozen years before calling it quits.

They were notable years, since he finally got time on TV to brag and boast.

“The interview was as important as the match itself as far as developing fan interest,” said AWA promoter Verne Gagne in a 2004 profile of Kowalski in the Minneapolis Star-Tribune. “If a guy could talk, it was all the better. If he could wrestle and talk, that was fantastic. The Big K did a great job with the talking.” 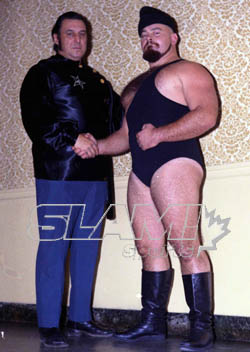 The Big K as the manager of Ivan Koloff in the AWA. Courtesy of the Wrestling Revue Archives

As his career wound down, The Big K became a manager in the AWA for the likes of Shozo Kobayashi and Ivan Koloff.

Being a bad guy suited the really good guy that is Kowalski. “I was a bad guy! I never won any popularity contests,” he said. “I was popularly unpopular. The one thing that I did that most of the bad guys did not do, after the matches when kids wanted autographs, I was very polite to the crowd. I always respected the fact that they were making the money for me by showing up. I was always a gentleman. I always worked to promote pro wrestling, and also to promote good will.” He would even do magic tricks after the show to entertain the kids.

But nothing lasts forever.

“I got to be 50 years old and I wasn’t working out anymore. I got to be heavy. I went on a little tour and I saw I was still able to cut it in the ring but I didn’t look like an athlete anymore. I had a big belly on me. I could still go, but it wasn’t the same. I had a couple little kids with my wife. It was time to settle down,” he said.

“When I quit, I quit. I didn’t want to referee no matches.” 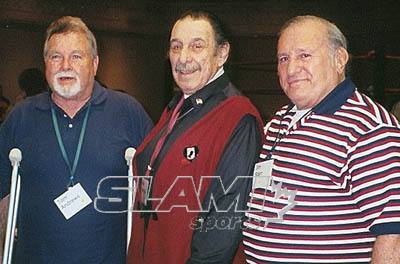 Stan Kowalski, centre, with Tom Andrews and Jim Starr, at a Cauliflower Alley Club reunion around 2003. Photo by Bob Leonard

Though he may have stopped wrestling, Kowalski never stopped moving.

He owned a nightclub with his old tag team partner Blackjack Daniels, and was a union negotiator and business agent for Local 17 of the Hotel & Restaurant union. There was also his brief stint as a police officer while still wrestling part-time.

Married to Cleo since 1961, with a daughter and a son, and numerous grandchildren, Kowalski’s life keeps going forward. He’s not one to stop and reminisce. Even losing nine inches of his colon because of cancer in early 2006 didn’t stop him.

“If I ever quit, I’d probably die. I’ve got to be moving and in to things.”