Blast From The Past: Abdullah the Butcher and The Black Baron

Digging into the archives of writer/photographer Roger Baker, we revisit a Wrestling Revue article from March 1973 on the strange hold that The Black Baron had over Abdullah the Butcher. Check out Roger’s story — which we vet for the kayfabe of the era (in red) — and his amazing photo gallery of Abdullah the Butcher, including a number of great archival photos from Roger’s collection.

Six burly policemen weighing an average of 220 pounds each are standing outside a dressing room which has a sign on the door, in large letters: “Private — Abdullah The Butcher and the Black Baron.” The guards all appear very serious and somewhat uneasy. There is no joking or bantering going on. 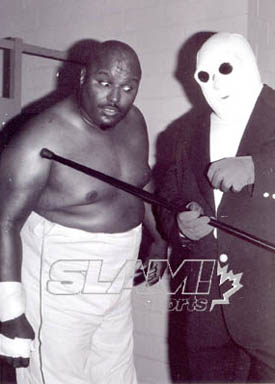 Abdullah the Butcher and the Black Baron. Photos by Roger Baker.

Wrestling promoter and matchmaker Pedro Martinez, who had consented to allow this reporter into the heavily guarded dressing room, had warned: “The Butcher is very unpredictable, and you are taking your own risk going in there.” Mr. Martinez also had emphasized that we could not go in were it not for the fact that the Butcher’s new manager, The Black Baron, has him under control. “Under control, I thought, what am I getting myself into?”

A high-pitched scream comes from within the environs of the dressing room and the sound of heavy furniture being overturned and slammed around is mixed with this hair-raising scream.

A lump is in my throat now, I can’t seem to swallow, my stomach feels like it’s full of cotton. Who needs this kind of action, I think to myself. I could be at the beach, it’s a nice day.

Suddenly, the dressing room door smashes open to reveal a giant, bulking figure of a man. His head is completely bald and displays a patchwork of criss-crossing scars. He is immense, weighing in excess of 300 pounds. His eyes appear glazed and the pupils dilated and they are rolling all around. He looks every inch the ripper and animal he is reputed to be. His shoulder width spans the door of his dressing room. One can actually envision him as an eunuch slave guarding a shiek’s harem. The Black Baron hobbles out a moment later, leaning heavily on a cane and stands in front of the Butcher. He stares steadily at this human monster and mumbles something to him. The Butcher slowly calms down and his eyes no longer roll around his head.

“It’s all right now,” mentions the Black Baron. “He won’t hurt you. I have him under control again. Come into the dressing room with us and I’ll give you the background you need to write your story. Under control now, I say to myself, what happens if he pops out again and clobbers me with a chair. What chance do I have? Said the Baron: The Butcher has had two other managers previously, and turned on them. Both men were hospitalized from injuries inflicted by the man. They could not control him as I do. I have mastered the art of hypnotism and the Butcher is completely under my spell. You just witnessed yourself what I can do with this man. Through hypnotism I can calm him down or turn him into a raging, indestructible human wrecking machine. He is my revenge on wrestling for what it did to me. You see that I can’t get around without the aid of a cane; my right leg and hip have been permanently damaged. A few years ago I was a well-known wrestler and had a wonderful career ahead of me. I was making good money and was known as a scientific-type wrestler in those days. However, my wrestling career was suddenly aborted one night in a small midwestern town. There is a lot of professional jealousy in some wrestlers, and this night I was getting into my car which was parked behind the arena, three wrestlers jumped me. They all wore masks, so I couldn’t identify any of them. They punched and stomped me so badly that my right leg was smashed and my hip joint put permanently out of kilter. I also had seven broken ribs. When I came to, I was in a hospital taped up around the ribs and my leg in traction. Three months I lay there helpless, knowing full well that my career was over, my hopes and dreams shattered. I had a lot of time to think in there and I grew steadily more bitter over what had happened to me. I vowed that someday I’d be back in wrestling, but as a Dr. Frankenstein, having control over a super-human wrecking machine. I discovered hypnotism and pursued it with a fervor. I had heard of the Butcher and knew that he was uncontrollable, also that he had turned on his previous managers.

“I approached him about six months ago and after several meetings since, he consented to allow me to manage him. I control him completely now with my hypnotic power, and every time he injured and defeats another wrestler I feel that I’m gaining revenge for what happened to me. His elbow is the hardest in the world, no man can stand up to it. He has split many heads open with it just like over-ripe watermelons. Johnny Valentine is reputed to have a hard elbow and has beaten many with his so-called brain-buster. If he ever wrestled the Butcher, he will have his elbow shattered if he tries it on the Butcher’s head. It is so hard he could be clubbed over the head with a heavy board and he wouldn’t go down.” Note #1

This statement by the Baron was authenticated about an hour later. The Butcher wrestled Victor Rivera in the Memorial Auditorium ring in what proved to be a blood bath. An enraged Rivera, after being repeatedly fouled by the Butcher, slammed a wooden chair down on his head, full force. The Butcher merely blinked, then Rivera whipped him head first into a turnbuckle. Although the Butcher’s head was cut open, he did not go down from these blows. Rivera went berserk and would not let up and after he decked the referee and Promoter Martinez’s son, Ronnie, who tried to calm him down, several preliminary wrestlers came into the ring to assist. They, too, were promptly knocked down by Rivera. Both men were consequently disqualified. This bout was only one example of how riotous the Butcher’s matches get. A little later we took the Baron and his charge to the Buffalo airport. We left through a side entrance of the building where I had brought my car to pick up the pair.

I will not forget that incident for a long time. There were, maybe, 30 or 40 wrestling fans who had surrounded my car. “Hurry up, get out of here,” ordered the Baron. “They will tear your car apart if you don’t take off.”

During the frantic drive to the airport, the Baron told us that usually they have to be taken by police paddy wagon from the arena for protection from fans. “It only takes one knife thrust or one bullet and it can be all over,” he emphasized. Everywhere the Butcher wrestles there almost always is a riot. “My man is so wild in the ring and out of it that he will do anything to beat an opponent down to defeat.”

In the two matches that I saw the Butcher that was indeed true. Against Mighty Igor, he fouled Igor by hitting him over the head with a steel mike, then strangling him with a cord. He then pulled out a wooden cotton Q-tip out of his pants and repeatedly shoved it up Igor’s nostril. When he wrestled Rivera, he slammed his head on the timekeeper’s bell down on the floor of the auditorium and, not being able to cut him up, promptly began beating his head in an effort to finish the job. Abdullah jabbed Rivera’s eyes with thrusts from his karate thumb. He has an unquenchable thirst for blood, but more often it is his own he tastes as his head breaks open fairly frequently in the course of his matches.

Recently the Butcher and The Sheik wrestled the Rougeau Brothers in the Montreal Ballpark. According to an eyewitness report, it was like Pearl Harbor. All the wrestlers were covered with blood, including the referees and the mat. A riot ensued and dozens of chairs sailed into the ring. Several fans were hospitalized and arrests were made. This carnage drew a record 30,000 fans and a gate well in excess of $100,000.00.

The Butcher wants the NWA title with a passion. Some time back he got a chance at it with a match against Dory Funk Jr., in Calgary, Alberta, in the Corral Arena. After 50 minutes of brutality and blood-letting, Butcher was disqualified but he looked more like a winner than a loser. Funk had to be carried to the dressing room on a stretcher. Men like the great Lou Thesz and Don Leo Jonathan have also felt the might of Abdullah’s elbow and were put out of action for a while. The Butcher has wrestled in every major center in North American, with the exception of New York City. He wants Pedro Morales badly, but they won’t let him in because they feel he is too dangerous.

This year, he defeated Giant Baba in Japan for the All-Asian Championship. A week previous to this interview, Butcher beat Ernie Ladd in Cleveland to win the National Wrestling Federation title and belt. [See SteelBeltWrestling.com’s Abdullah becomes a champion]

Beating black men in the ring gives the Butcher his greatest satisfaction. He has busted open Bobo Brazil a number of times, also, Rocky Johnson. This sounded strange until it was explained that the Butcher is not black himself but Sudanese, being born in Khartoum in the Sudan, where as a boy he had to fight every day for his food to stay alive. Note #2

Abdullah the Butcher almost certainly will one day be known as the greatest villain of all time, a dubious title now held by The Sheik. However, the Butcher is a younger man, perhaps in his mid-thirties. The Sheik has been around a long time. Given a few more years the internationally infamous Butcher has a decided edge over all other villains. He would love to add this honor to his almost full trophy room. Note #3

Roger Baker was a writer and photographer for magazines like The Wrestler, Inside Wrestling, Wrestling Revue, and Boxing Illustrated from 1958 to 1973.  Email him at [email protected]