Read this obituary of Jack Laskin!

“His last creative act was writing this obituary, just to be sure all the facts were there.” That sums up Jack Laskin pretty well. And if you have never heard of the man from Hamilton who spent 10 years as a pro wrestler, well, you’re not alone. But you should take the time to learn about him.

Personally, I got to know Jack on my first trip to Las Vegas for the Cauliflower Alley Club reunion in February 2001. My wife and I had just been married by an Elvis Presley impersonator the day before; the following morning — some honeymoon, hon! — we sat with Jack and his wife Audrey for breakfast. 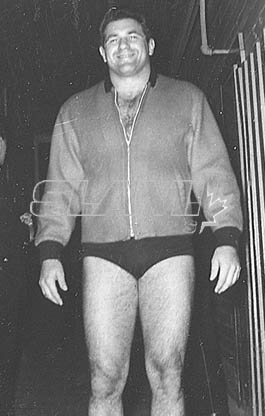 I thought that I knew a lot about Canadian wrestlers, but I had never really heard of Jack. Considering that he also worked as Johnny Leroy, Abe Levinsky, Matt Burns and Peter Wickenoff during his career, much of it overseas, maybe that’s why.

His wrestling story itself, as told in my story in the Canadian Hall of Fame, isn’t all that different than many of the grapplers from Hamilton. Work hard, end up in one of the two gyms where the pros worked out — Al Spittles’ and Jack Wentworth’s — and enter pro wrestling to see the world.

He wasn’t all that colourful, wasn’t a showman, didn’t have a gimmick, and wasn’t, perhaps, all that memorable as a wrestler. He was a step above a carpenter, but not much.

But so what. Without carpenters, there are no stars.

I think it was similar in the rest of his life. People don’t speak badly of Jack Laskin.

They do, however, marvel at his storytelling. It’s not like he was an extrovert, with “look at me” mannerisms when he told his stories either. They sucked you in and had you laughing. He had confidence with his public speaking.

Now, on to the proper obituary part, which Jack thoughtfully provided to The Sacramento Bee:

Jack Laskin has left the world. He will not be returning. Enough is enough! He’s done it all; from the shmatah business to professional wrestling all over the world, then for ten years, a successful Fuller Brush Man, then a salesman, then computer service bureau, then marriage to Audrey, then a collection agency, then a Public Speaker on the “Pro” circuit, then a move to Penryn in 1989, then retirement, then volunteer Jewish Chaplain at Folsom Prison and two major hospitals, then retirement again after he lost Audrey in 2008,and just officiating at weddings and funerals, etc. When he lost Audrey, he lost his best audience and critic. There was no one left to impress. His humor was outdated. His last creative act was writing this obituary, just to be sure all the facts were there. Jack was a member of Temple Or Rishon and doesn’t want any flowers. You want to send flowers, go to somebody else’s funeral. Better you should send a donation to Temple Or Rishon for the building fund or to the heart or cancer fund. Or take some kid and buy them a book and say it’s from me. But you can put your name in it too. Me and you, we did something nice together. Jack was born on March 13, 1929 in Hamilton, Ontario, Canada and is survived by everybody. His last words to one and all: “It’s been a pleasure.” Friends are welcome to attend the funeral Service, Wednesday, December 1, 2010 at 1:00pm at Sunset Lawn Chapel of the Chimes, 4701 Marysville Blvd, Sacramento, CA 95838. Interment Sunset Lawn Memorial Park.

He died Sunday morning, in a care facility, having recently moved from his stepson’s home. He was 81.

The last time I personally talked to him was after Audrey’s death, when I passed on my condolences. I sent him invites to each of our Titans in Toronto dinners, hoping he’d take the chance to return home to see family and some old friends, but it’s a long way from Penryn, California, where they had lived for decades. 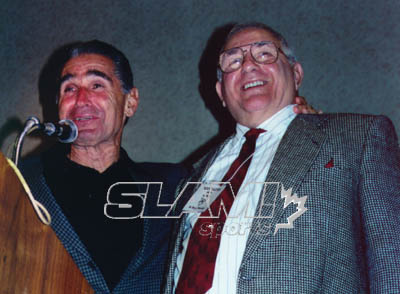 Jack Laskin, right, is introduced by One of the Boys, Seymour Koening, at a Cauliflower Alley Club banquet. Photo by Mike Lano, [email protected]

It’s a shame that Jack didn’t mention his book, One of the Boys (Xlibris Corporation, May 2002), which was loosely based on the play that he wrote of the same name. It’s a great collection of stories from the past, tales that just don’t exist with today’s wrestlers.

Consider this exchange with Tuffy Truesdale, the alligator wrestler with the “biggest thighs I have ever seen on a wrestler.”

I wrestled Tuffy once in Jonesboro, Arkansas. I guess I wasn’t selling it enough so Tuffy turned up the pressure. I almost blacked out as I felt my guts coming out my ears. I gave Tuffy the signal and he loosened up. Back in the dressing room I told Tuffy I was genuinely impressed and if he ever did that to me again I would break his arm. He laughed. “Look kid,” he said, “I appreciate you putting me over. I’ve been in the business a long time and I don’t have much left except the scissors hold. I’ll do the same for you one day.” I know he meant it.

Maybe I’ll go crawl onto the couch and re-read some of his stories again, go back in time, and envision the life he was gifted to have as a professional wrestler. Everything else he did afterward — and there was a lot — was just gravy.