Sara del Rey out to prove she’s ‘Queen of Wrestling’

Being known as “The Queen of Wrestling” must mean that Sara Del Rey is the best female wrestler in the business. Just ask her.

“In wrestling, I am as close to royalty as it comes, so why wouldn’t I be called Queen?” Del Rey queried.

But before Del Rey was Queen of anything, she was a young fan who grew up loving the business. But maybe she loved it a little too much. 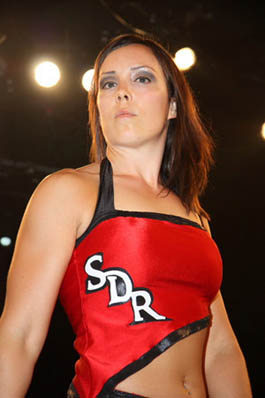 “My first exposure to wrestling was a pay per view in the late ’80s,” Del Rey said. “I don’t remember the pay per view itself, but just getting together with my uncle and cousins to watch. My mom made me stop watching, after Bobby ‘The Brain’ Heenan stole Matilda and I cried and cried and cried. She thought I was taking it way too seriously. I started watching it again in high school with some friends that always got together for Raw.”

Del Rey, whose real name is Sara Amato, grew up in Martinez, California — just north of San Francisco. It was in her senior year of high school when Del Rey was faced with one of the most important decisions in her life, because she would eventually have to choose a career. Wrestling was only an option for her, but at the time, it seemed like the right choice to make.

“After graduating, I tried going to college, but I hated being in a classroom,” Del Rey said. “So I decided to try training while I was young. I never thought I could make a career out of it. I just figured I might as well do something fun, and that I loved, while I tried to figure out my life.”

Her initial training came at the All Pro Wrestling Boot Camp in nearby Hayward, California.

“They were very particular about how stuff was executed, so it was very strict in a way,” Del Rey said. “They taught amateur, takedowns, reversals and tons of basics. And they test you at each stage to make sure you were ready to move on.”

And move on she did. Though she was only a rookie, Del Rey knew that if she wanted to learn as much as possible, that she couldn’t do it in one area. So she quickly packed her things and took off to train in Japan, which was very exciting for her. 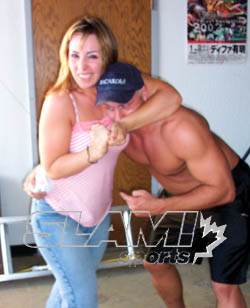 “It was still a time when you were brought places that you didn’t just go, so I felt really lucky and honored when I was asked and jumped on the opportunity,” Del Rey said. “In the U.S., wrestling was on a decline, so most people trained and still had to keep outside jobs. In Japan, the trainees are auditioned and try out for the spots in the dojo, and are paid to be there and train, so they can dedicate everything to it. They train all day, six days a week. Some of the Japanese women really inspired me. Aja Kong is still my hero in wrestling, because she’s awesome and she wrestles like every woman who I think I should be like. I’d say she’s definitely one of the top three greatest women’s wrestlers of all time.”

In between tours, the 5-foot-9, 150-pound Del Rey also competed for the all-female promotion SHIMMER, out of Chicago.

“The all women’s show generally draws a smaller crowd, but the fans are just as passionate about the product,” Del Rey said.

One of her career highlights was a 20-minute time limit draw that she had with Mercedes Martinez in 2005, which received a standing ovation from the SHIMMER audience. And then it was off to Mexico.

“Mexico is a little different, but they have shows almost every day of the week, so they too train and get tons of experience and ring time,” Del Rey said. “Lucha is more fast paced, but really very similar (to Japanese style). I would say the pacing is the biggest difference.” 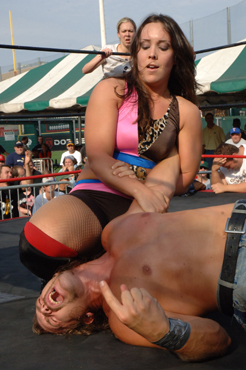 Del Rey competed under a mask in Mexico as The American Angel. She was forced to unmask following a match in Mexico’s Lucha Libre Feminil in December 2005. But that would not be the end for Del Rey, or the mask for that matter, as she wore a mask again in Wrestling Society X. Her ring name at the time was Nic Grimes, and was booked as the sister of Vic Grimes.

Del Rey just turned 30, but it seems like she’s already had a 20-year career. She’s seemingly competed all over the world and remains today as one of professional wrestling’s busy bodies. She still competes in multiple promotions, including SHIMMER in Chicago, Chikara in Philadelphia and Ring of Honor, which includes TV time on HDNet.

“She’s probably the best female wrestler in wrestling today,” Silkin said. “Sara is an athlete, and she can mix it up with anybody. She’s very special in this era.”

For a guy who gave major prominence to some of the rising stars in the big two promotions Silkin knows that great wrestlers are great wrestlers and being one will eventually pay off. So he has already predicted a bright future for Del Rey.

“I don’t want to bash the entire women’s division in pro wrestling, but I think what we see in some of the larger companies, they’re looking for good-looking broads, hot-looking model types, and the wrestling is secondary. I think everyone knows that. But with Ring of Honor, the wrestling is the forefront, and you’ve got to be good, man or woman,” Silkin said. “Sara is putting female wrestling back to what it should be. You always get a really good match from her. Regardless if we have competition for her, she’s good. For the other girls that are breaking into the business that have gravitated towards Ring of Honor, it’s nice to have someone, you consider her a veteran by now. She’s just all around a great talent.”

Del Rey first got noticed in ROH when she had a heated rivalry with Daizee Haze, which culminated in a match that Del Rey won in June 2006. Del Rey later enjoyed success as a tag team with Allison Danger as the Dangerous Angels in both SHIMMER and ROH. She was also part of a faction in ROH called Sweet and Sour Inc., which was managed by Larry Sweeney. 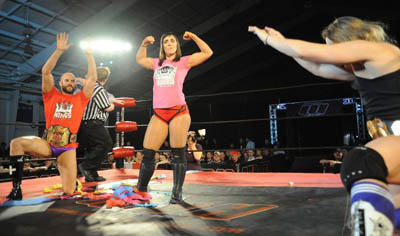 Del Rey currently rules the ROH kingdom with Claudio Castagnoli, Chris Hero and Shane Hagadorn, who are appropriately named “The Kings of Wrestling.”

They say it takes a King to know a King. But in this case, Hero knows that Del Rey is just as deserving of her crown as well.

“Sara Del Rey is to women’s wrestling what the Kings of Wrestling are to the tag team scene. Simply the best,” Hero said. “Her work ethic, integrity and ability to perform, position her alongside the elite in professional wrestling. You can tell when she’s in the ring, regardless of who happens to be sharing the stage with her, man or woman, she owns that ring. Traveling and training with Sara keeps Claudio and I on our toes. She works every bit as hard as anyone else in our field.”

Del Rey seems to be really enjoying life right now. Being in the business that she loves is one thing, but perhaps more important is having an opportunity to work with close friends, who have her utmost respect. And she also really enjoys being Queen.

“I have been managing Chris Hero in ROH for years. So when Claudio and him reunited as ‘The Kings of Wrestling,’ it was just a natural moniker. I think Chris was the first one to call me that (Queen of Wrestling),” Del Rey said. “Being with Chris and Claudio is so much fun. And with Shane as a unit, we just work. So I am enjoying it a lot.”

She has only been pro for nine years, but Del Rey has already added so much to her repertoire. WWE Superstar Daniel Bryan, who had a hand in training Del Rey, utilizes the LeBell Lock, made famous by Gene LeBell, as his submission finisher. And it’s a move that Del Rey also uses on occasion to ware down an opponent. Her other notable finisher is the Royal Butterfly.

The Queen will once again grace the wrestling world with her presence on December 18, which will be the final ROH show of the year, and is appropriately titled “Final Battle 2010.” Del Rey will be positioned across the ring from long-time rival Daizee Haze, who has selected Amazing Kong as her partner in a tag team bout. The only question that remains is who is worthy enough to team with the Queen of Wrestling?

Although it’s hard to say what the future holds for Sara Del Rey, the one thing that can be said for sure is that as long as she has an opportunity to wrestle, she’ll be happy.