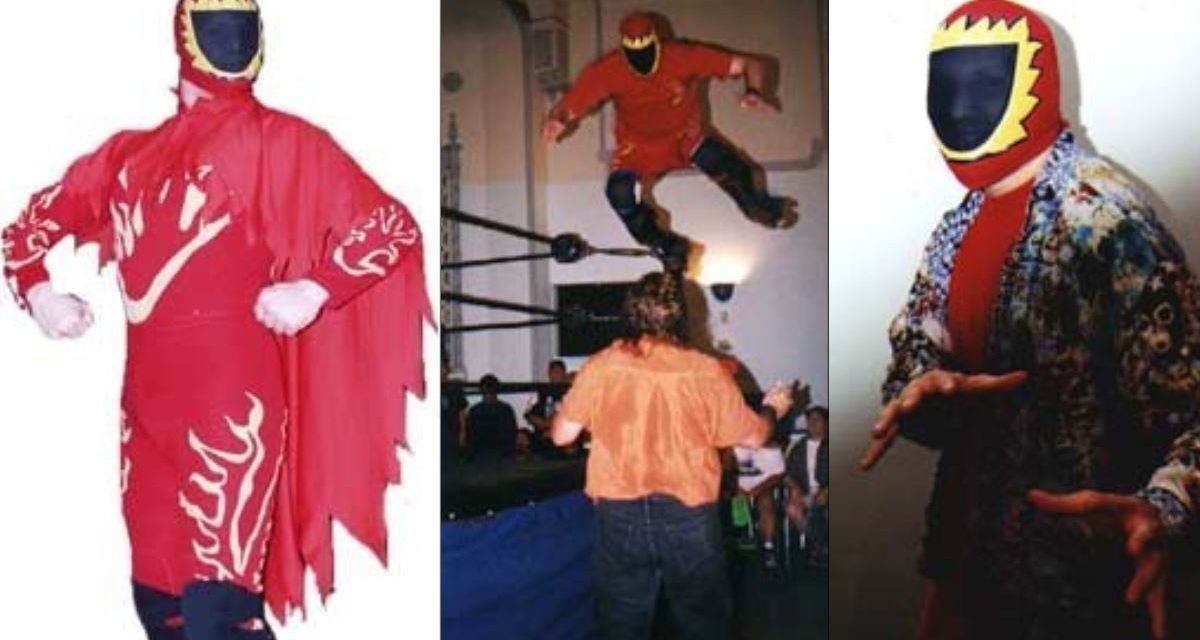 VANCOUVER – Just over a year has passed since the suicide of Adam Dykes, who wrestled as Adam Firestorm and The Torch. A memorial show on Friday keeps his memory alive, as does the Adam Firestorm Memorial Championship Belt, believed to be the only belt of its kind in existence.

The belt, handcrafted and designed by Dave Millican and his expert belt-making team, features a full portrait of Firestorm’s alter-ego, The Torch, his mask, both the New Zealand and Canadian flags as well as the dates of his birth and his passing. It is indeed a rare memorial, definitely a one-of-a-kind creation. 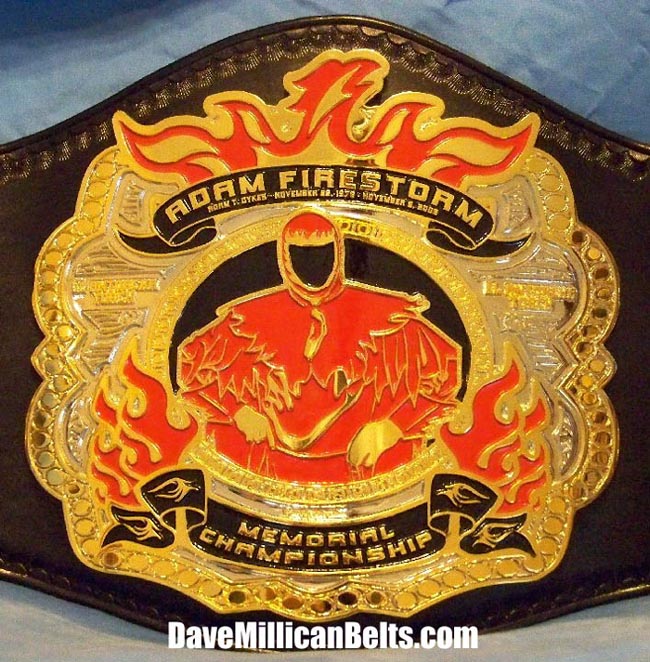 “Memorial Shows are very common; memorial belts are far rarer,” said Rico Mann, who designed the Memorial belt. “The only other one I’ve designed (for the Jeff Peterson Memorial Cup) was never made, and I can’t really think of any others that have. This is a true testament to what Adam meant to his peers and how big of a mark he left in the wrestling business.” 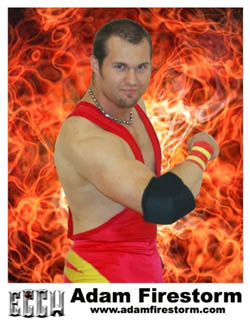 There is no question that Dykes did leave an indelible mark on the wrestling world. The title was the brainchild of John Parlett, a man who is no stranger to the west coast independent wrestling scene and someone who considers himself a 20-year friend of Dykes.

“I met Adam first in 1992 when he was just a kid in school doing a high school project on what was his love: professional wrestling,” Parlett said. “As the announcer then for West Coast Championship Wrestling, I was the one he first approached and I spent hundreds of hours conversing and working with him.”

Like many of Dykes’ family and friends, Parlett could make no sense it when his friend took his own life. Dykes was not someone anyone expected would do something like this so the news hit everyone exceptionally hard.

“Losing Adam was a blow to many people and the way he went was a shock to everyone,” Parlett recalled. “I, for one, will never be able to make sense of it. I know he could have contributed more yet he cut his life short by his own choice for reasons only he knew. How can one make sense of that?”

Dykes’ death haunted Parlett and many others who knew and worked with him. Most tragic was that Dykes left behind a wife and young son. Thomas. As the days passed after Adam’s suicide, Parlett began to wonder how Dykes would be remembered and how his son would be looked after. He came up with an idea to make a memorial belt in tribute to his late friend and run a card where all proceeds raised would go into a fund for Thomas’ education.

He sought out the best belt-maker in the business, Dave Millican, who has been involved in making championship belts for over 20 years. Millican has designed and made belts for WWE, WCW, NWA, TNA, WCCW, UWF, AWA, UFC, WEC, NJPW, Zero1, NOAH, DirecTV and numerous other wrestling, boxing, and MMA promotions. Millican’s company was the only one Parlett wanted involved in the creation of the Firestorm Memorial Championship so he contacted them and asked if they would help.

“Obviously, we were honoured to be involved and shortly thereafter I began working on the design,” Mann said. But this presented a unique challenge, because the customers — in the case, those that knew and loved Adam — had some specific requests. “They had asked that we include an image of the Torch Mask, the Canadian flag, the New Zealand flag, and the name of the title, so I just ran with that general theme.”

Mann, faced with this wish list, began to ponder what to do and how to best reflect the legacy of Firestorm and his wrestling career. “I went with a full portrait because I felt it worked better than just a floating head, and we incorporated flames throughout the rest of the design to tie it all together,” he explained. “I also added Adam’s three working names –Adam Firestorm, El Antorcha, and Torch — to the side plates to remind us all that he had so many personalities.”

The result is a beautiful belt that is as fine a piece of work as Millican’s company has ever created.

Michelle Starr, also a 20-year friend of Dykes, helped put together some of the funds needed to make the belt. He agreed that it was worth the $2,500 it took to make the championship belt a reality and that is indeed a fitting legacy for his late friend.

“The belt is fantastic,” Starr said after seeing it. “Really a true legacy for Adam. And the fact that it is the only belt of its kind just goes to show that Adam was a very special guy. He was a friend to everyone. He wasn’t a typical wrestler. He wasn’t a smoker, wasn’t a drinker or a drug user. He just loved the wrestling business and all the characters and craziness of it all. He lived, breathed and died wrestling.”

It wasn’t an easy task to amass all the funds needed and many people in the wrestling community were involved, giving up precious time and money to make it all happen. “Six months ago it looked like this belt wasn’t going to happen.” Starr said, “but a lot of people came together and we made it happen.” 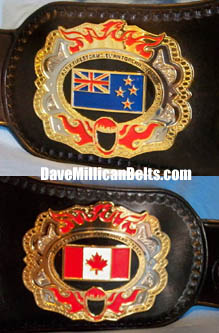 For their part, Millican and Rico Mann offered Parlett and Starr some deep discounts. “Neither of us knew Adam personally, but felt his loss like everyone else in the wrestling community,” Mann confirmed. “When a brother falls, we all feel it. We support the wrestling community at large in many ways. We’re glad we could play a small role in helping to keep the memory of Adam Firestorm/El Antorcha/Torch/Adam Dykes alive, and it is our sincerest hope that the memorial show is hugely successful.”

In many ways, the show already is a success. Many wrestlers who worked with and wrestled Adam Dykes will be at the show. These wrestlers come from the local ECCW and ASW promotions, two wrestling companies where relationships have become a little tense as of late. It is no small thing that workers from both promotions are willing to put aside their differences to help put together this show in honour of a fallen comrade.

“Some of these guys wrestling each other don’t really like each other in the real world,” Starr elaborated. “There is a lot of bad blood there and some bad things have been said about each other but everyone’s putting all that aside for Adam which is a really great thing to see.”

On this same point, Parlett said, “I am so happy that the business has come together for this event and all are donating time and effort for the cause. This show brings together polarized parties for one night to benefit a legacy, a tribute to a man we all respected. We bury the hatchet so to speak for one event to give only from our hearts and show brotherhood for this memorial show. How we behave in the business is a direct reflection whether or not indy wrestling can even survive into the future.” 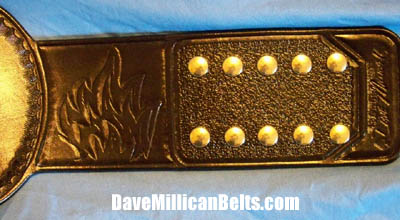 Michelle Starr sees the show — and the memorial belt — as a chance for those were touched by Dykes to come to terms with his passing. “I think some people will be able to get some closure at this show,” he said somberly. “Last year we did a show and it was a very sad night but hopefully this time it will be a happier time, more of a celebration of his life. We hope this show will be a lasting legacy and a chance to remember all the good times we had with Adam and help his son have a brighter future. And this belt we made for Adam is an opportunity to show that he will never be forgotten by the wresting world.”