At the Ring of Honor “Final Battle” show next month, Kevin Steen will take on El Generico in a “Fight Without Honor.” If Steen loses he will quit ROH; if El Generico loses, he will unmask. 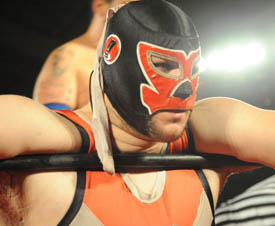 Yet to Steen, it is another step in their intertwined evolution.

“Honestly, I think we can go on forever,” he recently told SLAM! Wrestling. “We have so much history together that I really think we could go on for at least, it’s been lasting more than a year now, I think we have, easily, another year in front of us where we can keep things fresh, keep things interesting and just keep blowing people away. It’s all going to end sometime, and it’s coming in a month at Final Battle.”

In conversation, the 26-year-old Steen stops to do some math in his head.

Aside from WWE Diva Maryse, Steen and El Generico are the two biggest names from Quebec wrestling abroad today.

They both struggled to make a name for themselves in the small bars and night clubs, church basements and recreation halls, that make up the Quebec indy scene.

When they got their shot — together — in 2005, under then-ROH booker Gabe Sapolsky, Steen thought they had blown it.

“We were being brought in, it was just an opportunity. ‘You guys could do well, you guys could do not well. We’ll see.’ We weren’t doing so great for those first few months, for various reasons.

“But I remember when we’d drive back from the shows, we’d tell each other, ‘One day we’ll be tag team champions there.’ It took three years to do it, because we won the tag titles in 2008, but we managed that.

“At the time, it was definitely in our heads that we could get to a bigger stage together, helping each other. Everywhere we went, people saw us as a natural fit, whether as opponents or tag team partners.” 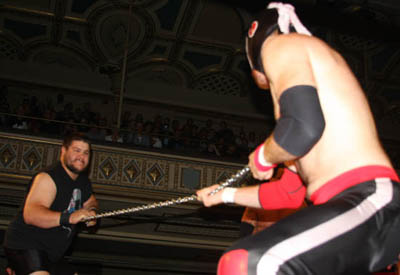 Kevin Steen and El Generico fight for leverage at Ring of Honor’s Glory by Honor on Saturday, September 11, 2010 at the Manhattan Center’s Grand Ballroom in New York City. Photo by Bruno Silveira, www.topropephotography.net

As a team, El Generico and Kevin Steen won the ROH World tag team titles on June 6, 2008, and lost them September 19, 2008. They headlined ROH pay-per-views, a rarity in a world where tag team are rarely featured into the big two of the WWE and TNA. They had a falling out in December 2009, with Steen as the villain.

Steen would love to say that he saw their success coming, but can’t. “I wouldn’t say that seven years ago we thought we’d get to where we are now, but definitely five years ago after starting to wrestle in the States and see what it was all about, seeing that we could go with the top talent here. We saw it as a possibility and we achieved a lot together. As much as I despise him, I can’t help but thank him in a way as well.”

These days, Steen is offering up thanks to another Canadian, Steve Corino (born in Winnipeg, raised in Philadelphia).

“When I heard he was coming back to Ring of Honor, right away I asked to work with him in any capacity that was possible,” Steen admitted. “Turned out he would be my partner, and I literally could not have asked for a better partner. It’s definitely a blessing to work with someone, and under the guidance of someone that you always looked up to like I did with Steve.”

Corino was complementary of Steen as well. “Kevin is just an all-around great guy that gave me the best year of my career,” he said in an email.

Near the end of ECW’s run, Steen got interested in the promotion, which featured Corino in a prominent role.

In 2004, he got a chance to work with Corino in Quebec City. “When the promoter told me I was going to wrestle Steve Corino, I was in heaven. I was really happy, because I remembered Steve from ECW. I hadn’t kept up with any of his stuff in Japan at the time, but I was just psyched to be wrestling a man, a legend like him. We wrestled. He kind of took me under his wing for a little bit. He brought me to Japan after that match, which I always appreciated. But after that, our careers went separate ways. I didn’t see him for several years.”

And now all he has to do is turn around to his corner to see him.