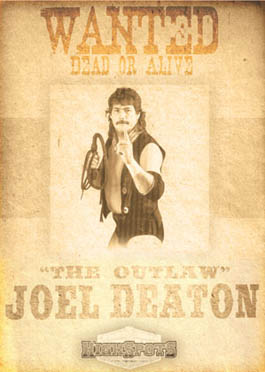 There’s an argument to be made that watching wrestler shoot interviews is one of the most thrilling aspects of the sport. And then there’s the counter argument: that listening to a wrestler talk for an hour is as exciting as watching an Iron Man Match featuring nothing but arm drags. Watching Wanted Dead or Alive: “The Outlaw” Joel Deaton interview DVD proves both arguments true.

At times, Deaton’s stories take you on a roller-coaster ride that is both thrilling and emotional. At others, you struggle to understand what is actually being said and Deaton himself seems a little lost. But there’s no question that the DVD sheds some very interesting light on the era of ’80s wrestling and the cultural divide between North American wrestling and its Japanese counterpart.

Deaton got his start wrestling in 1983, after being trained by Lars Anderson. By ’84, he was more commonly known as Thunderfoot, a masked heel whose specialty was loading his boot with foreign objects and then punting his opponents in the head. He wrestled for several different promotions, most notably Jim Crockett Promotions and also enjoyed quite a bit of success in Japan. He disappeared from the wrestling scene until 2009 where he resurfaced on the Carolina independent scene.

Highspots.com sat down with him to film a 60-minute shoot interview. The DVD of this interview is packaged into several chapters that cover everything from the beginning of his career to his time in Japan. The first chapter deals with his start in the world of pro wrestling where he explains his time training with Lars Anderson and others. What it does not do is explain his reason for getting into the sport. It’s always fascinating to hear wrestlers talk about why they got into wrestling, whether it was seeing Jimmy Snuka jump off the top of a cage or meeting a wrestler in person. If Deaton talked about his rationale for his career choice, it was edited out of the interview which is unfortunate as Deaton does seem like a genuinely regular guy who lived a very irregular life.

Another chapter of the DVD focuses on one crazy night down in Mexico where some friends and Deaton went into a bar and ended up in a fight with 10-15 Mexicans. It’s a hilarious story to be sure, but it takes Deaton nearly 15 minutes to tell it. Not the best use of time, especially when the Deaton’s mind is a treasury of old-school knowledge.

But Deaton is his own guy and does things his way, something he points out a couple of times in the interview. A recurring theme throughout is that Deaton felt many wrestlers got pushes in the industry when they didn’t necessarily deserve it.

“I wasn’t anyone’s uncle, I wasn’t anyone’s cousin, I wasn’t anyone’s brother, I wasn’t anybody’s nothing,” he says at one point in the interview. “I was just me. I didn’t have the pleasure of being pushed or getting a push by guys who would come in and be kin to somebody and because of that, get a push. I worked hard and I did what they told me to do. I loved the business and I wasn’t going to give up and I didn’t give up.”

And it is true in wrestling, as in all professions, it’s not always what you know but who you know that makes all the difference. It was that way in Deaton’s mind and he makes a point to mention this several times. He names two wrestlers who he feels got an undeserved push and then says, “I can name a few more” but then doesn’t. This is the other recurring theme in this interview: often Deaton struggles to remember names and figures in his career, but maybe that’s because there’s two huge lights glaring down on him.

This said, Deaton doesn’t come across as being a bitter, jaded veteran. “If other wrestlers were better than me, I was the first to say it,” he offers during the interview and seems to genuinely mean it. It was a different era back then but not so dissimilar that politics didn’t have a significant impact.

Another chapter in the DVD focuses on a Christmas Day accident Deaton had just when things were starting to go well for him in the wrestling world. Another driver hit him as he was leaving a wrestling venue and, tragically, this driver died. The accident had an impact on Deaton and still does today, although he doesn’t get overly emotional as he tells this story. In fact, this chapter is the DVD’s shortest, a bit of a disappointment as the incident gives us a look into who Deaton really is and was back then but perhaps the event is still to raw for Deaton to want to publicly comment on.

A lot of the DVD focuses on his career in Japan, where he was a pretty big deal, or so he claims. “I was always the underdog,” he says, “I was never a muscle man or a badass but I worked hard and I took good bumps. The people [in Japan] got behind me for some reason, they liked me and they were with me. Whether I wrestled a Japanese wrestler or an American wrestler, they were with me. There wasn’t really any such thing as a heel or a babyface back then, they just wanted to see a good fight. They didn’t care who won or lost; they often cheered the loser. They just appreciated the effort and I tried to give it to them and that’s what kept me a job.”

Five matches are featured on the Outlaw DVD, and, as you might expect, they are all from Japan, which is too bad, as some of Deaton’s matches as Thunderfoot might have been entertaining to watch. Worse, all the commentary during these matches is in Japanese, so it’s hard to learn much from this period of classic wrestling. Still, the matches are decent — Deaton puts on a good match with Yoshiaka Yatsu, a bout that is from Deaton’s first tour in Japan. There is even a tag-team match featuring Deaton and Andre the Giant that is the gem of the entire DVD.

The final chapter on the DVD focuses on a story involving Terry Funk that is pretty hilarious and for those that know or have ever met Funk, totally like him. The story starts out as match between Dory Funk Jr. and Stan Hansen but it sure doesn’t end that way. And it involves a car.

Overall, the Outlaw DVD is a decent offering from Highspots.com and there is more to like than dislike. Still, some opportunities are missed and only a truly dedicated fan will watch every second of every chapter. But the DVD does offer a glimpse into a life that might otherwise have been overlooked and it’s obvious that the interview is a significant moment in his career.

“I was basically nobody in the wrestling world and had no connection to the wrestling world in any way,” he says near the interview’s end. “I’ve been working 33 years now and held over 25 championship belts. I wish I would have had a more lucrative career over here in North America, but I’m proud of what I have done and I am really proud of what I did over in Japan, and what a lot of people never saw.”