The actual induction class is its smallest yet, but one cannot deny that the George Tragos/Lou Thesz Professional Wrestling Hall of Fame Class of 2011 isn’t big — it’s got a stellar NWA World champion from an iconic family and a Gorilla.

The Tragos/Thesz Hall of Fame, at the National Wrestling Hall of Fame Dan Gable Museum in Waterloo, Iowa, announced its Class of 2011 and other award winners today. 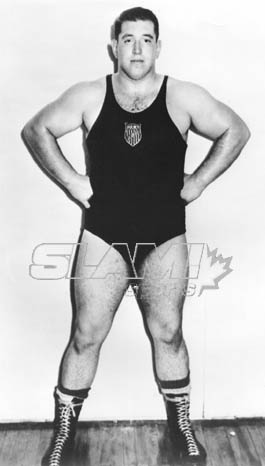 The living inductee is Dory Funk Jr., who will join his father, Dory Funk, Sr., and brother, Terry Funk, in the hall of fame. Dory, Sr. was inducted in 2006 and Terry was inducted in 2010. The Funks will be the first family with three members in the hall of fame. Funk Jr. was NWA World champion from February 11, 1969 (beating Gene Kiniski) to May 24, 1973 (losing to Harley Race). On top of his countless other titles, experience running the Amarillo, Texas, promotion, and booking in numerous locations, Funk Jr. has been a trainer at his Funking Conservatory in Ocala, Florida, and helped many of today’s top stars, including Kurt Angle, Edge, Christopher Daniels and more.

The posthumous inductee is Bob Marella, better known as Gorilla Monsoon. As an amateur wrestler, Marella placed second at the 1959 NCAA tournament for Ithaca College as a heavyweight. Monsoon had a distinguished professional wrestling career that included many titles, including the WWWF (now WWE) United States Tag Team title. He was also known for his successful career as a commentator for the WWE. Monsoon died on Oct. 6, 1999.

“Hacksaw” Jim Duggan will receive the Frank Gotch Award for bringing positive recognition to professional wrestling through work outside the ring. Duggan, a survivor of kidney cancer, has worked with a variety of charities including the Children’s Home Society for underprivileged children, Shiners International, Make-A-Wish, and the Special Olympics. For the past eight years, he has participated in the Variety Kids Telethon.

The Lou Thesz Award, given to an individual in wrestling who has taken the skills of professional wrestling into the realm of public service, will be given to announcer Jim Ross. Service organizations that have benefited from Ross’ contributions include the Support Our Troops initiative, Circle of Champions, and Get R.E.A.L. (Respect, Education, Achievement, Leadership). He has also been involved with Meetings with Children with Life Threatening Illnesses. 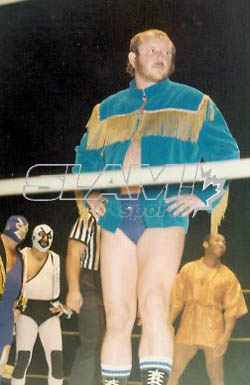 Dory Funk Jr. in 1975 at the Cow Palace in San Francisco. Photo by Mike Lano, WReaLano@aol.com

Scott Teal will receive the Jim Melby Award for excellence in professional wrestling journalism. He is the owner of Crowbar Press and is the webmaster of 1wrestlinglegends.com. Teal has been writing about professional wrestling since 1968. Since that time he has been involved with publishing over 100 books on the subject of professional wrestling. In 2003, he worked on Ole Anderson’s autobiography, Inside Out. Since then, he has published 10 other books, including autobiographies with several high profile wrestlers. Teal is currently working on books with Stan Hansen, Bill De Mott, Van Vader, and editing books on Nikita Koloff (with Bill Murdock) and Ed “Strangler” Lewis (by Steve Yohe).

As well, Pat Miletich, a former Mixed Martial Artist and the founder of Miletich Fighting Systems, will receive the first George Tragos Award. This award is given to an exceptionally competitive wrestler who has adapted his wrestling skills and competitive nature to excel in Mixed Martial Arts.

In a separate announcement, late wrestler Joe Scarpello was announced as a part of the Glen Brand Wrestling Hall of Fame of Iowa Class of 2011. In 1942, Scarpello, a native of Omaha, Nebraska, won the AAU national championship at 165 pounds while still in high school. He later went to the University of Iowa, and nearly made the 1948 Olympic team in freestyle, and did make the team — but did not compete — that same year in Greco-Roman. Scarpello was a pro wrestler from 1950 to around 1975. Scarpello, who died in 1999, was inducted into the Tragos/Thesz Hall of Fame in 2003.

The George Tragos/Lou Thesz Professional Wrestling Hall of Fame weekend will take place on July 22-23, 2011, in Waterloo, Iowa. The weekend includes a celebrity golf tournament, a professional wrestling show, wrestling seminars, a wrestling round table discussion, an autograph signing, and an induction banquet.