In terms of producing wrestling talent, Ontario has nothing to be ashamed of. Many of the industry’s top stars were born, raised, and started their careers here. And though SLAM! Wrestling tries to showcase many of those stars before they hit the big time, sometimes, unfortunately, things just don’t work out. That was the case with Ontario’s own Shawn Spears, who, despite having toiled through the indies and ultimately becoming a WWE superstar (as Gavin Spears), hadn’t been so profiled until now.

“What took you guys so long?” he asked, in mock exasperation, during an exclusive sit-down interview. “I’m coming up on nine years in the business — you should have got me when I was in my prime!”

In all likelihood, though, there will be plenty more opportunities in the future, since Spears (real name Ronnie Arneill) is still as passionate about the sport as when he first started watching it as a kid growing up in Cambridge, Ontario. 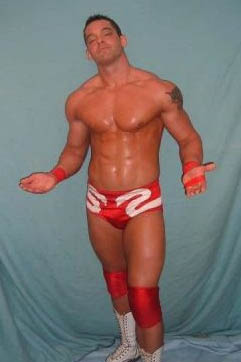 Unlike most fans that grew up in the 1980s (Spears will turn 30 next year), Spears wasn’t a Hulkamaniac. Rather, he tended to back more villainous characters, appreciating how they could garner strong reactions from the crowds in more understated ways.

“Rick Rude, Rick Martel, Mr. Perfect,” he listed as his favourites. “It was great that they could be such jerks, and have thousands of people yelling and screaming every time. They were that good, that they could do something so simple — like while the other guy was down, Martel would flash a huge smile to the crowd, or Rude would start gyrating his hips, or Mr. Perfect would spit out his gum and smack it in the air — but they could get a reaction from the audience every time that they wanted. That, to me, is the fun of pro wrestling.”

To learn how he could be part of that fun, Spears stayed local, joining the WrestlePlex academy under “Showtime” Eric Young. There, Spears learned the ropes through literal hand-on lessons.

“I think one thing missing from many schools today is that a lot of trainers are a little older, and they can’t take all of the bumps that are required to train people properly, they can’t go through everything physically. The thing about Showtime is that he had only four or five guys, and he would teach everyone hands-on, he would get in there and show us things by doing them.”

In addition to classes under Young, two other Ontario-based stars, “Dangerboy” Derek Wylde and Cody Deaner taught Spears the ropes, both in classes and on the road. Spears would often travel with the three of them, and they would help get him booked on shows they were working. The experience was essential to Spears’ development, both in terms of getting the chance to wrestle in front of a wide variety of audiences, and in learning what kind of sacrifices are necessary to be made to pursue a dream.

Eventually, after being pushed by Deaner and two other friends in The Highlanders, Spears sent in a tape that caught the attention of WWE’s developmental scouts, and he was invited to participate in a try-out session in Buffalo.

In total, Spears spent three years in developmental, splitting his time between Ohio Valley Wrestling and Florida Championship Wrestling, before getting the call to join the WWE roster. Billed as Gavin Spears, he wasn’t really given a chance in the company, wrestling only three times before being released from his contract.

“By then, I had spent so much time in developmental, I think that that’s how they saw me — as a talented developmental wrestler. I had a reputation of being very capable and safe, and I had interacted with some of the biggest stars — I had wrestled Matt and Jeff Hardy, John Cena, Randy Orton, CM Punk — but it was all in developmental. So I think I was doomed from the start. It’s not a good sign,” he said wryly, “when you lose your debut match.”

But rather than putting the blame on WWE Creative, Spears is quick to acknowledge that he didn’t do as much as he could have, or should have, to make himself stand out from his peers.

“I wasn’t doing enough to give creative any ideas of where we were going. I wasn’t doing enough on my part to come up with an idea. In my opinion, it’s a two-way street — I give (Creative) an idea and (they) work with me to make it happen. I don’t think there was enough of that on my part. As a talent, you have to do all you can. They’re writing for so many guys, two or three shows a week. You have to give them some ideas. If you give throw in a hundred ideas, they may throw away 99 of them — but that one might be all that you need.”

Despite the outcome, Spears isn’t bitter about his short-lived stint with the company, calling his tenure there an experience he’ll never forget. 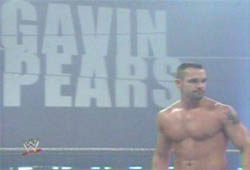 If you blinked, you might have missed Gavin Spears on WWE TV.

“The only thing that was frustrating,” he said, “is that the day before I got released, I broke my hand in the ring. So I had to sit around for 12 weeks without doing anything while it healed. So I couldn’t really capitalize off of any name recognition for that time. Coming off of losing any job, you want to get back to work again right away, but I couldn’t. That was the hardest thing. But, no, not bitter.”

Post-WWE, Spears has gone back on the road, though by no means limiting himself to the Ontario independent scene. He’s had matches with TNA and Ring of Honor, both of which he would be open to working for should the opportunity arise, in addition to companies in Mexico and Puerto Rico.

“I’m having a lot of fun,” he said. “I’ve actually done more post-WWE. I’m having fun. I’m doing matches in the indies, I’m traveling around.”

Which is not to say that he wouldn’t relish the chance to go back to WWE, however.

“Any wrestler who says they don’t want to go back to a major wrestling company is lying to you,” he said plainly.

One potential avenue that Spears finds intriguing is the WWE’s new showcase for developmental talent, NXT.

“I believe if NXT had been around when I was there,” he speculated, “I would definitely have been on it. Probably in the first season, because I had been around in developmental for so long, but definitely by season two. It’s such a great concept. A lot of times it takes guys years before they get the opportunity that NXT gives them.”

If that doesn’t happen, though, Spears isn’t going to give up on his childhood dream.

“Well, if (a) second opportunity (with WWE) comes around, that’s great. But I’m not going to put all my eggs in one basket. Either way, I’m going to continue to wrestle. I’ve also got a couple of other things in the works that I’m putting energy into. I’m doing some commercials, I’m doing some stuntwork. When I was trying to get into WWE, I was so tunnel-visioned that I might have missed open doors. Now I’m trying to keep everything open. Who knows what might come up?”