The ballad of Shillelagh O’Sullivan

It’s not often that a wrestler owes his success to a newspaper columnist. But in the case of Shillelagh O’Sullivan, if it hadn’t have been for Toronto Sun writer Paul Rimstead offering to be his manager, then it’s unlikely that he would have ever made it to Maple Leaf Gardens.

His brief 1973 push at the Gardens became fodder for Rimstead’s columns, and over the years, O’Sullivan was one of the characters that “Rimmer” would revisit for his readers. 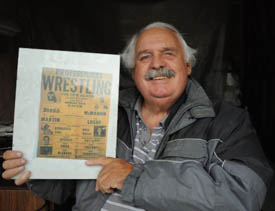 Pat McMahon poses with an old poster in October 2010. Photo by Mike Mastrandrea

“You have to understand that Shillelagh, while he always tried very hard at everything, has never been what you would call a big winner,” Rimstead wrote, looking back, in 1977. “And that includes experiences in the boxing ring, as a wrestler, a stand-up comedian, a poet of sorts, a would-be novelist and many other things.”

But Pat McMahon, the very same Shillelagh O’Sullivan, is not one to sit back and simply laugh at himself.

He’s a proud man from Northern Ireland, who carved out a life for himself, his wife and three kids in Ajax, Ontario, and is still going despite recent battles with diabetes that have cost him a leg and most of his eyesight.

Rimstead loved the lovable losers, insisted McMahon. “Well, I was a better wrestler than he gave me credit for.”

Indeed, hearing McMahon’s story, it’s hard not to agree with him.

Born May 3, 1937 in Newtownbutler, County Fermanagh, Northern Ireland, the 5-foot-9 McMahon spent two years in the Irish Army, and then was drafted by the English Army, where he was on the Irish Guards boxing team, as a light-middleweight, 152 pounds (“that’s a long time ago!” he laughed).

Dispatched to quell an uprising on the island of Cyprus, McMahon was injured. “It was a bomb under a truck, a culvert bomb. It overturned the truck and blew it up in the air. It rolled over, and I hurt my back. It was all bruises and scratches, but it was a back injury, fractured vertabrae… I was sent home to England, and I was in the military hospital for a while until I healed. Actually, I came back good after that.”

After his recovery, McMahon went back to boxing, as an amateur in Ireland and England, then turned professional and had a few fights — five before coming to Canada.

For a Catholic in Northern Ireland, the employment situation in Belfast was really bad. Not only would Protestants discriminate against him because of his religion, but some potential employers believed that his time in the army made him a danger to the state.

Fed up, he packed up his wife and two kids — one would come later in Canada — and immigrated to Canada in 1965, spending 12 years in Toronto before moving to the eastern part of the Greater Toronto Area in Ajax.

Boxing was something he knew, so McMahon trained at Sully Sullivan’s gym on Ossington Ave. in Toronto with owner Earl “Sully” Sullivan.

“Sully wanted to manage me, but he told me he couldn’t give me any money for a couple of years because I had to get my publicity, and that cost money, he said,” recalled McMahon. “So I decided I wasn’t going to box for him. I wasn’t that welcome in his gym after that, you know.” 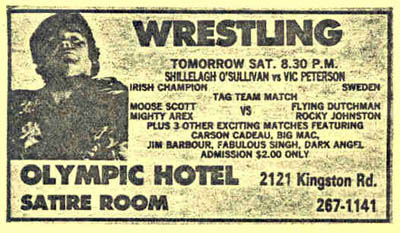 Professional wrestling was another option, so McMahon marched down to the offices of Frank Tunney’s operation, across the street from Maple Leaf Gardens.

“I went down to the wrestling office at the Maple Leaf Gardens, and I told them I wanted to be a professional wrestler. I think they were going to throw me out, actually, as a big fellow came out from behind the desk, and said, ‘Where’d you wrestle before?’ I said, ‘I didn’t. I boxed amateur and pro.’ He took a step back then. He said, ‘Come back down here next Sunday, and we’ll introduce you to somebody.’ So they introduced me to Fred Atkins.”

Atkins said McMahon needed a partner to train with, and McMahon invited Pat “Moose” Scott along. Scott worked for the same construction company as a heavy equipment manager.

They trained for two years, usually once a week on Sundays, at Atkins’ place in Crystal Beach, on the shores of Lake Erie. Each lesson cost them $25.

“He had a mat in his basement, a horsehair mat and that was it – a mat on the concrete floor,” said McMahon. “I had a mat at home in my basement too, so we trained at home, and we trained down at Crystal Beach. John McRae trained with us a lot, and so did Fred Robley.”

Moose Scott said Atkins was tough. “He was from the old school; he was a tough customer. He trained us more or less the way these UFC guys are training now, except for the punching. He was heavily into the wrestling, Greco-Roman and that kind of thing. It was tough training with him, I’ll tell you that. There were a lot of guys who came there who didn’t stick around.”

McMahon concurred. “It was real wrestling that we learned from Fred, you know what I mean? It wasn’t the acrobatic stuff, it was the real stuff. It cost us when we started to wrestle because we were doing the real shoot wrestling. We were doing that and the other guys were surprised, and they didn’t want to work with us because we were too rough with them.

“He trained us like he was trained, I guess. It kind of backfired on us. I think we would have gone a lot further if we hadn’t done it that way.”

The Atkins boys had a reputation.

McMahon begins spinning a yarn about going to see “Bearman” Dave McKigney in Aurora, to line up some wrestling on the summertime shows.

“He was sitting outside on a step doing curls with a weight. I says, ‘I’ve been training for wrestling for a couple of years, and I’m looking for some work. Could you give me some work this summer on your shows?’ He says, ‘Where’d you train?’ I says, ‘I trained with Fred Atkins.’ There was a change in his face, you know what I mean? He says, ‘Okay, come with me.’ There was a big cage out back of the house, and there was a bear in it. So he opens the door to the cage, and he says, ‘Go in there and show me what you can do.’ Well, geez, I was shocked. I said, ‘No, that bear doesn’t know me. He’ll probably kill me. But I’ll tell you what, I’ll wrestle you.’ He wouldn’t wrestle me and he wouldn’t give me any work.”

Atkins hooked McMahon up with Vince McMahon Sr. in New York City, who invited him down, and Pat McMahon, through a friend, got a job in the subway tunnel while he waited for his wrestling date to come up.

On the proper date, Pat McMahon went to the Franklin Park Hotel and the “room was full of wrestlers.” He didn’t get to wrestle, but on the next Madison Square Garden card, he got to escort McMahon Sr. and his big bag of money to the car. That earned him a tryout on the next small tour near Boston.

He rode through New England with two Spanish-speaking wrestlers and an African-American (McMahon couldn’t recall any names). That night in Hyannisport, he went to the ring and realized he was fighting one of his carmates. McMahon hadn’t been smartened up to the business by Atkins. “Of course, nobody said anything about what way it was going to go. He and I went, and I went after him like Atkins showed me. I nailed him. I think it was one minute, 45 seconds, in a small package.”

According to McMahon, despite the initial misstep, he was offered more work.

“I said I’d think about it. So I went home. We talked about it and my wife said, ‘Well, just wrestle around here and get a job.’ I was driving a truck for Wimpy Construction at the time. So I worked at the same time as I wrestled. I didn’t go with any of those big managers. I probably could have gone to Japan and anywhere, but I didn’t.”

Instead, McMahon went to the Brunswick Tavern, a notorious watering hole near Spadina and Bloor in Toronto. He had met an old friend, the Irish singer Don Sullivan, who insisted McMahon come meet his buddy, Sun columnist Rimstead.

“We got together for a few drinks. Well, to be honest, a few more than that,” wrote Rimstead. “The first step was to phone Frank Tunney and his crowd — Tooney’s Loonies, Ted Reeve calls them — and arrange for a rassling engagement.”

This being Rimstead, a man who invited the whole city to the Sun newsroom for a party, it wouldn’t be a simple affair. He conscripted his neighbour, “Christine Adlersparre … a spinster schoolteacher who liked to sew” to create McMahon’s robe.

“She did it in two days over the weekend, and it was a bright emerald green with a lighter green inside and a huge shamrock set on the back, smaller ones on the lapels and cuffs, encircled with shiny silvery material.

“There is no commercial company who could have done the job — no matter how much time they took — as well as Miss Adlersparre.

She even dyed Shillelagh’s boots a brilliant green, plus a pair of my own boots, the only ones that I owned.” 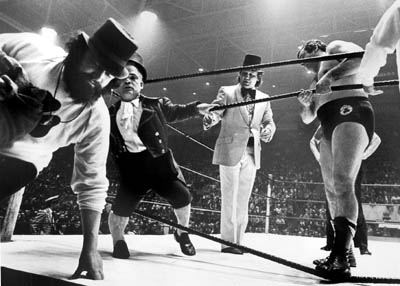 The entourage that headed to the ring at MLG on March 4, 1973 included Rimstead, singer Sullivan, Rimstead buddy Johnny McNamara, and, of course, a leprechaun, in the form of Charlie McDonough, a doorman at the bar at the Inn On The Park. (It turns out that McDonough didn’t like the blood or the crowd, so he was replaced by another little person at the next show.)

Shillelagh O’Sullivan — named after a Bing Crosby song — went to the ring and quickly dispatched his opponent.

“He pinned Johnny Carr, of St. Louis, in just over one minute, without even displaying his patented Leprechaun Nightcap. The big problem was that the bout did not last nearly long enough for people to see what Shillelagh can do,” wrote Rimstead the next day. “The problem, I guess, is that Shillelagh was so anxious to impress people that he went through his entire repertoire of holds, despite the fact that Carr outweighed him by almost 20 pounds, to score his convincing victory.”

O’Sullivan worked five more shows at Maple Leaf Gardens, as well as a few TV tapings, and then disappeared. He was never pinned at MLG, though he lost twice in tag action.

“They were looking for another Whipper Watson,” surmised McMahon. “I guess I didn’t fit the bill.” McMahon also suspects that he was never really in with the right people in the Tunney organization, heading home to his wife and children rather than tearing up the town.

His old buddy Moose Scott thought the Shillelagh O’Sullivan thing could have gone farther. “It was a great gimmick,” Scott said.

McMahon continued to wrestle here and there, promoting as well, until 1980. His old sparring partner Moose Scott promoted many of the shows he worked.

“After the Gardens was over, I didn’t have many matches,” he said. “The dream was over, I guess you could say.”

Besides working in construction for many years, McMahon also tried being a stand-up comedian, wrote a play, Embers on the Phoenix, about a washed-up wrestler from Sudbury that was performed at Pickering’s O’Leary School of Drama in 2000, and has a book coming out in late 2010, Art of Mists of Ireland.

Greg Oliver and photographer Mike Mastrandrea had a lovely trip out to Ajax to conduct this interview, discovering Pat McMahon out for a walk before ever getting to his house. Greg can be emailed at [email protected].