Deviating from script — and pointing it out — he vowed to stay involved in the sport that he loves as long as he can. 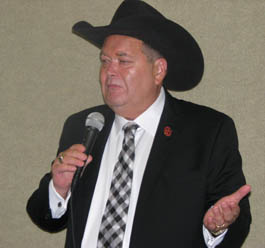 “As far as I am concerned, I have not turned in my jersey,” he swore, alluding to his recent up-and-down relationship with WWE. “I’m always going to be in the hunt.”

Ross detailed his early days growing up in Oklahoma, and his heroes, which included Commerce, Oklahoma’s Mickey Mantle, and Perry, Oklahoma’s Danny Hodge — who was in the room at the Sullivan Brothers Convention Center. He moved onto his beginnings in wrestling, earning $125 a week, driving Leroy McGuirk around the Mid-South territory, setting up the ring, refereeing.

It was in 1974 that he first met Lou Thesz, and Ross shared a story about how generous Thesz was with his time with the newcomer to the wrestling world.

Paying his dues was part of the job description, and he detailed sleeping on the floor with a couple of other wrestlers, and being the go-boy, whether it was getting McGuirk’s cigars and whisky, or changing the channel — a manual job in those days.

“Are you going to say no to Danny Hodge about changing channels?” he asked of the notoriously tough Hodge.

Ross had the audience in the palm of his hand, whether it was talking about seeing the McGuire Twins showering or having seen Kurt Angle take on Brock Lesnar in an impromptu shoot fight.

He ended it the only way he could: “This night has been one hell of a slobberknocker.”

The evening’s emcee, Mick Foley, talked about Monsoon, and the influence he had on the business, from being a monster from Manchuria to being an announcer who made up body parts, to the naming of the Gorilla position, just inside the curtain heading to the ring, in his honor.

“He was a giant in our business,” said Hodge in accepting the posthumous award.

With Funk Jr. in Florida attending a wrestling show, it fell to his younger brother Terry to accept the induction, making the Funks the first with three members in the hall of fame — their father, Dory Sr., was inducted in 2006.

Funk talked about the territories and traveling as a world champion, and praised Junior for making others look good: “My brother was wonderful at that.”

The Frank Gotch Award for work outside pro wrestling went to Hacksaw Jim Duggan for his charitable work. Foley, who received the award last year, joked that it was a “loophole award” for wrestlers like he and Duggan who never had the skills in the ring to enter the hall of fame.

Duggan talked about the sacrifices he has made in the business — including his daughter’s 18th birthday that night — but that the honor meant a lot, especially because it was for his life outside of athletics.

Opening the evening was Scott Teal getting the James C. Melby Award for his contributions to pro wrestling history and journalism, though his work with Crowbar Press, the Whatever Happened To …? newsletter and more.

Pat Miletich received the first George Tragos Award for his efforts in mixed martial arts. The UFC pioneer from Iowa was in Las Vegas the night before doing work as a commentator on Strikeforce. His flight went awry at the airport, and he wasn’t sure he would make it in time.

“If I didn’t get to Waterloo, Iowa to be honored by my childhood idol, there was going to be a security incident,” he recalled, talking about Dan Gable, who presented him the award.

Gable ended the evening, along with Thesz’s widow, Charlie, explaining the challenges facing the hall of fame, which recently was taken over by a bigger entity in Stillwater, Oklahoma.