MONTREAL – T.O.W. seems to have found a winning recipe to attract today’s wrestling fans, as indicated by the 1,500 or so that showed up at the Centre Pierre Charbonneau Friday night.

The recipe is a little like this: Mix in a few of yesterday’s stars, sprinkle in some local strippers and a few Hooters girls, add in many of the best and well known local talents, a pinch of television personalities, pour in the financial backing of many big name sponsors, use Centre Pierre Charbonneau as a venue with great view for all, whether you have a general admission ticket or a VIP table, complete with snack food and lots of free-flowing thirst quenchers, just feet away from the Olympic Stadium and finally have an homage to a world-famous retired Montreal based wrestler. 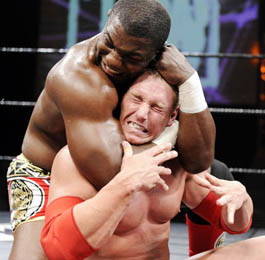 It was the seventh wrestling card for T.O.W. It is the brainchild of three-time WWE tag team champion Sylvain Grenier, along with Marc Blondin and Jean Francois Kelly, all three make up the Reseau Des Sports (Quebec’s version of TSN) weekly TNA French broadcast. The trio saw that many of the smaller wrestling organizations were disappearing. With their marketing strength and exposure and the numerous sponsors, this organization has all the tools to stick around for many years to come.

The evening started off with a high-flying affair between veteran Quebec wrestler Excess against Stupefied who won the battle to the delight of the crowd. That was followed by the Green Phantom against Sebastien Suave which was easily won by the Phantom, who outweighed and outwrestled his opponent by miles. The last preliminary match had Van Hawk winning an excellent lightweight tussle against Mathieu St-Jacques.

T.O.W. has a great tradition of honouring veteran Quebec wrestlers that have had a lengthy international career. After Rick Martel, Gino Brito, Edouard Carpentier and Pat Paterson, it was Paul Leduc’s turn last night as he was introduced by T.O.W. co-owner and acting commissioner Marc Blondin. As a member of the world famous Leduc brother team, with his “brother” Joe Leduc, he definitely marked wrestling history here in Quebec. After his wrestling career, Leduc had his own wrestling organization (FLQ) and trained many of its stars, along with having a column on RDS’s website.

After this emotional homage, the best known local talents and invited big named guests took over the evening. Former WWF tag team champions Demolition took on local heartthrobs Handsome JF and Marvelous Jeff, who came to the ring with three beautiful scantily dressed women, and had an old school match, which isn’t surprising as Demolition are a “tad” slower then their heyday. Demolition took the win in a rather short match to the delight of the older fans in the crowd.

One of the better matches of the evening had Shawn Daivari in a triple threat against Textbook Tyson Dux and Quebec’s fan favorite “Mr Wrestling” Kevin Steen. First, Daivari took the microphone to insult the Montreal fans in Arabic. Then, Dux came in and took the mike to tell the crowd he had no idea what Daivari said, but it was probably to address the numerous fat and ugly Montreal fans. Mr. Wrestling followed by taking the mike and in short telling them he would make them eat their words, which he did in a very hard fought battle, with many turns and triple suplexes from the top rope.

Montreal monster heel Dru Onyx came up in the ring and started talking to the crowd, supposedly out of character and announced that for the only second time in his career, he would be a “good guy” tonight as it was his birthday. As three Hooters girls brought him a birthday cake, he then turned around and plowed the cake in one girl’s face, only to show he was only kidding and could never be a babyface. That’s when Grenier, the veteran of La Resistance, came into the ring to the rescue of the Hooters girls, who were being manhandled by Onyx. Former WWE champion Shelton Benjamin followed by attacking Grenier and then the Hurricane’s theme music came on as he came down to help out Grenier, setting up the later match between the grapplers. 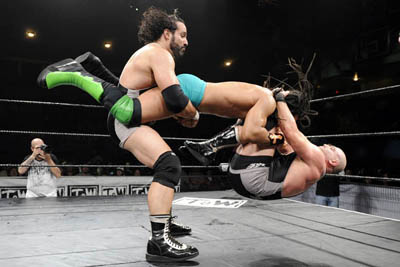 The next match was a six-man tag team bout, with Carl Leduc being introduced first. After ripping the microphone out of announcer J.F. Kelly’s hands, he went on to tell the astounded crowd that he wanted to be known as Carl XL, a way to disown his own family and rich wrestling history. His tag partners then came in, the Flatliners (Matt Burns and Asylum). The team was managed by Paul Rosenburg (a reincarnation of Eddy “The Brain” Creatchman?). Their opponents were Jeremy “The Prophet” Barnoff, crowd favorite Sexxy Eddy and Franky the Mobster, who proceeded to take the microphone and humiliate Carl Leduc. Franky’s mike work is second to none in Quebec, and with his sculpted body and in-ring experience, is easily the most likely to make it to the big leagues (come on WWE and TNA, what are you waiting for to sign him?). This was easily the best match of the evening with a great mix of high flying and non-stop action. But the match ended in a bit of confusion and chaos as Franky was fighting Carl XL up the ramp, with Sexxy Eddy trying to help him, but all the while leaving the Prophet alone in the ring against Flatliners, who after a hard beating took the win. The Prophet was annoyed, to say the least, that Sexxy Eddy left him alone in the ring, and left the ring with a disgusted look in his face, not a good sign especially when you are T.O.W. tag team champions. The next show, T.O.W. 8, scheduled for December 29th, will more than likely resolve that dissention.

Montreal’s famous “barber of the sports stars” Menick was introduced to the crowd and after trying to advertise his business only to be interrupted by commissioner Marc Blondin who told him that since he wasn’t an “official sponsor,” he no right to try and promote his business. Menick then challenged him to a match that both men would have a wrestler represent them in the ring, and the loser would have his head shaved. Commissioner Blondin agreed, and as Menick was walking off the stage, he turned around to tell the crowd that he forgot to mention that the wrestler representing him would be none other than former WWF tag team champion Brutus “The Barber” Beefcake to an astounded Marc Blondin.

The grand finale had Sylvain Grenier and Gregory “Hurricane” Helms pitted against Dru Onyx and Shelton Benjamin. Benjamin, Hurricane and Grenier looked as good, if not better than their days with WWE. A long, hard-fought match that had Hurricane get the win and end the evening in a thunderous applause.

T.O.W. has found itself a growing niche in Quebec wrestling and is on an upward trend in fan base and attendance. The fact that they have numerous quality sponsors, a perfect arena for contact sports (MMA shows and boxing events are held there too) and knowledgeable staff makes for a winning recipe. With all the ingredients in place, could that spell the rebirth of wrestling in Quebec? You can get more information on their website www.towlutte.com.