Card Subject To Change about people, not just wrestlers

The independent wrestling scene has always been a vital forerunner for up and coming wrestlers who use the smaller, less glamorous and non-televised wrestling promotions as a stepping stone in order to gain notoriety and establish their name in the business.

Tim Disbrow’s new film Card Subject To Change aims to show the passion and desire of the men and women who put their body on the line every time they enter the squared circle. 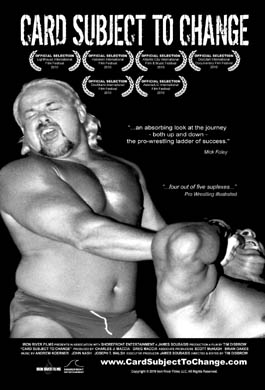 “I just wanted to make a documentary about pro wrestling that was honest, unbiased, and showed it like it really is, Disbrow told SLAM! Wrestling. “A lot of people when they think wrestling, picture The Rock, Hulk Hogan and ‘Stone Cold’ (Steve Austin). These are guys who are world famous and have made a ton of money in the business, but that’s really the smallest percentage of guys.

“There are characters in the wrestling business that the greatest writers in Hollywood couldn’t come up with. The independents are where the story really is. That’s where the characters are, the struggles and the sacrifices.”

The movie, which began filming in 2006, is one of the most revealing and heart rendering feature documentaries that has ever been based on the wrestling industry. The picture features several independent professional wrestlers following them at various stages in their careers.

It is a known fact that wrestlers are not respected in the same way other professional athletes are, in some cases they are doing something that is more dangerous and hazardous to their bodies whilst earning a lot less money.

Card Subject To Change pays real respect to the people who lace up their boots and put their bodies on the line to entertain the fans.

The independent wrestling scene is something that Disbrow has always felt strongly about. When he was younger he wanted to become a wrestler but decided he didn’t have what it took to make it as a professional wrestler. It was in high school when he started to pursue a filmmaking career and after this, he went into film school.

Disbrow was also a former professional referee on the indy scene; this he believes gave him a greater knowledge and a better understanding of what he wanted his film to portray.

“I feel it was easier for me to make this film and get the honest answers I did, because in some cases the wrestlers weren’t as apprehensive around me. I had a history of actually being in the business and I respected the industry, so I wasn’t looked at as an outsider.

“The indies are the place to see real pro wrestling. It’s in your face; it’s up close and personal. You get a chance to interact with the wrestlers and really feel the show.

“Fans watching this film can expect to see what pro wrestling is really like from the other side of the curtain. I hope non-wrestling fans will be surprised by what they see and hopefully come out of the film with a new-found respect for these amazing people and incredible athletes.” 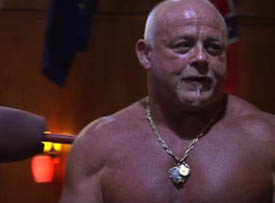 Disbrow chose to interview some of the most legendary names in the wrestling business from Kevin Sullivan to Mick Foley. He feels it was important to get a big perspective from workers all over the business.

“That goes for the entire film, not just the people we interviewed, but the people whose lives we followed. I wanted just the right people to show independent pro wrestling from every possible direction.

“Once we explained the idea and the mission for the film we got nothing but the greatest cooperation from interviewees. We continue to get support from some major players in the wrestling business.

“It really means a lot to me to have veterans and legends support my film.”

Card Subject To Change comes hot on the heels of applauded 2008 feature film The Wrestler, which was the first mainstream movie to approach the sport in a non-farcical way.

The Wrestler movie saw a lot of people come away with a deeper respect for the sport of professional wrestling and this is something that Disbrow hopes can be achieved with his film.

“With The Wrestler being so widely accepted this has definitely opened people up to the world of wrestling, people who otherwise would have brushed it off,” said Disbrow.

“It’s brushed off as a joke or a novelty. People don’t give wrestling or the wrestlers their due. The mainstream sees it as just a ‘fake’ goofy thing. But it’s classic storytelling, I think it’s a shame, but I really don’t know what it would take for the mainstream to give it more respect.”

The film is currently being screened at film festivals all across the U.S. Disbrow believes that the best part of a screening is showing the movie to people that aren’t wrestling fans; he does admit however that it has been hard for the film to be accepted by some individuals at the festivals.

“They are 100% subjective,” Disbrow explained. “It is totally up to the people watching the film to decide if it gets into their festival or not. I can tell you we got a bunch of responses that weren’t positive.

“This film is very raw and at times disturbing. I’ll never really know why they didn’t choose to screen the film. But I would imagine that people’s view of pro wrestling may have played a role in some people’s decision.”

Making the film easily approachable to everyone and not just wrestling fans is something that Disbrow went out of his way to achieve when filming the movie.

Card Subject To Change has achieved a lot of success since being released at film festivals and Disbrow is hopeful that the film can enjoy even more success in the coming months.

“We have a bit of a buzz in both Canada and the UK at the moment. We get dozens of emails every week from all over the world and I really cannot say thank you enough to all the fans out there that are interested in our film.

“I would just like to add that my film really isn’t about wrestling, it’s about people.

“I think that if you can watch it and forget whatever preconceived notions you might have about pro wrestling, then you can really be moved by the people’s stories, their sacrifices and struggles.”