Like many kids in Hamilton, Ontario, in the 1940s, Herb Larson, who recently died at the age of 83, was intrigued by the combination of the wrestling ring over the Hamilton Municipal Pool.

“In Hamilton, they used to have a ring, we all used to swim then they would come down and put the ring up in the pool. We were kids, fooling around. We got to where we liked it and we went from there,” Larson recalled in 2004. 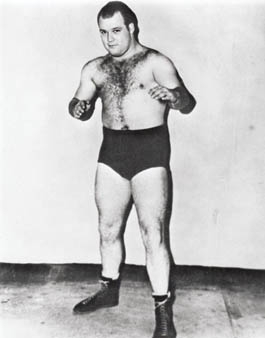 Larson’s older brother, George, who died in 2008 at 94, would be inspired by the pool and the wrestling, becoming an Olympic swimmer and pro wrestler. Two other Larson brothers, Lloyd and Chuck, just dabbled in amateur wrestling.

“George and I learned from watching. We learned ourselves,” Herb described, figuring that he debuted as a pro wrestler himself at the age of 19, working around Hamilton to start. George Scott remembered working out on the mats with Larson, who was two years his senior, at the local YMCA.

Like many locals, the 6-foot, 250-pound Herb Larson wasn’t destined for the main events in his hometown, so he hit the road.

“I did all my work here in the States,” he said. “You get out and you get into the territories. They check you out, people talk to you, talk for you, then you go into a different territory. You go from there.”

He started naming off places he worked: New York, Washington, Pittsburgh, Miami, North Carolina. Larson said he had no favorite place: “I liked New York. Not one particular spot. Miami was nice.”

Herb was profiled in the April 1952 edition of NWA Official Wrestling, under the heading “Operatic Matman.”

The story said that he wanted to be a singer as a kid, and in school he excelled at hockey, wrestling and football. Even while wrestling, he said he was taking singing lessons.

“Right now it is neck and neck as to which career is progressing more rapidly,” reads the story. “While Herb has begun to show real promise as an operatic contender, he has gone even further on the mat. His fast, scientific style has made him an overnight sensation in wrestling arenas and on television.”

Needless to say, the advance billing wasn’t always accurate (this one sure isn’t), though did perhaps help sell tickets. A February 1963 story from Kingsport, Tennessee, brings up Canada’s most famous wrestling export. “Larson, who recently defeated Whipper Bill Watson at the Maple Leaf Gardens at Toronto Canada, is a top favorite among local fans. Herb tips the scales at 233 pounds, but has proven to the astonishment of opponents that he can move with exceptional speed for his size.” 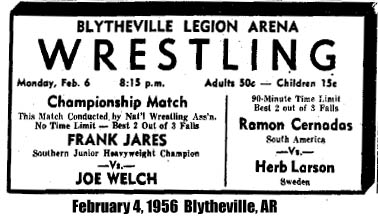 Larson was hardly a braggart and never really a main eventer. One notable run was in the Gulf Coast territory, under a mask as The Proud Rebel. Like many Canucks competing in the southern U.S., he was billed as a “Canadian lumberjack” on occasion. Perhaps he was more exotic: A 1956 promo for a show in Blytheville, Arkansas bills Larson from Sweden.

“I had a good career out of it. I made a little money,” he confessed. “I didn’t have no title runs.” (Promotional bumpf would sometimes bill him as a “former Canadian champion.”)

He was profiled in a feature story in the Kingsport Times-News in 1963, where it was said that “Larson looks and talks more like a well-fed businessman than a person who makes his living bouncing an opponent’s head on a mat.” 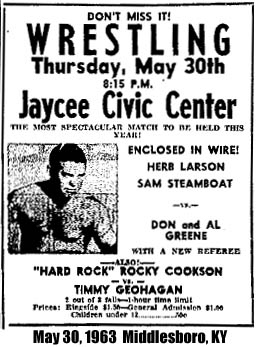 At the time, he’d been wrestling for 16 years. “I wouldn’t trade wrestling for any other kind of living,” Larson said in the article, sharing a tale of fan hijinks. “The closest call I ever had was from a fan. We were wrestling near the edge of the ring and I saw this little old lady come up. Before I knew what happened she hit me over the head with a big handbag. I was out for a couple of hours. I found out later that she was swinging at the other wrestler. I never found out what she had in that bag — but it felt like lead,” said Larson. “Now when I see a little old lady come near the ring with a handbag, I get the heck out of the way.”

Veteran woman wrestler Sylvia Hackney knew Larson pretty well. “When I first broke into the business in the Tennessee territory, Herb was working there at the time,” she recalled. “Herb didn’t like to take people with him to the towns because he wanted to leave right after he wrestled. One day, Nick (Gulas) set it up for Herb to take me to Bowling Green. We were wrestling at a fair. I was scheduled to wrestle after Herb. Herb had his match and left. He forgot about hauling me. I had to find another ride. We became good friends after that, though.”

Tennessee is the territory most associated with Larson, said Frank Morrell. “Herb was with Roy Welch and Nick Gulas for a long time. … He also worked as Elmer the Rocket for Jack Pfefer and Buddy Lee,” he said. “One of the most famous stories of the Tennessee territory was when Herb burned a cross in Nick Gulas’ yard. I don’t remember the details, but he must have been mad about a payoff or something. From then on, Nick hired guards to patrol his property.”

During his career, which ran into the late 1970s, Herb figured he only teamed with his brother George — who worked primarily as Irish Tom Collins to protect his “day job” as a police officer in Hamilton — on a couple of occasions.

Just before his 90th birthday, George Larson shared some of his memories. He was proud of his little brother. “He was a hell of a good, little wrestler,” he said. “We were quite surprised that he was going to go on the circuit.”

While Herb Larson’s name was never top of the marquee, he became well known around Nashville, where he married Beverly and ran the Flamingo Lounge just off the main strip in Nashville for 40 years. “Something I got into, and it just went on from there,” he said. “I like Nashville. That’s where I settled down and got married.”

The Flamingo has a rich history, said Morell. “The Flamingo has been owned by wrestlers for more than 60 years. The first one to own it was Firpo Zbyszko. He sold it to Steve Kovacs and a man named Harold Cooper, who in turn sold it to Herb and Beverly. They were actually leasing the building, which was owned by a man called ‘Pappy,’ but Herb bought the building when Pappy died. He also bought the Lee Motel at that time, the motel where most of the boys stayed when they were in Tennessee.”

“I worked for Herb and Beverly at the Flamingo Lounge for several years,” said Hackney. “The boys used to go there a lot. I remember Nick Adams bringing his bear into the lounge. The bear would sit at the bar and drink bottles of beer. They still have old pictures of the wrestlers on the wall of the Flamingo.”

Morrell brought up Larson’s charity. “Most people don’t know this, but Herb took care of Frank Hickey during the last ten years or so of Frank’s life. Frank wasn’t making any money, so Herb let him live at the Lee Motel and gave him money each week. The people next door at the barbeque restaurant fed Frank.”

Services for Herb Larson will be Monday, September 6, 2010, at Spring Hill Cemetery in Madison, Tennessee.

— with files from Scott Teal