No Surrender: Angle and Hardy steal the show

TNA’s No Surrender comes to you live from The Impact Zone in Orlando, Florida. There is a duel theme to this evening’s pay-per-view focusing on the world title tournament and EV2 taking on Fortune. Hulk Hogan is not in attendance as he is recovering from an apparent back injury and will we ever find out anymore on the secrets that the Nash/Sting pairing claim they possess? The crowd is on fire and the stakes are high so let’s get to the report!

We are told that the duo of Wolfe and Magnus cannot attend the pay-per-view due to personal issues so the team that took The Motor City Machine Guns to the limit last week will get a shot at gold…Generation ME.

Generation ME (aka Hardy Boyz version 2) match speed and agility with the champs and work the double team effectively versus Shelley. The freshly hair cut Sabin turns the tide with Shelley sinking in an innovative rocking horse/reverse Boston crab type manoeuvre. The theme of the match is high spots, which are impressive, but the action takes a better flow once things slow down on the ground. Max and Jeremy are so creative with their offense that I don’t think there are names for most of the moves! Jeremy is on the wrong side of a double side-kick from the champions leaving Max open for the Skull and Bones finisher.

Following the bell Generation ME jump the tag title holders from behind and the “you suck” chants are heard loud and clear through the Impact Zone. The brothers continue to work over Shelley’s injured neck that was a focus throughout with a double DDT to the floor. A good fast paced opener that really got the Orlando crowd energized. 2.5 out of 5

The homicidal, suicidal Sabu looks aged and slow on his walk down the ramp, but let’s see what this grizzled old dog has left in him. Surprisingly Sabu is the one working the ground game and frustrates the champ early. Sabu locks on the camel clutch and once Williams escapes he follows it up with a somersault to the outside. The challenger bumbles a top rope flying head scissors, however, he gets the crowd back by using a set up chair as a springboard to a second rope moonsault for a near fall. Williams finally begins to show why he’s holding gold by slowing the pace and punishing the ECW alumni.

Sabu lays out Williams on a table outside the ring, but crashes and burns with his somersault through that same table. With referee Hebner knocked down for a moment, Williams capitalizes and clocks Sabu with the title belt, picking up the three count. Sabu definitely showed his age tonight and kudos to Williams for having his working boots on to make this one look half decent.

The Knockout division is so well done in TNA and this angle continues to be entertaining. Tara is an immediate distraction to Velvet that allowed Madison to grab control. The challenger rolls up Rayne, however, Tara becomes involved again, this time by distracting the referee. A third time Tara interferes and this finally brings Angelina Love to the aid of her partner to avoid a motorcycle helmet shot. Velvet recovers to connect with a solid DDT for the 1-2-3. The match looked a little sloppy, but not bad overall.

Rhino does not wait for Abyss to get to the ring, attacking him on the ramp. The War Machine wastes no time getting the plunder out from underneath the squared circle. The two behemoths make their way into the parking lot where they pummel each other into fences, trash cans, and cement walls. Action spills back into the arena and seem content to beat the holy hell out of one another anywhere, including underneath the entry stage! Rhino’s gore attempt is stifled by The Monster delivering a choke slam on top of a garbage pail. Abyss decides to go get Janice (a nail infested 2×4) instead of going for the cover, and pays the price by getting gored for a count of two. Rhino then kicks out of Abyss’ finisher, the Black Hole Slam. The Monster had set up one of the crowd steel barriers against a turnbuckle earlier and is able to catch Rhino in a second Black Hole Slam once his opponent went head first into the steel. This one had a nice classic ECW feel to it.

Sting is in his red face paint and comes down to the old n.W.o. Wolfpac music with his partner Nash. Big Sexy takes it to Jarrett with a sidewalk slam and heavy knees in the corner. Announcers Taz and Tenay try to make sense of the vague references of Nash and Sting to telling us “the truth.” Samoa Joe receives the hot tag for his first action of the night and cleans house. With the referee tending to Joe and Nash on the outside, Jarrett nails Sting with Sting’s baseball bat when he went for a Stinger Splash. Joe then rushed in as the legal man to choke out the fallen Stinger to steal the win for his team. A surprisingly quick match.

WINNER: Jeff Jarrett and Samoa Joe
RATING: 3 out of 5

Although the ECW angle has been done before and the freshness is gone this is still a passionate angle that has some legs. Styles’ ambush attempt does not fool Dreamer in this sure to be bloody affair. These two are working stiff and a couple of submissions prove fruitless for Dreamer. The plunder eventually appears in the form of a stage light that is used to clunk Styles over the skull and cord wrapped around his neck. The Innovator of Violence works over Styles’ shoulder in various ways courtesy of a steel chair. The Prince of Phenomenal goes for the old fork stab to the forehead, but is thwarted with more punishment to his shoulder. Styles turns the tide by focusing on Dreamer’s left leg via a pair of figure fours and wrenching it with a chair.

The live audience chants “use the fork” to Tommy, who obliges, but gets hit with a Pele kick for his trouble. Classic ECW kendo stick time is up next, which includes a crossface with the kendo stick! AJ seems to be carrying a full set of forks tonight as he pulls another one out of his tights and stabs Tommy in the eye with it. Styles goes back and digs the fork into Dreamer’s eye that causes him to scream the words “I Quit”. 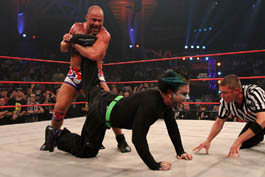 If Kurt Angle loses this or any singles match he claims that he will retire. I’m going out on a limb to say that if Angle does lose before winning the world title it will be next month at Bound For Glory and not in the semi-finals this evening. Hardy out wrestles Angle to start off with a headlock and generally slows the pace. The gold medalist unleashes a ferocious snap powerbomb that bounces Jeff’s head off the mat. Angle wears down the neck of Hardy and scores a near fall after he belly-to-belly suplexes his foe off the top turnbuckle. Second swanton attempt is not successful either as he misses and Kurt grabs another two count. Angle shows frustration in not being able to put away Jeff and finds nothing but canvas on his top rope moonsault attempt. What a war this is! Hardy nails a nasty swanton off of the top to his opponent on the outside. Following that move Taz gives the quote of the night, “Jesus Christmas!”

Angle somehow is able to recover and connects with a frog splash from up high. The crowd rightly yells, “this is awesome.” Why is this not the main event? Hardy cannot put Kurt away with a Twist of Fate and fails yet again with not one, but two swanton bombs. Third time swanton is not the charm for The Charismatic Enigma as Angle gets the knees up. Now it is Kurt’s turn to be frustrated as an Angle Slam is unable to keep Hardy down. Jeff kicks out of a long ankle lock, but the ruthless Olympian goes right back to the submission manoeuvre. With the ankle lock still on the referee has the bell rang due to the 20 minute time limit being reached. Eric Bischoff comes from the back and slaps on another five minutes to the clock. This is reminiscent of the Bret Hart/Shawn Michaels world title match where Bret had Shawn in a Sharpshooter when time expired only to have it restarted and HBK grab the victory. Jeff is able to take advantage of the short break, however, his injured ankle does not allow him to climb the ropes quick enough. Kurt rushes up to deliver a top turnbuckle Angle Slam for a count of two. Time expires on the five minute overtime and Bischoff declares an additional five minutes be added. Angle’s forehead is busted open from having his skull banged on the steel steps numerous times, and comes to close to tapping out in a Boston crab. Kurt slaps on the ankle lock deeply as time ticks down in double overtime. Time expires again and Bischoff calls out trainers to examine the deep gash on Angle’s forehead. He declares that the cut is too deep for Kurt to continue and the match is declared a no-contest. I’m thinking triple threat world title tournament final at Bound For Glory. If the Anderson vs. Pope semi-final tops this all out war I will eat my shirt.

This main event is suffering from crowd burnout early on as the true last match should have been the one before it of Angle vs. Hardy. It is nice that TNA is pushing some newer talent like The Pope though in a main event slot. Pope hones in on Anderson’s left arm, but recovers and delivers a methodical attack. The two semi-finalists exchange working over the other’s arms with Pope fighting off a superplex effort and hits a cross body splash to Anderson on the outside. The Pope connects with his version of Chris Jericho’s Code Breaker for a near fall and nearly stays down after Anderson smacks him down with The Mic Check. Pope misses his go at the DDE and Mr. Anderson is able to drop his foe with a second Mic Check. Ken Anderson advances to Bound For Glory and a spot in the world championship tournament finals. Following the bell Anderson does his mic schtick and announces himself the winner. This one just did not have a big match feel to it.