There was a time when swimming and wrestling mixed in Hamilton, Ontario, when the ring was set up on planks over top of the Municipal Pool. And no one epitomized this strange confluence of cultures better than “Irish” Tom Collins, a pro wrestler who was a Canadian Olympic swimmer in the 1932 and 1936 Games under his real name of George Larson. About to turn 90 on October 28th, Larson shared his fascinating story with SLAM! Wrestling. 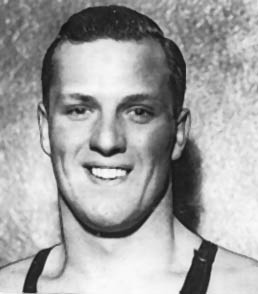 Born October 28, 1914 in Hamilton, Larson did a lot of amateur wrestling at the YMCA growing up, and dreamed of being a football player for the old Hamilton Tigers. When he was 13 or 14, he decided to take swimming lessons. He picked that up very quickly, with his big arms like oars and attention to deep breathing.

His swimming accomplishments came quickly, including a Canadian 100-yard championship in 1932. That led to him being a part of the 1932 Canadian Olympic team in Los Angeles as a freestyler in the 100 and as the anchor for the 4×100 relay team. In 1934, he won a gold medal as part of Canada’s 800-yard freestyle relay entry at the British Empire Games in London. In 1935, the 4×100 relay team he anchored — Pirie-Gazelle-Burleigh-Larson — set a world record. In 1936, he went to Berlin for the Olympics believing he had what it took to win, but he didn’t even make it out of the first heat in the 100.

“My swimming career reached a climax when I had a kidney out. I had cancer of the kidney. That was in 1937. That sort of dampened my aspirations. Then I got back into swimming again and I did pretty well,” Larson told SLAM! Wrestling. He thought 1940 might be his big year at the Olympics. “But war had broken out and that was the end of that nonsense.”

Larson was a total, all-around athlete. “I was pretty well coordinated as far as athletics was concerned. I seemed to pick it up pretty easy,” he said. Larson competed in a few track events, and field events like javelin, caber toss, and running broad jump/triple jump, as well as baseball. He played for the Hamilton Tigers in the forerunner of the Canadian Football League, and as he grew both in age and in size, his position changed from guard to fullback to lineman. After a few seasons off, he played four years for the Hamilton Wildcats. (The Wildcats and Tigers would merge to form today’s Tiger-Cats.)

His fame did indeed precede him around Hamilton, and it got him solid employment during the Depression. “I walked in one day to see the chief of police… ‘I’m George Larson. I want a job on the police force.’ Three weeks later I was on the job. Of course, I got a hell of a lot of good press from the old-time sports writers.'”

During the War, he worked for the police rounding up aliens. “It was very sad, especially with the Italians. I was assigned with an old lieutenant-colonel from the First World War who was on the police department, and we both went around to different places. We had warrants to inter different people.” Larson recalled one arrest, where an old Italian man was repairing his shoes in his yard on a tree stump when they came for him. “We had to take him out of the backyard, put his hat on, and away we went. No goodbye kiss or anything else.” Six months later, Larson and the police realized it was a case of mistaken identity and the father had the same name as the son, who was active in the Italian Club and Larson brought him in too.

At 6-foot, 230 pounds, he was a beefy officer and found some competition a little more to his liking to supplement his income-pro wrestling.

“I was one of the best carpenters in the business,” he said of his career, which spanned 15 or so years and consisted of a lot of wins for his opponents. It’s a real skill to make others look good, and Larson had it.

He and his brother Herb Larson (who would also go pro) used to work out at the Municipal Pool in Hamilton, where they had wrestling matches every Tuesday night, with the ring strategically placed on boards in the centre of the pool, allowing fans to watch from the gallery. Ernie Bickerton took a liking to him. “He was an old-timer, he had ears on him like a couple of cauliflowers. He wrestled under the name of Ernie Powers. I was working out with my brothers at the swimming pool, and they erected the ring there. I was showing my kid brother some of the amateur moves and Ernie Bickerton — Ernie Powers we called him — he was sitting, watching because they had the ring set up in the middle of the swimming pool. He was watching and he got talking to me. He asked me if I was ever interested in wrestling professional.

“He started to train me to a little higher level. He started showing me some of the intricate moves that they made,” Larson explained. “He stuck to the fundamentals of wrestling-go-behinds, takedowns, spread-eagles and the whole bit, hiplocks, headlocks.”

Larson’s first match was in Buffalo, against Warren Bockwinkel during the War. “They were quite interested in watching me. They wondered how long I’d been working. I said, ‘This is my first match.’ ‘Well, they never told us that.’ The booking in Buffalo was put through the office in Maple Leaf Gardens.”

Shortly thereafter, he ran into some trouble with his “real” job. “The chief of police found out that I was doing that on the side. He sent two officers down to watch it. They brought me up before the police commission for taking part in wrestling. … I was suspended for about six weeks with pay.” The irony for Larson is that it was perfectly acceptable for him to moonlight as a football player-they were the real men around town-but not be a pro wrestler.

A friendly magistrate suggested a name change, and “Irish” Tom Collins was born. He was a part-timer his whole wrestling career. “I was pretty lucky. I hit the circuit around Hamilton, Buffalo, Toronto, Montreal. I went away on my holidays to St. Louis, worked a little bit around the southern states-but mostly up around here,” he said from his Hamilton home. “It was just a case of notifying the Toronto booking office that I’d be off this weekend for three days, and I had holidays coming up and long weekends. ‘If you need me, I’ll be available on a Monday or a Tuesday, I have two days off.’ Something like that, giving them a real schedule of my activities.”

Frank Tunney and Phil Lawson were the two that handled most of Larson’s bookings, and he became great friends with Whipper Billy Watson, Pat Flanagan, Fred Atkins and other southern Ontario mainstays. His Olympic experiences meant respect wherever he worked, even if it was misplaced. “A lot of the wrestlers, they associated my Olympic swimming background with wrestling. So as a result they treated me with quite a bit of respect. They were mistaken, of course.” The wrestlers also liked to hear police stories from his police beat too, just as his fellow cops liked working with George because he was big and he told fun wrestling stories.

Toronto wrestling historian Gary Will summed up the Maple Leaf Gardens career of “Irish” Tom Collins, which went from 1944 to 1962 (with a four-year gap from 1954-58). “At the Gardens, he wrestled against Nanjo Singh, Frank Sexton, Gino Garibaldi, George Scott, Hardboiled Haggerty, Sandor Kovacs, John Katan, and the entire brigade of other local prelim guys, like John Katan, Lee Henning, Tiger Tasker, Bunny Dunlop, Bill Stack, Jack Wentworth, Jan Gotch, and Dan O’Connor,” said Will. “Collins’ Gardens debut was in a semi-final against Frank Sexton, and that was the highest he ever got on the card. His match against Katan in 1947 was also second from the top, but otherwise he was almost always in the first or second match. He did get four wins over the years at the Gardens, against Ivan Kalmikoff, Bert Ruby, Jack Wentworth, and Pierre Deglane.”

Larson stopped wrestling as a part-timer when he had amassed enough money to build his house in Hamilton. “The only thing I wanted to do was build a house,” he said. “You’re just off welfare with a policeman’s wage.”

He recalled only one serious injury. “I sprained my ankle pretty bad in Buffalo. And when I got back, I had to go to work that night. I had a chap working a couple of hours for me. So I was throwing myself into a snowbank to go work. I stuck out the night anyway.”

Away from the ring (and the pool, football field and streets of Hamilton), Larson was married in 1939. “We were two little lovebirds. I always had an ambition to be an opera singer. If I do say so myself, I had a hell of a good voice. Lots of power.” His wife died in 1990 of asphyxiation, brought on in part by her battle with a brain tumor. They had three daughters and a son. Larson chuckles when asked about the grandkids, and figures he has 13 grandchildren and three great-grandchildren, but isn’t totally sure of the count.

Larson uses a walker or a cane today to get around, and is diabetic. His balance isn’t what it once was, and he can’t get out swimming very often. But his memory is incredible. “I sit here and think, and I wonder when my mind’s going to go,” he joked. To keep in shape, he still does curls with his weights and deep breathing exercises.

In 1999, after a party to celebrate his 85th birthday, Larson summed up his life for the Hamilton Spectator. “I wasn’t a big shot, but I got along with everyone pretty good. What’s most important is the people you meet and the friends you make.” His family is again throwing a party for him this coming weekend in Hamilton and many of his old friends will be there to fete his 90th birthday as well.