The promotion of his new movie has Sting out in the public eye again, but he wants to remind his fans that his wrestling career hasn’t completely closed. If the right offer came along, he’d be there.

For one, he seems some of his old friends and foes still going at it.

“Hulk, he’s not doing it right now, but never count him out. I can see him coming back and doing something,” Sting told SLAM! Wrestling. “Flair, he’s still out there doing it. Undertaker is still doing it, and some of the guys that were my generation-Hulk was before me, and so was Ric Flair-but the Undertaker, Steve Austin’s neck is pretty bad now, I guess. It seems like every time he’s out, he’s really not. He comes back. So he may come back. I think that I probably could do something but I’m not going to be able to do some of the stuff that I used to do.” 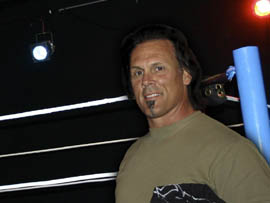 His most recent appearances have been in NWA-TNA on their old Wednesday pay-per-views. The door is still open with the promotion, Sting said. “[It’s] nothing that I’m looking to go do, but I’d entertain ideas. I want the storyline to be right and for it to be good and interesting.”

He seems himself as a potential leader for a new company even. “I’d like to be able to pave the way and make way. There are so many groups trying to pop up, and trying to do something. WWE is it. It would be pretty cool if somebody else, just for the sake of other wrestlers trying to come up, if there was a place for them to go. We’re hearing all the rumors of Ted Turner and that whole deal too.”

To this day, he is still the biggest name of the 1980s-1990s that never appeared in a WWF/WWE ring. He was indeed WCW’s ‘Franchise’. “It’s amazing that I never went up there,” Sting said. “I talked to Vince a couple of times throughout the years and came close on a few different occasions. Even recently talked with Vince McMahon and came close, but I backed away and backed off.”

Part of the reason that he backed off is that he wants to stay firmly committed to his family in California, seeing his two sons and daughter grow up. Though he loves his fans, he often finds it difficult to get worked up about leaving home. “By the time I’m out there and in the middle of doing it, and dealing with fans and all that, for the most part it’s good. But gearing up and getting ready for it, it’s hard for me these days. It’s just really hard. I’ve always been elusive over the years. I know that now I’m out there, partly because of this movie.”

He is even reluctant to get out and preach. “I have done some but I don’t want to go back out on the road and leave my family anymore. It’s okay to go out occasionally for a day or a weekend, something like that. I believe that God would just open the doors for me to be booked constantly. As a matter of fact, I have to turn down so many things, so many opportunities to go speak at a church or something like that because I’m involved in my own family now. I’ve got 14, 12 and 4, the ages of my kids. I don’t want to miss their football games. Gracie is my daughter, and she’s ice skating now, and I don’t want to miss that anymore either.”