It’s really early Thursday morning and John Morrison is up at the crack of dawn to promote the Royal Rumble. But wait, he’s not officially in the match yet — at least not according to the list of participants at WWE.com. What gives?

“Holy crap. This whole time I thought I was,” Morrison said with a laugh to SLAM! Wrestling, knowing that the pre-taped Smackdown airs Friday night. “I’m sure I’ll be in there.”

He is thinking big. 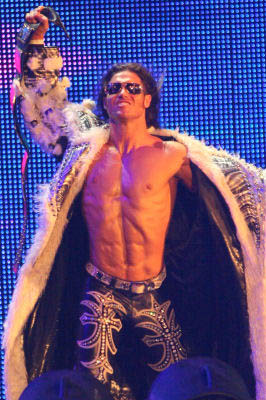 “My thoughts are, like Pinky and the Brain always said, ‘What do you want to do tonight, Pinky?’ ‘Take over the world.’ Same thing I plan to do every year — win the Royal Rumble. So far it hasn’t worked out for me to win the Royal Rumble and go on to main event Wrestlemania, but I think that’s what I’m going to try to do this year. That’s the thing about the Rumble, there’s 30 superstars involved, and it’s the most unpredictable, chaotic match of the year. So you don’t know what’s going to happen, anybody could win. If you do win, it’s one of those things where it can make your entire career. People go on and on about Maven throwing the Undertaker out of the Royal Rumble for years, and he didn’t even win. It was just something at that pay-per-view. It’s because it’s that big of a deal.”

“The main thing is that experience helps. I think when you’re in a match like that, staying away from the big guys is important,” he explained. “Sometimes, I need to pick strategic times and places to do a lot of my high-flying offense, because any time you’re going off the ropes, you’re putting yourself at risk to getting thrown out of the ring. That doesn’t mean you shouldn’t do it, because high flying, high risk stuff is kind of like my bread and butter. So just being more ring aware is what the experience gives me, more of a feel of what it’s like to be in the ring with 20 or 30 different superstars at the same time. Having that in mind, I need to find the right spots to use my offense without having it backfire, and I think that’s what having the experience gives me.”

The rapid fluctuations on the Smackdown roster with fresh blood continuing to push its way in has made Morrison one of the more experienced wrestlers on the show.

Morrison has been mired in a fight with the current Intercontinental champion Drew McIntyre, who seems to really be going places.

“Drew McIntyre, yeah, according to him, he’s [in Scottish accent] The Future or the Chosen One of sports entertainment. He is definitely someone who’s star is on the rise. He’s a very talented individual. He’s all that, definitely,” admitted Morrison. “Aside from his in-ring work, he’s got a long way to go to earn the respect of everybody in WWE. He’s a little bit of a brown-noser. He likes to take a lot of shortcuts, and play by his own rules — which I admire, a lot of the time, playing by your own rules and pushing the limits of breaking the law. I live by that same philosophy a lot of the time. But when you’re competing against someone one on one, I think it’s different than kissing someone’s arse — a-r-s-e — and cheating, and hiding behind the referee, getting counted out. That’s an example of a lame way of breaking the rules.”

“The Guru of Greatness” admitted that there are some similarities between a younger version of himself and McIntyre.

“The main thing he does in situations is he cheats the WWE Universe. He’ll take the countout for the win, he’ll push someone into an official, he’ll run around and kiss Vickie Guerrero’s ass, or Vince’s ass, and ask for a shot he might not have earned on his own merit,” he said. “When [Joey] Mercury and I came in, we were brash, but we were never really backed by the WWE corporate people. We were making our rules by cheating and winning and all that kind of thing. I don’t know, maybe I’m just saying this because it was me, but I think it was a lot cooler when we did it than what he’s doing now.” 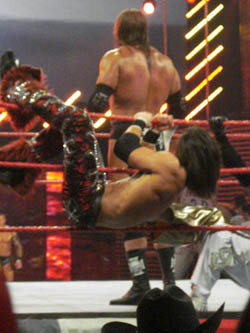 John Morrison outside the ring during the 2009 Royal Rumble. Photo by Mike Mastrandrea

McIntyre is hardly the only up-and-comer on the WWE roster. Who else is Morrison watching?

“I think if Dolph Ziggler gets a break at the right time, I think he’ll really break through. I think he’s real talented in the ring and underrated on the microphone,” he said of his former rival, before addressing his former championship partner. “I think The Miz, definitely, is improving week by week. He’s a very talented up and comer. I think the one thing he’s got going for him is he’s always himself, he’s always The Miz and he’s always super annoying. That makes people want to see him beat up, which is good for him.”

As much as Morrison wants to break into the main event picture, he realizes it can be a difficult process.

“I think my path has been a slow rise. I think a lot of people rise too quickly and they find out when they get there — I think Sheamus is going to find out — that they haven’t really earned the respect of the WWE Universe or the locker room, and they’re going to end up falling flat, falling back down the card and either walk back up to the top or just fall right down and stay down,” he said. “For me, it’s opportunity. The Royal Rumble is an opportunity, yes. It could end up being the opportunity that takes me to the next level. But I think it’s more than any one match or one thing. I think I need to take advantage of an opportunity like the Rumble or some sort of title shot, and get into that main event picture. It’s impossible to tell the future, but I think eventually I’ll get that shot and I’ll make the most of it because I’m prepared for it when it happens.”