ROH, PWG pulling out all the stops for WrestleReunion weekend

At past WrestleReunion events the weekend has included a legends wrestling show. This weekend WrestleReunion 4 takes a different twist with the future of professional wrestling with Philadelphia-based Ring of Honor and Los Angeles’ Pro Wrestling Guerrilla holding cards.

“Some of the folks I am involved with thought this would be a good approach. Ring of Honor had never been to Los Angeles before so we thought a Ring of Honor debut would be a good idea. Since we decided to have two days of wrestling, PWG is the local group out there with a very consistent following,” promoter Sal Corrente explained. “I don’t have exposure to them quite honestly but I took advisement from some folks. People seem happy with that choice too. It’s not like we are getting bombarded with, ‘Hey, where are the legends matches?’ We do have some legends matches with Muta and Jushin “Thunder” Liger and Larry Zbyszko.” 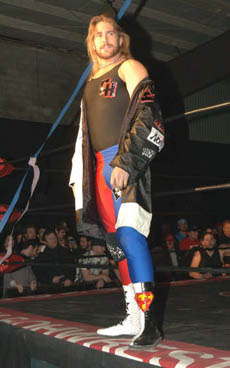 Chris Hero is set for a three-way bout with Rob Van Dam and Roderick Strong. Photo by Mike Mastrandrea

It was PWG’s association with Highspots, which is co-promoting the event, that opened the door for PWG to present its show — dubbed “Kurt Russelmania,” explained PWG promoter Excalibur.

“Pro Wrestling Guerrilla’s association with Highspots began just eight months after our first show, and now, over six years later, our relationship is stronger than ever. In that time both companies have grown considerably, and Highspots has reached a point where they are promoting a convention for wrestling fans all over the world. Thanks to the length of our relationship and our profile in the independent professional wrestling community (not to mention most of us live like 20 minutes away), I think Highspots was very eager to have Pro Wrestling Guerrilla be a part of WrestleReunion 4. It exposes Pro Wrestling Guerrilla to the fans that will be in attendance who may not be familiar with us. Beyond that, by having an event that features some of the best known names in professional wrestling from around the world, that can easily pay dividends down the road if, for example, someone picks up a DVD for Rob Van Dam’s name alone, and ends up becoming a fan of Pro Wrestling Guerrilla in the process. So the exposure is fantastic, plus the ballroom rental was covered by the convention, so that works out for everyone.”

For ROH owner Cary Silkin, it was a no-brainer. It was important however to work with reputable promoters after being involved in a 2007 convention disaster in San Francisco.

“The people that were running it wanted a premier attraction each of the nights in the form of a show. PWG, who is the top local promotion of the area, was natural. WrestleReunion asked if Ring of Honor wanted to be part of it. For us it was an easy decision and we’re happy to be making our second west coast appearance. The guys that are running this one, we have established relationships with and they are good people with a good track record. There is no comparison between this event and San Francisco. It should be a hell of an event. The talent roster of the legends and the autograph guests is good, they have two awesome wrestling shows Friday and Saturday with a lot of good special guests. I can’t wait to get the hell out of this cold weather. It has been very cold here this winter. I am looking forward to going out to California.”

Both shows feature special guests. Ring of Honor has an exhibition match between Larry Zbyszko and Scott “2 Hot” Taylor and Jushin Liger returning to the promotion for the first time since 2004 facing ROH Champ Austin Aries in a non-title match. 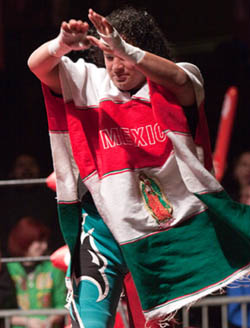 “I am really looking forward to his match with Austin Aries. Liger is one of the living legends. The guy is still talented it isn’t like having one of the legends that can’t really do it anymore,” Silkin said. “Having him against our world champion Austin Aries, even though it is a non-title match, it is going to be really exciting. I am looking forward to it, and there is some other great talent the next night on the PWG show including Rob Van Dam.”

PWG is pulling out all the stops with Van Dam, Muta, Liger and Super Crazy all on the card. It was difficult to narrow down the field and choose their opponents, recalled Excalibur.

“Deciding on the opponents for Rob Van Dam, The Great Muta, Super Crazy, and Jushin Thunder Liger was enormously tough. We went through a great many potential lineups before settling on what we have now, and this one is by far the strongest. The thing we look at as being the most important is not who ‘deserves’ to wrestle a big name special guest, but who has the best potential matchup. We have a locker room filled with insanely talented individuals, but each person knows that as a company, we are looking to put on the best events possible. We’re very lucky to have true professionals who can work toward the greater good. Without a core group of guys as dedicated to Pro Wrestling Guerrilla as our locker room is, I think the decision would have been a million times harder, if not impossible.”

Van Dam’s match especially has a buzz going, a triple-threat match with two of the most talented guys on the independent scene, Roderick Strong and Chris Hero.

“As a former Pro Wrestling Guerrilla World Champion and a member of the unofficial PWG MVP ballot, Chris Hero was always on the short list of potential opponents for Rob Van Dam. Despite his experience level, Hero is perpetually a student of the game, always taking new-found knowledge and techniques and melding them into his style. He’s truly one of, if not the most versatile wrestlers in the business today, which means he matches up nicely with just about anything Rob Van Dam may throw at him. Roderick Strong is another guy who is on the unofficial PWG MVP ballot, and he too was on the short list of potential opponents. Roderick had an incredible year in Pro Wrestling Guerrilla in 2009, and capped it off with a phenomenal effort against Kenny Omega in the 2009 Battle of Los Angeles, so we were eager to have him carry that momentum into 2010. Plus, he won our office fantasy football league, and asked to face Rob Van Dam in lieu of the cash prize. We were still having a tough time deciding, so we flipped a coin and it improbably landed on its edge, hence the three way match.”

“We always try to give the people the best cards that we can. It is extra special coming to Los Angeles because we don’t go to the west coast very much and there will be a lot of very knowledgeable fans at the show. We would like to go out of our way — as we do every show — to really impress everybody. The card sort of materialized out of its own. Aside from having a special attraction like Liger there wasn’t anyone going, ‘Let’s make this extra good.’ It is inherent in Ring of Honor and there are some great matches on the card. The Jerry Lynn vs. Kenny King match is coming to a head after many months. Jerry has been away for a little while, we are looking forward to seeing him. The 8-Man Tag War should be off the hook as well as Tyler Black vs. Joey Ryan.”

Having icons on the card, and at WrestleReuinion itself is a big deal to both fans and the stars of PWG, Excalibur said.

“I think just the knowledge of having someone like Stan Hansen or Bret Hart in the same zip code as an event makes wrestlers step up their game, so to have those guys, plus 20 other professional wrestling legends at the same convention as Kurt Russellmania will be a part of is extremely motivating. Sure, it might be nerve-wracking to know that someone you grew up idolizing may be watching you wrestle, but at heart, those legendary wrestlers are fans of professional wrestling. So if you go out there and have a good match, that is something that any fan, no matter who they are, can appreciate and enjoy. The fans of Pro Wrestling Guerrilla are extremely loyal and dedicated, so even Super Crazy or The Great Muta weren’t on the card, we would still have a fantastic turnout. But because of the involvement of The Great Muta, Super Crazy, Rob Van Dam, and Jushin Liger, plus the Wrestlereunion 4 convention itself, it’s a gigantic bonus to our fans. Kurt Russellmania is an event that we a very proud to be promoting, not only from a business standpoint, but also as a way to offer something special to our local fans who have been with us from the beginning.”