LOS ANGELES – There was a definite buzz in the lobby of the LAX Hilton, minutes from the Los Angeles Airport, as soon as you walked in the door. Fans milled about wearing WrestleReunion shirts and spotted participants checking in and wandering around. Whether it was Jay Briscoe running down the street or Austin Aries and Survivor‘s Johnny Fairplay chatting on a staircase, it was obvious something special was happening. 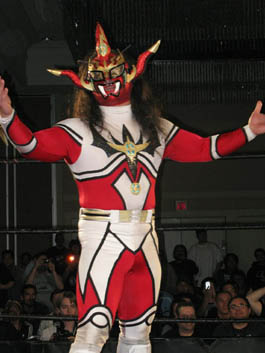 Fans lined up early for the FanFest, a collection of vendors who were in attendance. WrestleReunion promoter Highspots was a popular choice, with everything from wrestling masks to toys to belts available. Rikishi’s Knok Pro Entertainment was on hand recruiting future wrestlers and promoting future events as well as the Cauliflower Alley Club, NWA Legends, and Pro Wrestling Showdown.

If how the photo ops with Jushin Liger and Scotty 2 Hotty were run last night is any indication, fans can rest assured they are at a very professional event. The line moved quickly as awed fans took their moment to shake hands with one of the true legends of Japanese wrestling. With stars like Rob Van Dam, Bruno Sammartino, Demolition, Terri Runnels and Tammy Sytch among the names for today’s signing and photos, it will only be crazier — but it is clear Highspots is on top of it.

An hour-long meet and greet with ROH stars for SuperTicket holders let many fans meet a whole different generation of stars from the rest of the convention. While many have been featured on the west coast before, for many it was their first chance to meet stars of the eastern promotion. The Kings of Wrestling (Chris Hero and Claudio Castignoli) took lots of time with each fan to talk and take photos while El Generico and Colt Cabana goofed off across the room. Austin Aries, living and breathing his arrogant character, was a highlight, shooting of dry sarcastic comments through the entire session while plugging his A-Double t-shirts. Bill Apter, who is hosting many of the events this weekend, was also around taking photos and talking with fans.

Amazingly ROH was able to start at the scheduled 8:45 bell time despite a huge lineup and the hotel constantly adding chairs. The rabid fans — 775 of them — jam packed the ballroom for Ring of Honor’s Los Angeles debut, and the company made the most of it by displaying what it does best: professional wrestling.

After a solid tag team opener of Colt Cabana and El Generico defeating Scott Lost and Scorpio Sky and a crazy anything goes brawl with Necro Butcher pinning rival Erick Stevens, Roderick Strong and Delirious brought the serious wrestling to the show. Despite Delirious fleeing the ring after the first of Strong’s trademark brutal chops and begging “no more chops” the two continued to tear into each other with open hands across the chest. After a awesome, hard-hitting match, Strong put Delirious away with the tiger driver.

Despite being a slimy heel, hometown boy Joey Ryan received a lot of cheers as well as chants of PWG — his home promotion which puts on a card Saturday night. That resulted in opponent Tyler Black often being booed. A solid technical bout saw Ryan continually focusing on Black’s arm. Ryan came back after being powerbombed into the corner, but it was short lived and Black scored the win with a fisherman buster into a cradle. 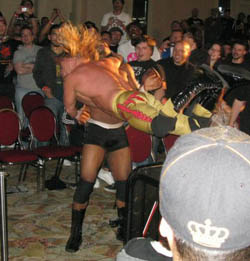 Jerry Lynn dives at Kenny King outside the ring.

Seeing Jerry Lynn wrestle is awe-inspiring. At 46 years old the man can still outperform men half his age, and proved it in an intense grudge match with Kenny King. King cut a promo saying that he did what RVD, The Sandman and Steve Corino failed to do — put Lynn out of the wrestling business for five months. He then promised to put him out of the walking business. A combination of brawling and crazy spots, including Lynn diving over the guardrail onto King and King doing a Ric Flair style flip into the barricade, seemed to be over when King used Lynn’s own cradle piledriver on him. As King picked up a limp Lynn, Jerry surprised him with a small package. King brought a chair into the ring and tried to use it, but Lynn dropkicked it into his face and hit a cradle piledriver, resulting in the referee reversing his decision.

After an intermission, Johnny Fairplay hit the ring, trashing the legends and in attendance for the weekend and saying that the only good world champion was David Arquette. So he brought the best Arquette — Trans-Identified sister Alexis. Fairplay was the guest referee for Larry Zbyszko vs. Scotty 2 Hotty in a WrestleReunion bonus match. Scotty was genuine when he praised the guys in the back for their passion, but stalling in front of this crowd does not work. The match was fortunately brief, with Fairplay breaking up the worm and Zbyszko, using a handful of tights, getting the win. Left alone with Scotty, it seemed like Fairplay was about to be a victim of the worm when Colt Cabana hit the ring, took out Scotty with the worm and then gave Fairplay the stinkface.

The evolution of Kevin Steen as a badass heel is complete, the man is actually quite scary and easily dislikable. His opponent, Human Tornado, took advantage early on with a dive over the top, but it wasn’t long before Steen was beating the holy hell out of Tornado. While Tornado made a valiant effort, Steen’s package piledriver ended the match. When Steen continued to beat on Tornado, Cabana returned to the ring. Steen left through the audience.

What followed was perhaps one of the most entertainingly spontaneous things I have ever seen in wrestling. The bottom rope had broken and the ring crew was scrambling to fix it, so Adam Pearce tossed ring announcer Bobby Cruise into the ring for a dance off that also included Colt Cabana, referee Todd Sinclair, and Ace Steel. Human Tornado, still selling Steen’s attack, hit the ring as well. The crowd exploded as Michael Jackson’s “Beat It” blared through the speakers and Tornado did a dead on move for move dance sequence… only to be attacked again by Steen in a moment of brilliant awesomeness. 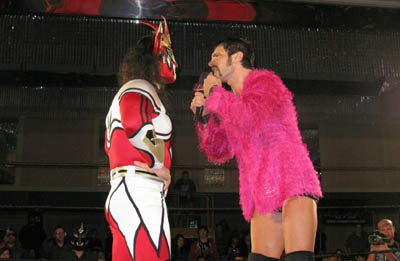 Liger and Austin Aries face off.

Once the ring was fixed, fans exploded as Jushin “Thunder” Liger returned to Ring of Honor to face ROH champion Austin Aries in a non-title match. Aries was busted open early on after a brainbuster on the floor. Many of Liger’s trademark moves like the surfboard and Liger bomb were not enough to put the champion away. Liger attempted to hit his running palm strike but Aries pulled the referee in the way, hit a low blow and a brainbuster and left the Japanese legend defeated. While this was a fantastic match, the ending was a disappointment. I have no problem with the promotion’s champion beating Liger but the low blow finish was lame.

Words can not do justice to the insane tag team main event of ROH tag team champions Jay and Mark Briscoe and new TNA signees The Young Bucks (Nick and Matt Jackson) and opponents The American Wolves (Eddie Edwards and Davey Richards) and The Kings of Wrestling (Chris Hero and Claudio Castagnoli). The action was so fast and hard hitting that there is no way to even attempt to type everything that happened. Much of the match early on saw Nick and Matt Jackson taking a beating. Several times all hell broke loose with ringside photographers running for cover. While the Kings of Wrestling tied up the Briscoes with submissions on the floor, Edwards powerbombed Nick Jackson and turned him over to score a submission victory with a Boston crab.

A few times during the night people like promoter Sal Corrente and host Bill Apter encouraged fans to attend the rest of the convention in order to ensure that WrestleReunion would return to L.A. If the first evening a sign of things to come, WrestleReunion 4 is going to be a special weekend indeed.

In less than 12 hours Jason Clevett has met other wrestling journalists, a Japanese Legend, most of the ROH roster, a trans-gendered Arquette, was hugged by Jerry Lynn, saw Terri Runnels, Tammy Sytch, and Animal wandering around, and took a ton of photos. What does day two have in store? Find out tomorrow!