Christmas is a time of reflection and giving. Looking back, it’s been a real blessing to get to know so many people involved in the wrestling business on a personal level, whether it’s the Christmas cards that arrive, the charitable giving I have been witness to, the fellowship lunches, or the wrestlers who play Santa Claus.

Wrestlers are a remarkable breed of people. The need to get in the ring and offer absolute trust in your foe is something few people ever get to experience. While with true love and deep friendship, all the guards come down, at no point are you ever in danger of hospitalization from a fall when something goes wrong; it’s just a bump in the road that you grow from. 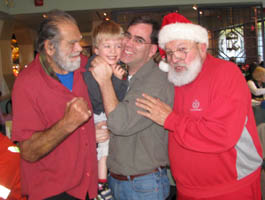 The Wolfman, Quinn and Greg Oliver, and Ron “Santa” Logue.

In the same way, I feel there’s often been a test on my part, as the writer, to prove a little loyalty, to show that it is not just about chasing the story.

It can be achingly painful, and a tearful reminder that wrestlers are people too, being exposed to their every day lives.

There’s the phone call from Theresa Dodd, the widow of Killer Kowalski — “Walter” to her. Her voice frail, failing at times, she is calling around to wish a Merry Christmas to the people that Kowalski thought highly of.

There’s the annual wrestlers’ buffet at the Mandarin Chinese restaurant in Burlington, Ontario, made up of wrestlers from the Hamilton area. It’s my third dinner, and the second time I brought Willie “The Wolfman” Farkus down with me (and the first time I’d taken him shopping at Walmart!). The fellowship between the men at the table never ceases to amaze me, yet there’s a hole this year — Billy Red Lyons has passed. Before getting underway with the feast, we’re informed that Johnny Evans — Rotten Reggie Love of the Love Brothers — isn’t there because his wife, Carol, died on Tuesday from cancer. There’s a visitation that afternoon at 2 p.m. Only a couple with prior commitments don’t go to the funeral home to pay their respects.

One of the men, Ron Logue, is dressed up in part of his Santa suit. He’s called upon to play Jolly Old St. Nick around town this time of year. It’s not the best suit to wear to a visitation, but that doesn’t stop him.

Playing Santa brings out something special in Ron. It was really fun to have him come down for a few hours at the beginning of December to play Santa at my son’s “Holiday” Party. He came by the house, shot the bull, looked at some old photos, and drank more coffee than anyone who had ever been to our place before. Since I was one of the organizers and had to set up, he stayed at home with my wife and son; probably my favourite memory from the whole evening was seeing my son walk hand-in-hand with Santa along the street, taking him to his school.

At the party itself, Ron was cool as a cucumber, suffering through the heat in his outfit, posing for photo after photo with wiggly bum after wiggly bum on his lap. He was even forgiven for being a little “frisky” with some of the moms who posed together with him later. Who wants a wet-noodle Santa Claus anyway? 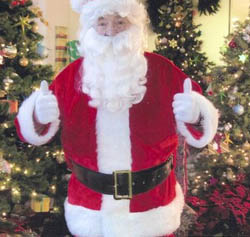 Equally worthy of a laugh are the photos of Paul “The Butcher” Vachon dressed up in the red suit. There are very few people I’d drive for ten hours round trip just to have dinner with, but I did that in early November for Mad Dog Vachon and Butcher Vachon, who’d assembled their family for a special celebration of Mad Dog’s induction into the Quebec Sports Hall of Fame.

Over the years, it’s been remarkable to get Christmas cards from a diverse collection of people, whether they are business associates, like WWE Canada, or wrestlers I’ve met at various functions over the years, like Don Leo Jonathan or “Big” Bill Anderson, or even some I’ve never even met, just talked to or corresponded with. The coolest card this year came from my friend Shuhei Aoki, a Japanese superfan and a super guy. It’s in Japanese, with some English on it, and my son showed it off proudly to everyone who came over during the holidays.

But it was a toy drive in Milton, Ontario, that really drove home the notion that Christmas is about far more than Santa, Jesus Christ, shopping and eating. 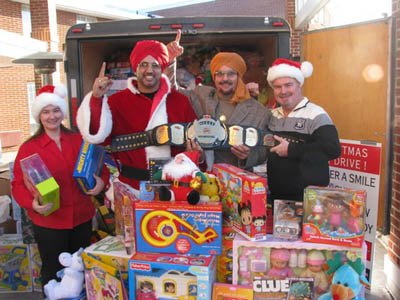 Using his influence around town, wrestling legend Tiger Jeet Singh was able to really rally the troops for Troy’s Toy Drive, run by Troy Newton. Singh, a Sikh, was able to get the posters for the event up in area mosques and temples, helping spur on the giving regardless of faith. His son, Tiger Ali Singh, displayed that with his get-up — a Santa suit, wrestling belt, and his turban. It was East meets West, he said. “People of all faiths can come together for children in need,” said Tiger Ali.

At the celebration at Troy’s Diner, broadcast by Breakfast Television, the Singhs were regularly in demand for autographs, rivaling Canada’s best-known hockey dad, Walter Gretzky.

The toy drive was so successful, with $30,000 in toys and money donated, that some of the extra money was used to buy food for a food bank. The toys went to the Salvation Army, with a small portion going to The Hospital for Sick Children in Toronto — at the insistence of the Singhs. Those toys were delivered with the federal Minister of Government Services, Harinder Takhar, along to help.

“This opportunity to give back truly means the world for our family,” said Tiger Ali. “Less than five years ago my nephew was a patient at Sick Kids when he was diagnosed with leukemia. With God’s grace and the helpful staff at the hospital he survived after he received a bone marrow transplant.”

Greg Oliver has been writing about pro wrestling since 1985, and is fortunate to have made so many friends in the business. He can be emailed at [email protected].