WINNIPEG — Have you ever watched the usual weekly wrestling fare on TV and found yourself longing for days gone by, when imposing bruisers of various sizes and fighting styles duked it out in smoke-filled halls?

Well, keep the small venues, take out the smoke (thank you, smoking bans), add Winnipeg’s “Outlaw” Adam Knight, and you’re taken back in time with Knight’s inaugural DVD, Hits, Highlights and Horrors, a compilation of eight of his favourite matches. 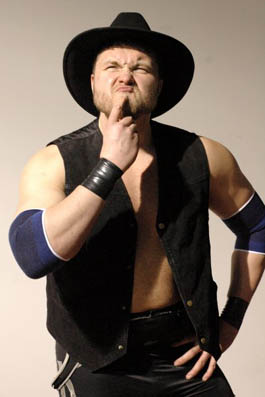 A viewer could easily find himself wincing or even exclaiming “ouch!” watching Knight take on opponents like TNA’s Samoa Joe, with whom Knight engaged in a nearly 20-minute back-and-forth violent encounter.

“Joe and I got along pretty good, had a very simple chat before the match, nothing crazy,” Knight told SLAM! Wrestling. “I think my size surprised him and we worked accordingly, called very little and just went out there and fought. The only thing that was rough was the Muscle Buster; that wrenched my neck out a bit, but nothing I can’t handle.”

Other big names the Outlaw faces include Animal and Hawk, (The Legion of Doom), Jim “The Anvil” Neidhart, and Buff Bagwell.

A contest against fellow Winnipegger and Ring of Honor’s own Kenny Omega showed Knight could also work well against smaller, quicker opponents.

“It’s always a pleasure to test my abilities against him,” said Omega. “For a man of his size, he’s deceivingly quick and agile. Top that with his natural ability to perform and you have one of Canada’s greatest heavyweights. Wrestlers like him have certainly become a rarity these days.”

Knight seemed particularly proud of his brutal chain match against Chi Chi Cruz, revealing it filled him with confidence about his own skills.

“I was very honored to be working the program with Cheech because he was one of the guys I was most intimidated of and respectful of when I was breaking in. His knowledge and abilities are second-to-none, and his willingness to go even-Steven with me throughout that feud meant more to me than I can say,” Knight said. “In many respects, that series of matches were what convinced me that I could hold my own with anyone in the world and feel like I’m on the same page. The chain match was vicious and violent, and we both went into it with the idea of leaving it all in the ring, come hell or high water. To this day, it’s one I get asked about by the fans who were in attendance.”

Another notable match was against Moses Luke, a nearly 400-pounder who was probably wrestling closer to 320 back in 2001 when he and Knight locked up. A top rope leg drop by Luke was somewhat reminiscent of ECW’s Balls Mahoney, a comparison with which Luke isn’t unfamiliar.

“I used to get that a lot — and I mean a lot — even (Steve) Corino made jokes about it, saying how he has to tell Balls he has a twin in Winnipeg,” Luke said, and later added: “I always had fun working with Knight, every time we got in the ring together.”

Now, for those of you spoiled by the high production values of WWE and TNA, the single camera filming Knight’s matches might seem quite primitive and maybe even a drawback. Maybe there’s a solution for you. Dim your lights, turn up the volume, and put yourself at the camera’s-eye-view, surrounded by rowdy spectators. And become engrossed in the action in the ring. You won’t be disappointed.