Not willing to wait for President Barack Obama and the rest of the nation to agree on how to make fundamental changes to the U.S. health care system, 16-year-old Jasmine “Jazzy” Jordan is taking the initiative to raise money and awareness by running across the entire country.

The Junior at Ashby School in Ashby, Minnesota saw for herself what can happen to people without health care insurance when a driver working for her parents’ trucking firm died of cancer. From then on, she decided she needed to do something to expose the flaws in the system, so that in the future, people without medical coverage who cannot pay for the treatments they need will have more options. SLAM! Wrestling caught up with Jazzy during a break she was taking near Phoenix, Arizona. 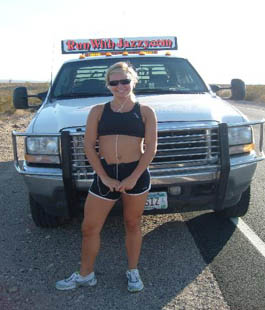 “My mom had a friend by the name of Sheila Grothe and she was 38-years-old, and she was working for my mom driving pilot cars, and you could tell she was sick — she was always coughing and she wouldn’t go to a doctor. And when she finally did, they diagnosed her… they found cancer in her lungs and by that time it spread to her brain, but she lived a year-and-a-half with it. I saw her a couple days before she passed away in the nursing home… it killed me to see her like that and then her family struggling with medical bills because she had no insurance.”

Grothe passed away April 17, 2009. The morning after, Jazzy told her father Lee, a former professional wrestler known as “Gentleman Jimmy Jordan,” about her intentions.

On September 1, she started her run in Palm Springs, California (her original plan to begin in Los Angeles was cancelled due to the smoke from the fires), and she has been running from 17 to 21 miles a day since as she heads to New York City.

“My mom’s working like crazy to help me make this run possible financially, and my dad’s out here following me every step I take with the truck.”

Lee also helped by contacting the St. Christopher Truckers Development and Relief Fund, a not-for-profit organization that provides financial assistance to professional truck drivers with medical problems who cannot afford health care. The fund also conducts research, and has found that over 70% of the 3.2 million professional drivers in the U.S. have one or more serious health problems — like obesity, diabetes, sleep disorders and cardiovascular disease — but that they lack the same access to health care as most Americans. The money Jazzy raises will go to the fund.

Her decision is even bolder than it might seem on the surface, as her cross-country journey put on hold her ambitions to compete in the 2012 Summer Olympics.

“I was training with the guys from the Ukraine for about a year, and trying to make the 2012 Summer Olympics — but that was for shorter distance,” she joked. “I’m just going to see how my body handles this run first. Because I had to change all my training from trying to make the Olympics to doing this run, so I just put that on hold.”

Jazzy’s run has received support from Minnesota Governor Tim Pawlenty, as well as random people who have caught up with her and jogged alongside her for as long as they could. And of course, her parents could not be happier with what she is doing.

“Jazzy’s run and sheer commitment and dedication is second to none,” said her delighted father Lee, whose pro wrestling debut came in 1983-84 in Portland, Oregon. “She is so determined to make a difference in the health care system and in people’s lives. I could not be more proud of my daughter for standing up at her age, recognizing there is a health care problem in this country, and setting her life aside and wanting to do something about it. It’s her time to shine and take the spotlight.”

Jazzy seems to have gleaned some of her athleticism from Lee, who trained with Owen Hart, his brother Bruce, and Les Thornton, and went on to wrestle in Winnipeg for Tony Condello. Jazzy, however, has no recollection of her dad in the ring.

“Jazzy was pretty young and didn’t like seeing dad getting hurt,” he said.

Still, Lee has managed to make a significant impression, instilling in his daughter a confidence and determination in all of her athletic endeavours.

“When I was younger, I was always into sports and every time I felt like giving up, I could hear my dad’s voice from the back of my head saying, ‘No one remembers who comes in second,'” Jazzy recalled. “So that’s always been motivation for me, and to keep going also.”

“I had a chance to live my dream as a wrestler and have always taught the kids (three boys and one girl), that if they have a dream, to put everything they have in it,” Lee said. “Jazzy chose running and that’s not a team sport, so if you’re going to do it, be the best. There’s no halfway athletes that ever went anywhere. Second is just the first loser.”

Given her spirit and resolve, and the support behind her, it is a safe bet that Jazzy will come out a champion.