Karl Von Brauner’s passing on July 5, 2009, in northern California at the age of 78 went unnoticed by the wrestling world in which he once headlined as a hated German heel, one of four men who portrayed Von Brauners. And that’s just the way he would have wanted it.

For the last number of years, Brauner — legally changed from Doug Donnan — was a bit of a recluse. He lived without a phone, carrying just a pager to return calls of his choosing. Up in the air as a crop duster, he could do his job and return home. No one asked him about his past. 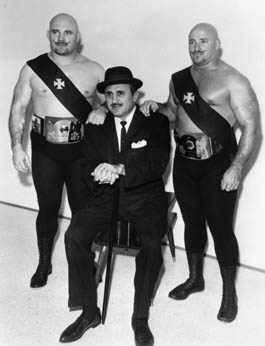 “He was pretty private. He didn’t really talk about [wrestling] a whole lot,” said Chris Sherry, who is married to Brauner’s niece, and lives in Stirling, Ontario, which the entire Donnan clan called home. “He was here a couple of times and I talked to him. He was pretty quiet about it. He didn’t want anybody to know who he was or where he was or anything about him.”

After marrying into the Donnan family, Sherry decided he wanted to learn more.

“I didn’t know anything about him. Then after we got married, he showed up here. My mother-in-law pulled out a whole bunch of pictures of him,” he said.

What Sherry would have seen was a 5-foot-10, 215-pound wrestler, with shaved head, mustache, black tights, and boots with an Iron Cross.

Promotional lines said that the Von Brauners descended from a “line of Teutonic royalty.” At their peak, the Von Brauners, with their despised manager “Gentleman” Saul Weingeroff, were certainly wrestling royalty.

“One of the greatest teams that I ever saw was the Von Brauners because you had a Jewish manager managing two Nazis,” said “Cowboy” Bill Watts in The Pro Wrestling Hall of Fame: The Tag Teams. “My gosh, the Von Brauners had their gimmick down, Kurt and Karl. They were polished; they were immaculate when they went to the ring; they knew how to work.”

“Cowboy” Bob Kelly first saw the Von Brauners in Louisville, Ky. “My opinion is when they had Saul as a manager they were the best tag team in the world at that time. They got the heat by wrestling, working holds, tagging in and out a lot. Then they looked so much alike, when Saul would get the referee’s attention they could switch. Everything they did was just so smooth,” he said.

“They” is a key word when describing the Von Brauners tag team. 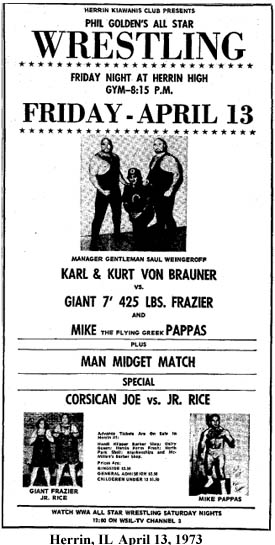 During their 15-year run, the Von Brauners would compose of four different men — two of whom had legitimate German ties — and two different managers — Weingeroff and Gerhardt Kaiser for only the team’s last territory in San Francisco.

Jimmy Brawner, from Tennessee, was the original Kurt Von Brauner. His parents were from Germany, and he spoke the language, adding credibility to the act. He died June 4, 2004 after a stroke.

Willi Kurt Rutkowsky was the fourth Von Brauner at the end of the ’60s until the team disbanded in ’74, replacing Eric, who had retired to join the fire department in Memphis, and now lives in Covington, Ga., as a new Kurt Von Brauner. Born in Germany, Rutkowsky was interned by the Nazis during World War II. After the war, he built his body back up and became a wrestler in Europe. He was also known as Kurt Von Stroheim. Rutkowsky died February 17, 1993.

The Donnan boys were raised on dairy farm near Stirling, which is close to Belleville, and the farm also grew hay, oats, barley, and wheat.

The athletic brothers drifted west, where Doug gave out his name as Donovan, since Donnan wasn’t a familiar name.

“[Doug] was with the telephones, a telephone lineman for quite a few years up there around Edmonton. I was in the Canadian Air Force for a few years, so we were out in that part of the country,” recalled Ronald “Red” Donnan/Donovan/Eric Von Brauner, who is two years younger than his brother.

They both used to work out on the mats at the gym. “I got to know some of the pros, and started working out with them, and one thing led to another,” said Donovan. Stu Hart took a shine to Doug, who’d been playing junior football in Edmonton, and started grooming him to wrestle. “He was just the type for wrestling…stout and a good athlete,” Donovan told Scott Teal’s Whatever Happened To … ? newsletter.

The brothers moved back home, and Doug got Red training to be a wrestler in Detroit under Bert Ruby.

Out in Oregon, a territory that traditionally let the smaller men succeed, the Donovans found a home, a lawsuit — and, later, a gimmick.

In 1956, Doug Donovan was wrestling in Albany, Ore., when he felt a sharp pain, and kicked out at his tormentor — a 73-year-old woman. She sued Doug for $75,000, but attorneys produced a two-inch needle found near her seat with which she had skewered Donovan.

Red Donovan was there that night, injured, but watching the bout. “This woman walked halfway around the ring and she turned and jabbed my brother in the leg. His instinctive reactions were to turn and he brought up his foot and Lord, she cleared out four or five rows of chairs,” he told the Ring Around The Northwest newsletter. “I think it was more of a push than a kick.”

Dick Steinborn gets credit for suggesting Jimmy Brawner and Doug Donovan team. He had wrestled Red and Doug Donovan in the Carolinas before heading to Houston to work for Paul Boesch. On his way to Houston, he ran into Brawner in Louisiana and said: “I saw your twin in Charlotte (Doug Donovan). He looks like your twin.” A few weeks later, Steinborn headed back east and stopped in Nashville, Tenn. to see Saul Weingeroff. There on the couch sat the Von Brauners, heads shaved. The transformation stunned Doug’s brother Eric. “They actually looked like twins. They actually looked more like twins than he and I did,” he said.

In January 1960, the newly christened Von Brauners went off to Florida, Oklahoma — anywhere their unique brand of mayhem was needed.

“We took different paths for a while,” explained Red Donovan. “I was always in contact with him.”

The team certainly had fans in their fellow wrestlers — and wrestlers and managers to be.

“I found it very hard to follow them,” said “Dandy” Jack Donovan, explaining that the Germans provided “convincing work every night no matter how big or small the town.”

Jimmy “The Mouth of the South” Hart was one of those who loved the tag teams. “I was in high school, and I’d walk to the Coliseum up there. I’d stand in line outdoors. They’d come out and take kids to sell Coca-Colas. Well, I always really hustled and sell my drinks real fast so I’d get picked every week. I’d really hustle so I could watch the main events, semi-main events. Usually it was Sputnik Monroe, but the Von Brauners, the Von Stronheims, all those great teams, the Kangaroos, the Medics, the Interns … I just always loved the tag teams. I thought it was so cool the way they would tag in and out behind the referee’s back, double team the guys. … Everybody had matching outfits and I thought that was so cool because they looked alike.”

In a Whatever Happened To? newsletter, Tom Jones recalled being a fan at ringside in Indianapolis. “The Von Brauners had a way of walking out where you just wanted to get up and kill ’em. They were good heels. I was just a mark. I didn’t weigh 200 pounds. I think I weighed about 195 pounds. (laughs). I took a shot at. I think it was Karl. I hit him and out the door I went. I mean, I was gone. Two years later, I’m in the business, right?. He walks in the dressing room and I looked up. ‘Oh, God. He’s gonna kill me.’ I turned my back around and started stringing my boots up. He walked by and set his bags down, then sat down and stared at me. I wouldn’t look up. Finally, he got up, put his hand under my chin, raised my head up, and says, ‘I know you.’ I blurted out, ‘Man, I was just a mark. I’m sorry.’ (laughs). He laughed and said, ‘You did a good job there, kid.'”

When Jimmy Brawner decided to step aside, it was natural for Doug to call his brother. “They agreed to separate, not because of any dispute or anything, but Jimmy had some things he wanted to do. Of course, Saul Weingeroff was the manager. Karl and I knew we’d probably be back together,” said Red. “So we got back together, and we were good together for a while. Then I quit, I left.”

The final incarnation of the Von Brauners are most associated with the San Francisco territory in the early 1970s, with Rutkowsky in the Kurt Von Brauner role, and by “The Great Kaiser” Gerhardt Kaiser, wearing his German military style outfit. 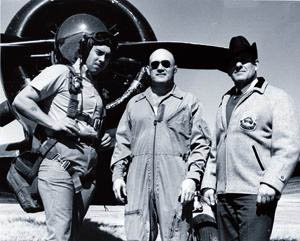 Karl Von Brauner found success, if not longevity, with Al Costello as The Internationals. “We didn’t see eye to eye,” Costello said in 1993 of a short-lived team with Louie Tillet, which he spun into a pairing with Von Brauner, “and I left for Nashville, Tennessee in 1966, where I met up with Karl Von Brauner. With ‘Playboy’ Gary Hart as our manager, we wrestled as ‘The Internationals’ in Texas and Detroit.”

After wrestling, Sherry said Brauner settled in the Lone Star State. “He was selling planes in Texas, and then he started crop dusting. He actually crashed and burned himself pretty bad. Then he just kept crop dusting,” he said. “He only retired maybe four years ago. He was 74 when he finally came out of the air.”

Brauner had a stroke a year ago, and never got his speech back to any significant degree. He shuttled between his two sons, Jeff in California and Chris in Colorado.

“It surprised us when he did have a stroke because he was in such great shape,” said Sherry. Brauner had open heart surgery as well, said Sherry. “The doctors were surprised because it took them an extra two hours to operate because of the muscle cell in his chest at 77 years old. He was in good shape.”

He was also stubborn to the end, said Sherry. “He was a pretty proud man. There wasn’t much helping him. He’d help himself before anybody else would ever help him.”

–with files from Steven Johnson